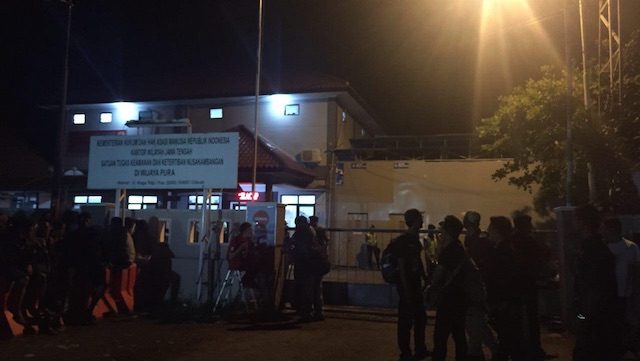 According to the Attorney General for General Crimes Noor Rachmat, of the 14 death row convicts who were to be executed, only 4 pushed through namely Indonesian Freddy Budiman, Senegal’s Osmane Seck, and Nigeria’s Michael Titus Igweh and Humphrey Jefferson.

The 10 others were spared although Rachmat did not elaborate on how the decisions were made.

The signs the execution would happen tonight were there.

Throughout the evening, lawyers and spiritual advisers of those sentenced to death came one by one to Cilacap’s sea port, the entry way to Nusakambangan island where executions by the government usually take place.

Buses carrying families also arrived throughout the night, to transport the families to the prison island where they claimed the bodies of those executed. Earlier in the day, family members cried, pleading for a last-minute reprieve for their loved ones.

Security was high around the port as media and locals flocked to the port’s gate, as news of the possible executions spread.

It was originally thought that the executions would take place on Saturday midnight, July 30, but various individuals confirmed it would be done a day earlier.

On Twitter, the lawyer of one of the accused, Ricky Gunawan from the Legal Aid Institute, tweeted Friday evening at 6:50 pm, “Execution is confirmed tonight. I will head to Nusa Kambangan shortly.” He was spotted by media at the Cilacap port soon after his tweet.

The executions were the 3rd under President Joko “Jokowi” Widodo, and the first since April 2015, when two members of Australia’s Bali 9 were also executed. In 2015, the Indonesian government executed 14 convicts in two batches.

The 14 that were scheduled for execution this time around were convicted for alleged drug trafficking.

Human rights groups and international organizations like the United Nations, the European Union and Amnesty International condemned the government’s plans to execute the convicts. The capital punishment is not permitted by international law.

Before the executions, embassies and families lodged appeals, alleging some of those scheduled to die were not given fair trials, or were subjected to abuse and torture under the hands of the police.

Among them was the appeal of the Pakistan embassy to spare their national Zulfiqar Ali, who says he was forced to confess under torture by police and was not given a translator during his trial. Ali was not executed.

The family members of Nigerian Michael Titus Igweh also asked Jokowi to review his case, as Igweh said he was electrocuted by police forcing him to confess, but he was eventually executed.

The most heartbreaking plea comes from one of the convicts themselves, Merry Utami, 42, whom activists say was used as a drug mule without her knowledge. Authorities found 1.1kg of heroin in her bag at the Soekarno Hatta international airport in Jakarta in 2002.

She wrote a letter to Jokowi asking for forgiveness and for a chance to live. Utami was spared. – Rappler.com