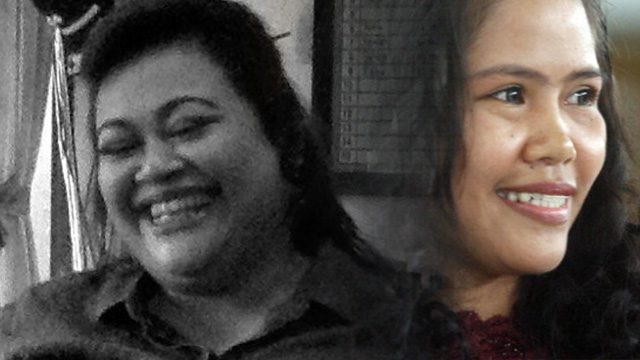 Facebook Twitter Copy URL
Copied
Both women were scheduled to face the firing squad for alleged drug trafficking, but both were spared last minute by the Indonesian government

The two women are on death row for alleged drug trafficking but the similarities between both go beyond their gender and supposed crimes.

Here are 5 similarities between the two, who have galvanized human rights groups and who have shared the same fate:

1. Both are said to have been drug mules

The story of how both women ended up behind bars are both stirring.

Mary Jane Veloso, 31, was arrested in 2010 for allegedly smuggling into the country, 2.6 kilograms of heroin through the lining of her suitcase. Veloso, a single mother of two from Nueva Ecija, had flown to Malaysia with the intention of securing a job as a domestic helper. She claimed that her recruiter, Maria Kristina Sergio, had duped her into flying to Indonesia and that the suitcase was given to her by Sergio. Veloso has consistently maintained her innocence. Utami, 42, is also a former domestic worker who was allegedly duped into trafficking 1.1kg of heroin into the Jakarta airport in 2003. Also a mother of two from Sukoharjo, Central Java, she was flying from Nepal after a holiday with a Canadian man who befriended her and gave her a leather bag – a bag authorities later found was stuffed with heroin. Utami insists she too was an innocent and unknowing drug mule.

Human rights activists have constantly pointed out that both Veloso and Utami were not given fair trials.

According to Veloso’s laywer, Mary Jane wasn’t able to defend herself well. First, they said she was not given a lawyer or translator when the police were interrogating her in Bahasa Indonesia, which she did not understand at the time. Then during her trial, the court-provided interpreter translated the proceedings from Bahasa Indonesia to English, which Mary Jane was not fluent in. Third, her lawyer at the time was a public defender provided by the police.

Utami’s lawyers meanwhile said she was threatened rape by police when she was arrested, and tortured under police custody. Under psychological stress, Utami was forced to sign police reports that implicated her.

Until the end, appeals were lodged for both women in an attempt to save their lives.

Veloso’s case was lobbied by Philippine diplomats in the days leading to her execution, with former Philippine President Benigno Aquino III personally speaking to Indonesia President Joko Widodo. President Jokowi also met with a local migrants rights advocate and representatives from 3 trade unions a few hours before the scheduled Indonesian executions, all of whom urged Jokowi to spare Veloso’s life. 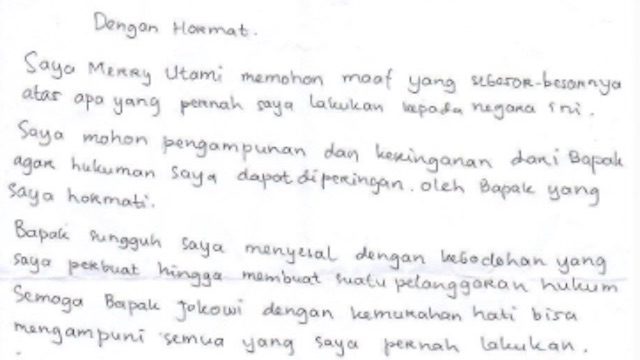 Utami too was backed by various rights groups including National Commission on Violence Against Women and Indonesia for Mercy, who held protests and vigils in Cilicap and the presidential palace. But Utami herself refused to die without a fight. After her name was announced among the list to be executed, Utami wrote a letter to the president in Bahasa Indonesia dated July 26, asking for pardon. While she maintains her innocence, it is a requirement for convicts to admit to their fault when asking for clemency.

Both Veloso and Utami are Catholics, and both turned to their faith during their time in prison. Veloso’s parents describe their daughter as a different person from the one they knew before she was put behind bars, saying she is much more religious now since her ordeal. Utami too is described by human rights activist Yuni as deeply religious, having recorded spiritual songs related to Catholicism.

While both were distraught upon first hearing the news of their looming executions, both were calm in the final hours before their deaths according to their families, appearing to have accepted their fate.

Perhaps one of the most compelling similarities between the two is that both women were spared last minute from execution.

Veloso’s execution was delayed following the surrender of her recruiter, whom she accused of duping her into flying to Indonesia and planting drugs in her suitcase. Indonesia said it will wait for the ongoing case of the recruiter in the Philippines. As for Utami, it is unclear why exactly she was spared and whether her personal letter and the appeal of rights groups made a difference – or if it was simply the vicious thunderstorm on the night of her scheduled execution that deterred her death.

While both remain on death row, their delayed executions give the women an almost second life – having both been taken to Nusakambangan execution island to be killed, only to live another day. – Rappler.com