Up to 16 feared dead in Texas hot air balloon crash 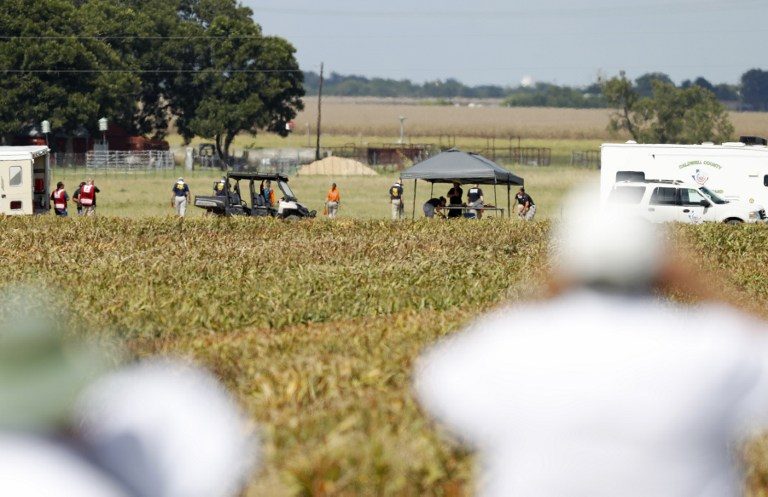 Facebook Twitter Copy URL
Copied
(UPDATED) Up to 16 people are feared dead in what is believed to be one of the deadliest hot air balloon accidents in history, after a fiery crash in central Texas

LOCKHART, Texas, USA (UPDATED) – Up to 16 people are feared dead in what is believed to be one of the deadliest hot air balloon accidents in history, after a fiery crash in a central Texas field Saturday, July 30, officials said.

The accident took place shortly after 7:40 am local time (1240 GMT), when the balloon crashed outside of Lockhart, around 30 miles (50 kilometers) south of Austin, Lynn Lunsford of the Federal Aviation Administration (FAA) said in a statement.

“It does not appear at this time that there were any survivors of the crash,” the Caldwell County sheriff’s office said.

“When the Emergency Responders and the Sheriff’s Office arrived on the scene, it was apparent that the reported fire was the basket portion of a hot air balloon,” it added in a statement posted on Twitter.

Margaret Wylie, who witnessed the crash, told broadcaster TWC News Austin that she first heard a “woosh” then popping before seeing the flames.

FAA investigators were on their way to the site, Lunsford said, with the National Transportation Safety Board taking charge of the probe.

NTSB lead investigator Erik Grosof did not confirm the number of deaths or injuries, telling reporters only that “right now we have a number of fatalities.”

The FBI’s evidence response team in San Antonio has been asked to assist in the investigation of the crash, the cause of which was still undetermined, he said.

Texas Governor Greg Abbott offered condolences to those affected by the crash.

“Our thoughts and prayers are with the victims and their families, as well as the Lockhart community,” he said in a statement.

A photo posted on social media apparently depicting the accident showed a balloon in the air with huge flames spurting underneath.

“It was a fire, a big ball of flames. You could tell nothing of what it was,” Don Schulle told local TV station KYTX from the edge of the field where the balloon crashed.

Police and rescue vehicles could be seen parked along the field through which a large power line runs.

In 2013, a sunrise hot air balloon flight over Egypt’s ancient temple city of Luxor caught fire and crashed, killing 19 tourists. The pilot and one other survived by jumping from the balloon.

Hot air balloon crashes are rare in the United States. The NTSB investigated 760 such accidents between 1964 and 2013. Of those, 67 were fatal.

Three people died in May 2014 during an air balloon festival in Virginia when a balloon hit a power line and burst into flames while landing.

Hot air balloons use propane gas to heat air that keeps them afloat. They are regulated by the FAA, which requires balloon pilots to be certified and for balloons to have air worthiness certificates.

The FAA inspects the balloons used for commercial ventures after 100 hours of flight time or at least once a year. – Rappler.com