Use the Gospel as your GPS, Pope tells huge Mass in Poland Facebook Twitter Copy URL
Copied
(3rd UPDATE) Speaking at World Youth Day 2016, Pope Francis calls on tech-savvy youngsters to 'download the best link of all, that of a heart which sees and transmits goodness without growing weary'

BRZEGI, Poland (3rd UPDATE) – Pope Francis celebrated Mass on Sunday, July 31, with over 1.5 million pilgrims in a vast sun-drenched field, wrapping up an emotionally charged trip to Poland with some choice technological metaphors.

In a nod to today’s internet-dominated world, Francis urged the congregation, who had traveled to Poland from all over the world, to “download the best link of all, that of a heart which sees and transmits goodness without growing weary.”

“Make the Gospel your own, so that it can serve as a satnav for you on the highways of life,” he said during the high spirited service.

Even the music was given the techno treatment, with youngsters, nuns, and even some bishops leaping and twirling to hymns beefed up with a thumping dance beat.

High-spirited teenagers, boy scouts, priests, and families had camped under the stars in the vast “Campus Misericordiae” (Field of Mercy) near the city of Krakow ahead of the final Mass of a week-long Catholic festival.

Francis encouraged the assembled faithful to be dreamers who believe “in a new humanity,” one that “rejects hatred between peoples” and “refuses to see borders and barriers,”

Hundreds of thousands of people had streamed to the grassy site on Saturday, July 30, with folding chairs, sleeping bags, umbrellas, and sun-hats. 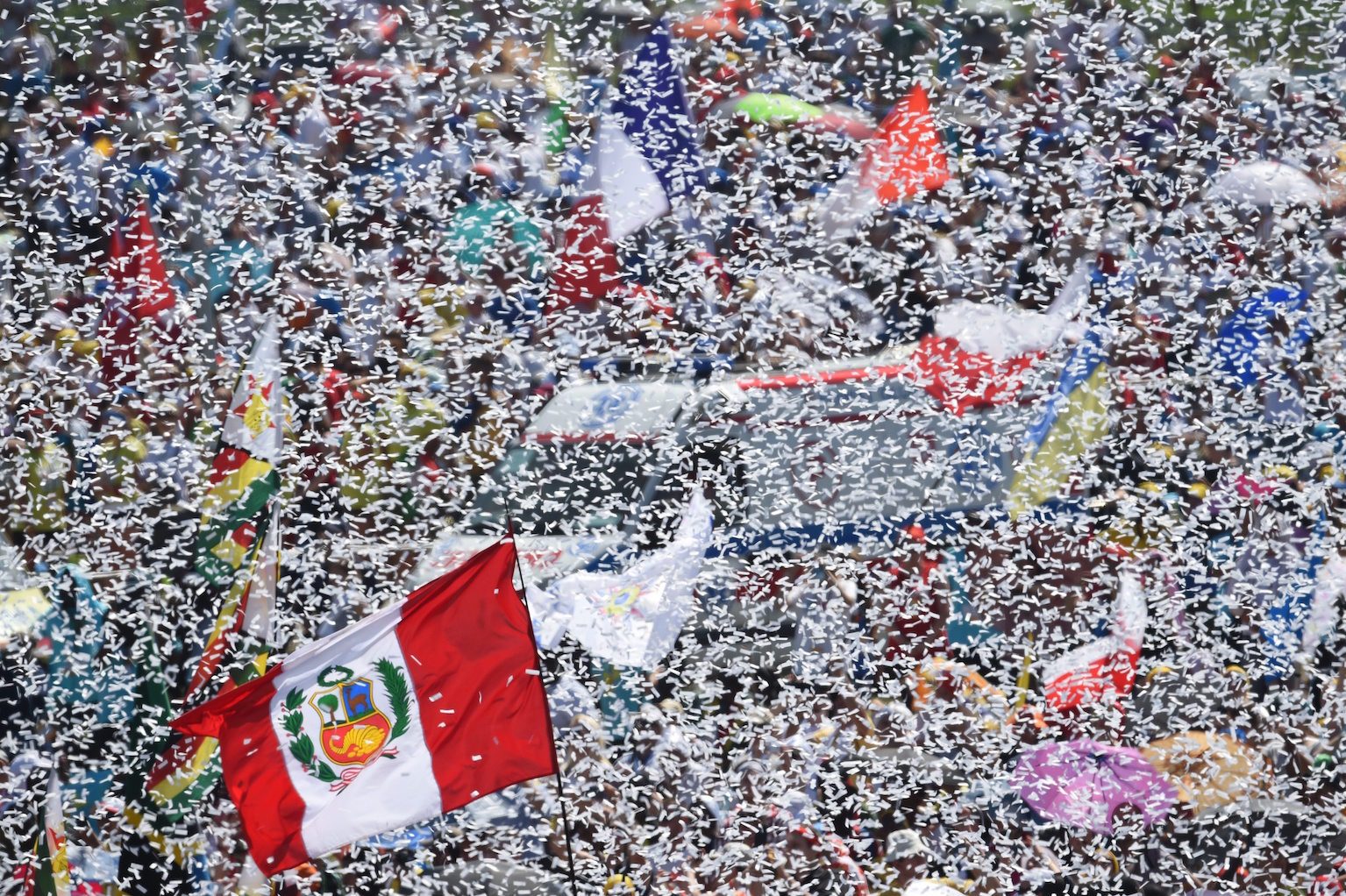 ‘Trip of a lifetime’

“This is the trip of a lifetime, for me and my whole family,” said 29-year old Mexican pilgrim Isaac Victoria, as volunteers handed out bottles of water to the thirsty crowds.

At the evening vigil on Saturday, Francis warned that today’s technology also had its dangers, chastising “drowsy and dull kids who confuse happiness with a sofa,” and urging them to get out and live life rather than spending it glued to their smartphones.

Francis said the next World Youth Day would be held in Panama in 2019.

Latin America’s first pontiff had faced stiff competition at the start of his 5-day trip with the memory of immensely popular Polish pope John Paul II, whom Catholics recognize as a saint, but quickly made the festivities his own.

After visiting the Nazi death camp in Auschwitz, he warned that the cruelty seen there “did not end” with World War II.

The “world is at war,” Francis said, but the way to “overcome fear” was to welcome people fleeing conflicts and persecution – a message with particular resonance in Poland, which has taken a hard line against refugees.

On Saturday he prayed for God to rid the world of the “devastating wave of terrorism.”

“In these dangerous times, he is convincing people not to be afraid to open up,” pilgrim Kasia Czajka, 40, said.

“While John Paul II was especially focused on the young, Francis is for all people in need.” The head of the world’s 1.2 billion Roman Catholics cracked joke after joke with youngsters gathered nightly beneath his window, cranking up the party spirit at an event dubbed “the Catholic Woodstock.”

The medieval center of Krakow has been overrun all week by flag-waving groups from China to Samoa and Mexico, who were entertained between masses with concerts, break-dancing, and football matches.

But Friday, July 29, was a day of mourning as Francis walked silently through the notorious wrought-iron “Arbeit Macht Frei” (Work Sets You Free) gate at the Auschwitz-Birkenau camp, where 1.1 million people were murdered.

Freeing himself from the imposing security laid on for his visit, Francis sat on a bench among the trees and bowed his head in prayer before meeting Holocaust survivors and Catholics who had helped save Jews.

“Lord, have mercy on your people. Lord, forgive so much cruelty,” the pope wrote in a memorial book.

In a heartfelt appeal to the world’s young, he said it was up to them to fight xenophobia and “teach us how to live in diversity, in dialogue, to experience multiculturalism not as a threat, but an opportunity.” – Rappler.com