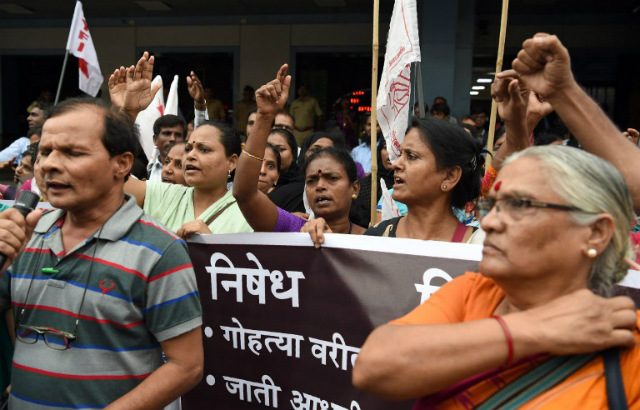 AHMEDABAD, India – Thousands of low-caste Dalits formally known as “untouchables” protested in western India on Sunday, July 31, against an attack on their members by cow protection vigilantes.

Police surrounded the protesters in Ahmedabad, the main city in Prime Minister Narendra Modi’s home state of Gujarat, to prevent any violence, as anger among Dalits mounts over the attack.

Protest organizer Jignesh Mevani said Dalit youths were trying to kill themselves to protest attacks committed against their caste, which lies at the bottom of India’s complex and entrenched social hierarchy system.

“Neither the BJP nor Congress will come to our help,” Mevani said of the ruling Bharatiya Janata Party (BJP) and main opposition party.

“Only our united strength will help us fight the age-old oppression,” the Dalit activist told the crowd which police put at 5,000-strong.

Violent protests erupted this month after video footage emerged of an attack on 4 Dalit villagers who were taking a dead cow to be skinned.

Cows are considered sacred by Hindus and killing them is banned in Gujarat, but the villagers said the animal had died of natural causes.

Dalits are commonly tasked with removing the corpses of dead cows from the streets of India, where the animals often roam freely.

Dalit leaders told the rally a 24-year-old man who had drank poison to protest against the attack died of his injuries in hospital on Sunday.

A senior hospital official in Ahmedabad confirmed the death to Agence France-Presse.

Mevani said such suicides were signs of deep despair among low-caste Indians after years of discrimination and violence by those from higher castes who often went unpunished.

“This is the failure of the Gujarat development model wherein youths have to consume poison to demand their rights,” Mevani said.

The video of the attack showed the four half-naked men tied to a car as the activists took turns to thrash them with belts and batons at a crowded marketplace.

Two more Dalits were beaten up after they tried to save the other 4.

Attacks by vigilante groups on cow traders and smugglers have increased since Hindu nationalist premier Modi won power in 2014. – Rappler.com