Turkey admits some crackdown dismissals may be ‘unfair’ 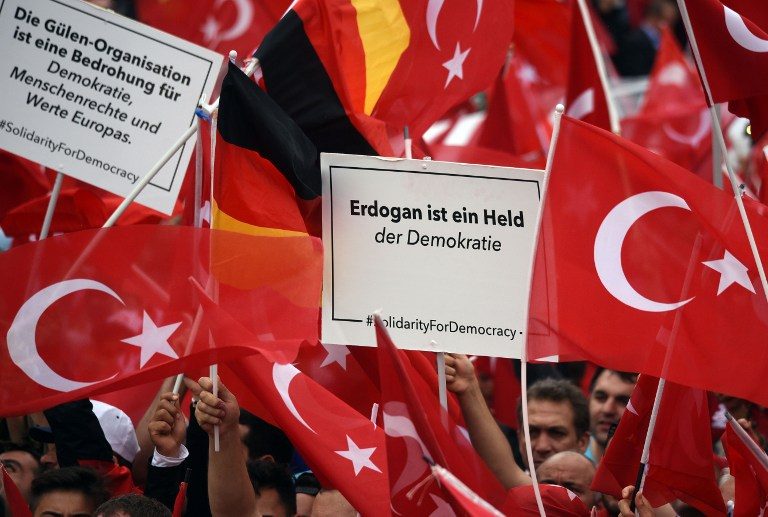 ISTANBUL, Turkey – Turkey admitted on Monday, August 1, there may have been some “unfair” treatment in its post-coup crackdown as it voiced anger at Germany for barring President Recep Tayyip Erdogan from addressing a rally in Cologne.

Prime Minister Binali Yildirim told a top-ranking US general that his government remained committed to principles of law in its fight against coup plotters and called for Washington to extradite US-based preacher Fethullah Gulen “as soon as possible”.

Ankara accuses Gulen of masterminding the coup and says it is seeking to remove all trace of his influence in Turkish institutions.

Retaliating after a failed military attempt to unseat him, Erdogan has launched a purge that has seen tens of thousands of people suspended from their jobs and almost 19,000 detained.

Apparently responding to widening international alarm about the crackdown, Prime Minister Binali Yildirim admitted there may have been some unfair treatment in the state sector.

“There must definitely be some among them who were subjected to unfair procedures,” he said in comments published by state-run Anadolu news agency.

Echoing Yildirim’s tone, deputy prime minister Numan Kurtulmus said: “If there are any mistakes, we will correct them”.

Turkey meanwhile summoned a senior German diplomat, a day after a rally of tens of thousands of Erdogan supporters in Cologne in opposition to the coup.

Hours before the demonstration, Germany’s constitutional court rejected an application to show via video link live speeches from Turkey by politicians including Erdogan, over fears they could work up the crowd.

The decision sparked anger in Turkey, with presidential spokesman Ibrahim Kalin calling the move a “violation of the freedom of expression and the right to free assembly”.

A spokeswoman for the German embassy in Ankara told Agence France-Presse that the charge d’affaires had “been summoned to the Turkish foreign ministry at 1:00 pm (1000 GMT)” on Monday over the rally.

Turkish foreign ministry sources said the envoy was summoned to “strongly express our disappointment” over the ban on a popularly elected leader from addressing the rally and called the German approach “unacceptable.”

But Germany, which is home to the largest portion of Turkey’s diaspora, played down the incident, saying such “invitations” were nothing out of the ordinary.

Ties between Germany and Turkey are already strained over the German parliament’s decision to brand as genocide the World War I-era Armenian massacre by Ottoman forces.

Turkish officials also met in Ankara with the top US military commander in the first direct talks since the failed coup, with Washington under pressure to extradite the Islamic preacher, who has lived in self-imposed exile since 1999 – from his leafy compound in Pennsylvania.

General Joseph Dunford met with Yildirim, as well as Turkish chief of staff Hulusi Akar to “deliver messages condemning in the strongest terms the recent coup attempt and reaffirming the importance of our enduring partnership for regional security,” Dunford’s spokesman Greg Hicks said in a statement.

Yildirim told the US general to extradite “terrorist group leader Fetullah Gulen and members of FETO to our country as soon as possible,” his office said in a statement after the meeting, referring to what Turkey calls the Fethullah Terror Organization (FETO).

“It is important that the United States, our strategic partner and ally, demonstrates a clear and determined approach against the terrorist coup attempt,” Yildirim told the general.

Tensions between the two NATO allies have been aggravated by the foiled putsch, with some Turkish officials even alleging that Washington could have had a hand in the plot. The suggestion has been firmly denied by top US officials.

Last week, Erdogan lashed out at the top US general in the Middle East, General Joseph Votel, after he expressed concerns about the future of military relations between the two allies in the wake of the putsch.

During their meeting, the Turkish premier also told Dunford that the Turkish armed forces were fulfilling its duties “at full capacity” after the reshuffling in the wake of the coup attempt and said that cooperation continued “uninterrupted” with the US and other allies in the fight against terrorist groups including the Islamic State (ISIS) jihadists.

Before his meetings with the Turkish officials, the US general visited Incirlik air base – used by coalition planes for air raids on ISIS in Syria.

Unexpectedly, Dunford also toured the Turkish parliament which was extensively damaged by rebel air strikes on the night of the coup, seen as a symbolic gesture.

Meanwhile Turkey on Monday said it had arrested 11 fugitive soldiers suspected of involvement in an attack on Erdogan’s hotel during the night of the coup.

Erdogan was staying in the western seaside resort of Marmaris on July 15 but dashed to Istanbul just before the hotel came under attack from rebel soldiers determined to oust him from power.