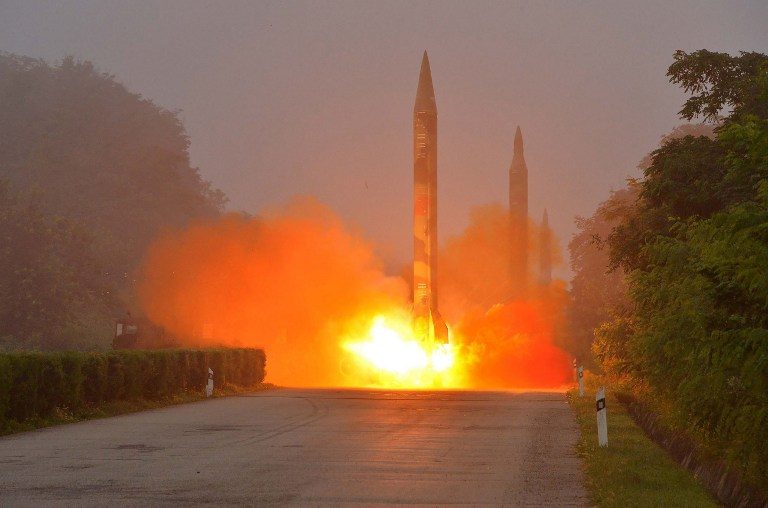 Facebook Twitter Copy URL
Copied
(UPDATED) The United States and its allies press the UN Security Council to condemn North Korea after it test-fired a missile into Japanese-controlled waters for the first time, but they encounter resistance from China

UNITED NATIONS (UPDATED) – The United States and its allies on Wednesday, August 3, pressed the UN Security Council to condemn North Korea after it test-fired a missile into Japanese-controlled waters for the first time, but they encountered resistance from China.

The 15-member council met behind closed doors for emergency talks called by the United States, Japan and South Korea over the ballistic missile launch, the latest provocation from Pyongyang.

US Ambassador Samantha Power called for a “strong, swift response from the Security Council” after the meeting, describing the missile test as “another grave threat to international peace and security.”

“This missile landed incredibly close to Japan,” she told reporters.

“Nothing should be done to exacerbate tension on the Korean Peninsula,” Liu said. “There is a real risk. I think we need to work responsibly.”

The council met in emergency session after North Korea fired two intermediate-range missiles simultaneously, however one appeared to explode on takeoff.

The second missile landed in the Sea of Japan (East Sea), some 155 miles (250 kilometers) off Japan’s northern coast and within its Exclusive Economic Zone (EEZ).

The launches followed a North Korean threat of “physical action” over the planned deployment of a sophisticated US anti-missile system in South Korea, and came just weeks before the start of large-scale joint South Korea-US military exercises.

Power stressed that the US agreement with South Korea to deploy the THAAD missile defense system was “purely defensive” and in response to North Korea’s drive to refine its capabilities.

The United States, Japan and 10 other countries have meantime asked the UN sanctions committee to investigate the July 18 launch of three Scud ballistic missiles and a No Dong intermediate-range missile, according to a letter obtained by Agence France-Presse.

The 10 Security Council members, along with Australia and South Korea, asked the committee to review details of the launch and “take appropriate action,” according to the letter sent last week.

The investigation could identify individuals and companies involved in North Korea’s missile program who could face targeted sanctions including a global visa ban and assets freeze.

China and Russia did not back the request.

Any new sanctions against North Korean individuals or companies would require the approval of all 15 council members.

North Korea has been hit by five sets of UN sanctions since it first tested a nuclear device in 2006.

The Security Council in March adopted its toughest sanctions resolution to date, banning exports of coal, iron and other minerals from North Korea and imposing other restrictions, especially in the banking sector. – Rappler.com