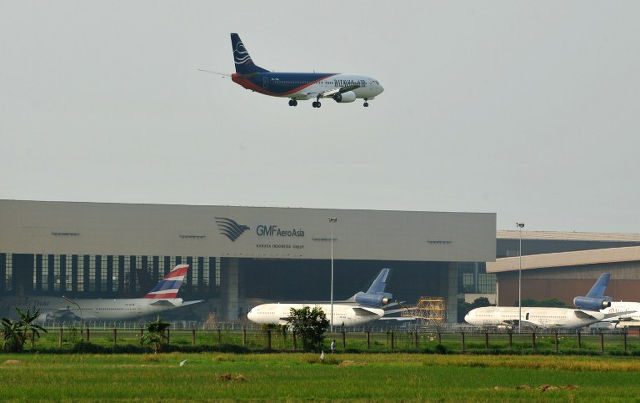 Facebook Twitter Copy URL
Copied
The new Terminal 3 will start off handling only flights operated by Indonesian flag carrier Garuda, and it is hoped it will be fully operational by March of 2017

JAKARTA, Indonesia – The main airport serving the Indonesian capital Jakarta will next week open a new terminal to ease the burden on the country’s busiest aviation hub, the airport operator said Wednesday, August 3.

Air passenger numbers are soaring in Indonesia, the world’s biggest archipelago nation, as a growing middle class increasingly chooses to fly but aging infrastructure is struggling to keep up.

The $380 million terminal at Soekarno-Hatta International Airport, which will start operations at about midnight Monday, will have a capacity of 25 million passengers a year once fully operational, said state-owned airport operator Angkasa Pura II.

The other terminals are currently handling a total of about 60 million passengers a year, way over their capacity.

The new Terminal 3 will start off handling only flights operated by Indonesian flag carrier Garuda, and it is hoped it will be fully operational by March next year.

It will eventually be connected to central Jakarta, about 30 kilometers (18 miles) away, by a rail link. There is currently no rail line between the airport and city centre, leaving passengers facing monster traffic jams to get into Jakarta at busy times.

The terminal’s opening has been delayed for more than a month after the government ordered alterations following the discovery that an important part of the airport was not visible from the air traffic control tower.

As well as ageing infrastructure, the Indonesian aviation sector also faces problems with safety and has suffered a string of deadly crashes in recent years. – Rappler.com