Aleppo one of ‘most devastating urban conflicts’ – Red Cross 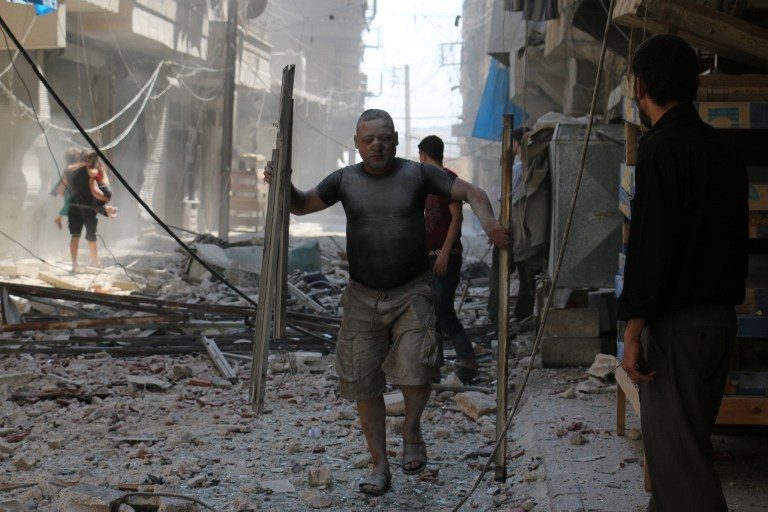 Facebook Twitter Copy URL
Copied
ICRC: 'No one and nowhere is safe. Shell-fire is constant, with houses, schools and hospitals all in the line of fire. People live in a state of fear.'

GENEVA, Switzerland – The battle for Syria’s ravaged second city Aleppo is one of the worst urban conflicts ever fought, the head of the International Committee of the Red Cross said Monday, August 15.

“This is beyond doubt one of the most devastating urban conflicts in modern times,” Peter Maurer said in a statement, decrying the “immense” human suffering.

The divided city of Aleppo has been rocked by escalating violence, with hundreds of people killed, untold numbers injured and tens of thousands trapped without aid, Maurer pointed out.

“No one and nowhere is safe. Shell-fire is constant, with houses, schools and hospitals all in the line of fire. People live in a state of fear,” the ICRC chief said.

“Children have been traumatized. The scale of the suffering is immense,” he added.

Aleppo, Syria’s former economic hub and a focal point of its 5-year civil war, has been divided between a rebel-held east and regime-controlled west since mid-2012.

Fighting for the city has intensified after regime troops seized control of the last supply route into rebel-held areas in mid-July.

The increased fighting has raised concerns for the estimated 1.5 million civilians still in Aleppo, including some 250,000 in rebel-held areas.

The violence has severely damaged the city’s infrastructure, cutting or significantly reducing access to water and electricity across the city, the ICRC stressed.

“Besides the direct threat posed by the fighting, the lack of essential services such as water and electricity, poses an immediate and dramatic risk for up to two million people, who have great difficulty in accessing basic medical care,” Maurer warned.

ICRC said that it and the Syrian Arab Red Crescent had begun trucking drinking water as an emergency measure.

“The human cost of the fighting in Aleppo is simply too high,” Maurer said.

“We urge all parties to stop the destruction and indiscriminate attacks, and stop the killing,” he said.

The ICRC called on all sides to allow aid agencies to reach civilians in all parts of the city, and said regular halts in the fighting was needed to allow in aid and to repair essential services.

The United Nations has also repeatedly insisted that regular 48-hour pauses in the fighting is needed to bring desperately needed aid into Aleppo. – Rappler.com