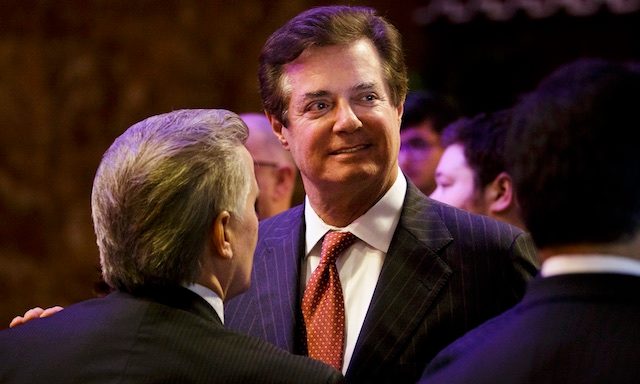 Facebook Twitter Copy URL
Copied
(3rd UPDATE) 'This morning, Paul Manafort offered, and I accepted, his resignation from the campaign,' Donald Trump says in a statement

The resignation of the seasoned Republican strategist Paul Manafort – under fire for his pro-Kremlin ties and role in a Ukrainian corruption scandal – represents the Republican nominee’s latest effort to get back on track after weeks of crisis.

“This morning, Paul Manafort offered, and I accepted, his resignation from the campaign,” Trump said in a statement, thanking him for “his great work” and proclaiming him a “true professional.”

Trump shocked many on Thursday, August 18, by expressing “regret” for past mistakes and began airing his first television ads on Friday in a desperate attempt to chip into Democratic rival Hillary Clinton’s yawning lead in the polls.

The New York billionaire followed up by touring a flood-ravaged region of Louisiana, where officials say more than 86,000 people so far have registered for federal aid and 13 people have died.

Clinton took to Facebook to explain her own absence by saying that while her “heart breaks” for Louisiana, “right now the relief effort can’t afford any distractions.” Local Democratic officials had opposed Trump’s visit, saying it was wrong to divert valuable manpower.

But others in the state have complained that President Barack Obama, currently on holiday in the exclusive New England resort of Martha’s Vineyard, has not visited. He is due to arrive next week.

‘What do you have to lose?’

Trump flew into Michigan later on Friday to address a rally, explaining his appearance in an open-necked shirt and trucker hat by saying he had come straight from “a tour of the suffering and devastation in Louisiana.”

“The spirit of the people is incredible, the devastation likewise,” he said. “Honestly, Obama ought to get off the golf course and get down there,” he added to cheers from the crowd.

He then launched into a sustained pitch for African American voters, who have overwhelmingly flocked to Clinton.

“Look how much African American communities have suffered under Democratic control,” he said. “To those I say the following: what do you have to lose by trying something new like Trump?”

Citing disproportionate levels of poverty, unemployment and failing schools, Trump claimed that “no group in America” has been more harmed than blacks by the former secretary of state’s policies.

He told the overwhelmingly white crowd that he was asking for the vote of “every single African American citizen” in the country.

Whether the Trump campaign can get its wheels permanently back on track remains unclear, however.

His more than year-long, highly controversial campaign has attracted white supremacists, alienated immigrants and done little to win over minorities.

Clinton now leads 47.2% to Trump’s 41.2% among Americans, according to an average of national polls from Real Clear Politics, and is ahead in virtually every swing state.

Manafort had sought to turn the brash-talking 70-year-old candidate, who has never previously held elected office, into a figure more palatable to the general electorate while building up a traditional campaign structure.

But Trump “was not a candidate that could be corralled,” former Republican National Committee chairman Michael Steele said on MSNBC television.

Manafort’s ties to the pro-Kremlin former president of Ukraine, whom he advised for years, had become a serious distraction to the campaign.

The head of Ukraine’s newly formed National Anti-Corruption Bureau, Artem Sytnyk, confirmed this week that more than $12 million had been unofficially earmarked for Manafort from 2007 to 2012, although it remains unclear whether he received any payment.

Manafort denied any wrongdoing, saying he had “never received a single ‘off-the books cash payment,'” or worked for the governments of Ukraine or Russia.

But the Clinton campaign pounced on his resignation in an attempt to fan accusations of nefarious pro-Kremlin influence on Trump, who has spoken admiringly of Russian President Vladimir Putin and even sensationally suggested that Moscow should hack Clinton’s emails.

“You can get rid of Manafort,” campaign manager Robby Mook said, “but that doesn’t end the odd bromance Trump has with Putin.” – Rappler.com