Confessions of a former online bully

Aug 22, 2016 12:11 PM PHT
Ruby Astari
Facebook Twitter Copy URL
Copied
'I am not going to justify what I did or make an excuse about it. I was at my weakest and lowest point, vulnerable and insecure.' 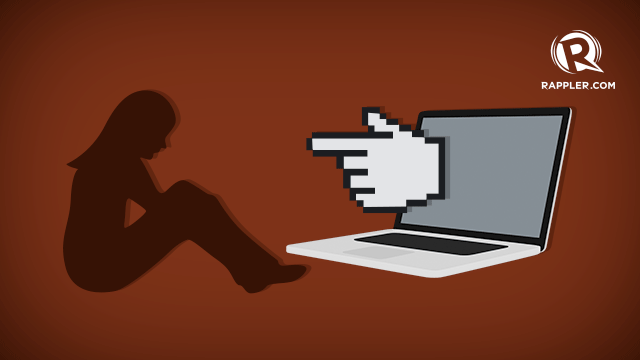 It is not something easy to bring up again, even after about 4 years or so. Looking back, I am not proud of what I did and I still have regrets. I have to admit this, though: I was an online bully.

How did that happen? You may wonder. Or you may scoff, “Who hasn’t been one since the internet era, even for just once in their lives?” Well, even if that’s true, this does not make me feel any better. Looking at how most people have been trolling online these days just brings back those dark memories.

No, I was not bullying anyone famous, even by social media standards. It was an acquaintance.

It started with my friendship with this girl at work. Let’s call her “Celia.” Celia and I started hanging out together after our mutual friend introduced us to each other. We were already in our early 30s, with her being 3 years older than me. She had also been divorced from her first, and abusive husband.

Just like the usual drama, everything went well at first. I had been having some difficulties at home, including the fact that my father was a long-term stroke patient. It was nice to have someone like Celia around. She had been nothing but sweet, understanding and amazingly supportive for someone I had just gotten to know.

We occasionally hung out with the same group of friends. We texted each other. We chatted online, mostly on social media messengers, quite excessively. We grew close and we opened up to one another about our issues: my communication problems with my own family, her insecurity long after her divorce.

Then one day she suddenly came up with this crazy idea to bully another girl on her social media friends’ list. Let’s call her “Naira.”

I should have seen this coming, even before she proposed the idea. First sign? Celia bitched about people she did not like. A lot. That included girls she found prettier, sexier, richer, and more “whatever” (in her own word) than she was.

Celia said those girls had always had problems with her, especially when she became close to the men they happened to like. She did not know why. She had even bitched about one of the girls in our circle of friends constantly, often over petty things. I had felt like I was one of the minor cast on“Mean Girls” and it made me feel uncomfortable.

Why did she want to bug Naira online? Celia said that Naira’s posts were annoying as hell: constantly expressing self-pity after her last boyfriend had dumped her. Celia found her pathetic and disgraceful, because women should be strong and independent, no matter what. Since Celia was divorced after 3 years of marriage, she said she had earned more “rights” to complain about her life.

I am not going to justify what I did or make an excuse about it. I was at my weakest and lowest point, vulnerable and insecure. I had let Celia use me to bully Naira online. Naira, the girl who had never caused me any trouble at all.

At first, I thought it would be fun. Here I am, a chubby girl who has often been bullied and made to feel guilty about her looks, now having a chance to bring a slim, pretty girl down.

For a while, it was intoxicatingly fun. I started commenting on Naira’s every “lame” status with my scathing “don’t be such a cry-baby or a damsel-in-distress” taunts and other “sophisticated” insults that I could come up with. Celia was clearly enjoying every bit of it. We had laughed about Naira a lot.

Until things got way too far and Naira was really hurt. She had even asked me once: “What did I ever do to you?”

It was also the very moment that I started seeing Celia’s true colors and they were not pretty. I know I wished to know how it would have felt to be hurting others like I had been hurt before. It sucked – that’s how it felt.

Not only had I wasted my time, but I was turning into someone I actually despised, thanks to the emotionally manipulative Celia.

My first serious fight with Celia was triggered by our mutual friend “Tobias”. The two of them had an argument and she had flooded my phone with her angry rants about him on every app and social media messengers that we had! I did not say much until I confronted Tobias about this and, boy, was he furious.

He told me that if Celia had had a problem with him, it should have just stayed between them, instead of involving me and causing me all the unnecessary stress and anxiety. Celia was not being fair.

When Celia decided to stop speaking to Tobias and me, I let it slide. Her accusation?

“Don’t bother; I’ve already known whose side you’re on.” She did not even bother waiting for my explanation.

During this time, Naira approached me online. We had a serious talk. I apologized and she forgave me. Surprisingly, she also said that she had known all along that I was not the bullying type. Whatever had happened between her and Celia, I did not (want to) know. That should never have been my business in the first place.

Putting up with Celia and her behavior had been worse than riding on a roller-coaster with your stomach full. I am not going to list all the awful things she had ever said to me, because it is just not worth it.

However, if you happened to know her and asked her about this, believe me when I say that her version would be much different. Anything to save her own skin.

Celia had tried to repair our friendship many times, but she also kept repeating the same old pattern. She still bitched about people she did not like, as if there was no other topic left. She still had this crazy double-standard: she has to know other people’s personal business, but she keeps hers a secret.

When Celia is not happy that people do not do things her way, she lashes out and calls them names. She backbites them online, even with her #nomention statuses. So typical. It has gotten so bad that I had to limit seeing her feeds and her from seeing mine. Enough is enough.

I suppose she has done more damage to our friendship than what I would like to admit, even to myself. I know she is not happy with her own life, but that still does not give her the right to judge others and bring them down. I am afraid that I am still in the process of forgiving her for having turned me into a bully, even for a short while.

We are in charge of what we post on our social media page. However, we are not in control of what others may think of us.

Keep ourselves busy, people. What you see online is endless, just like real life. No need to consume everything. The choice is yours. – Rappler.com

*All names have been changed.

This article was first published on Magdalene.

Ruby Astari  is an English teacher, freelance translator, and freelance writer. Her first novel “Reva’s Tale” is already in stores. She enjoys being a sexy chub, hanging out with fellow writers, and wearing froggy shades in public.