US, Russia move closer to new Syria ceasefire after talks 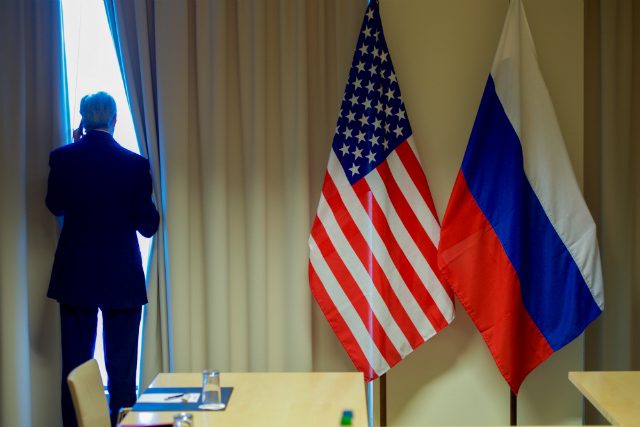 Facebook Twitter Copy URL
Copied
Moscow and Washington support opposite sides in the Syrian conflict, which erupted in March 2011 after President Bashar al-Assad unleashed a brutal crackdown against a pro-democracy revolt

GENEVA, Switzerland – Washington and Moscow made key steps towards agreeing a new ceasefire in Syria, but a final deal has not been reached, US Secretary of State John Kerry and his Russian counterpart said after talks Friday, August 26.

Kerry and Russian Foreign Minister Sergei Lavrov made the comments after the marathon talks at a luxury hotel on the shores of Lake Geneva.

“Today I can say that we achieved clarity on the path forward” for a revamped cessation of hostilities, the top US diplomat said.

He added that the “vast majority” of technical obstacles to a ceasefire had been agreed but that some issues remained unresolved.

Lavrov echoed his American counterpart, telling reporters that “very important steps” had been made on a deal to stop the  violence.

There had been hopes of a definitive announcement to stem the fighting in the war-ravaged country or on a new round of UN-brokered peace talks.

Kerry explained that US and Russian experts would continue to meet in Geneva in the coming days to pour over a set of unresolved issues in hopes of striking a durable deal.

He stressed though that “neither of us is (ready) to make an announcement that is predicated by failure – we don’t want to have a deal for the sake of a deal.”

A previous ceasefire agreed earlier this year has all but collapsed, and Kerry acknowledged that “violations (of the deal) eventually became the norm rather than the exception.”

Moscow and Washington support opposite sides in the Syrian conflict, which erupted in March 2011 after President Bashar al-Assad unleashed a brutal crackdown against a pro-democracy revolt.

Russia is one of Assad’s most important international backers while the US supports Syria’s main opposition alliance and some rebels.

Kerry on Friday listed two main priorities to ensure that a prospective revamped ceasefire holds: responding to ceasefire violations by the Damascus regime and checking the rising influence of the former Al-Nusra Front.

That group has renamed itself Fateh al-Sham Front after renouncing its status as Al-Qaeda’s Syrian affiliate, but Kerry on Friday stressed that “Nusra is Al-Qaeda, and no name change by Nusra hides what Nusra really is and what it tries to do.”

The two diplomats met on and off for nearly 12 hours and were briefly joined by the UN envoy for Syria, Staffan de Mistura, who had said Thursday, August 25, he hoped the talks would help his drive to revive the stalled negotiations.

Successive rounds of negotiations have failed to end a conflict that has killed more than 290,000 people and forced millions from their homes in more than 5 years.

De Mistura had voiced hope of bringing the warring parties back to the negotiating table by the end of August, but that deadline looks sure to slip in the face of intense fighting on the ground.

Both Kerry and Lavrov stressed the need for fresh talks to find a political solution to the crisis.

The US envoy voiced hope that installing a real ceasefire could “open the window of opportunity for us to be able to get to the table here in Geneva, and have a real negotiation about the future.”

The US and Russia co-chair a UN-backed humanitarian taskforce for Syria, which has been struggling to ensure access for desperately-needed aid across the country.

The UN on Friday described the lack of humanitarian access to Syria’s besieged areas as “wholly unacceptable,” saying just one aid convoy had completed deliveries this month.

Syria’s battered second city Aleppo, which is divided between government and opposition control but surrounded by loyalist forces, has emerged as a top concern.

Russia last week gave its blessing to a long-demanded 48-hour pause in fighting in the northern city to allow in aid, but de Mistura on Thursday accused other unspecified parties of still dragging their feet.

There was hope that Friday’s talks between Kerry and Lavrov might help boost those efforts, but no specific pledges on the iconic Aleppo were made. – Rappler.com