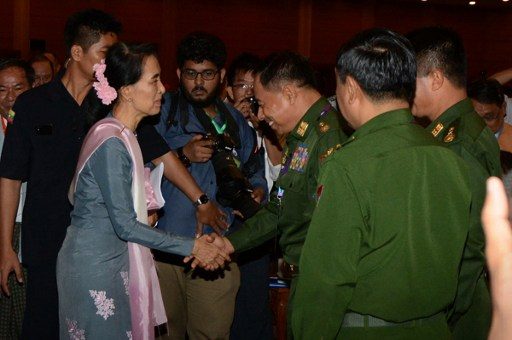 Facebook Twitter Copy URL
Copied
(UPDATED) 'To achieve peace is very difficult... After this, there will be more meetings. And there are many things we have to do during the time in between,' says Aung San Suu Kyi

NAYPYIDAW, Myanmar (UPDATED) – Myanmar’s Aung San Suu Kyi concluded a landmark peace summit with ethnic rebels on Saturday, September 3, calling it the first step on what promises to be a tough road to peace.

The conference in the capital Naypyidaw was Suu Kyi’s first big drive to end insurgencies that have rumbled across Myanmar’s frontier states for nearly 7 decades.

The Nobel laureate, now leading the country after championing a democracy struggle against the former junta, has devoted her first few months in power to kickstarting fresh negotiations between rebel militias and the army.

No resolution emerged from the 4-day summit, which gave representatives from dozens of ethnic groups a chance to air grievances and outline their political aspirations.

Suu Kyi’s biggest achievement was bringing new players to the table, including rebel armies that did not sign a shaky ceasefire brokered by the former military-backed government last year.

However 3 groups still clashing with troops did not attend the talks, and the powerful Wa – a heavily armed militia based in an area bordering China – stormed out on day two over what the government said was a misunderstanding.

“To achieve peace is very difficult,” Suu Kyi told the conference hall filled with delegates on Saturday, the final day of the summit after it was decided a 5th was not needed.

“This is the first meeting. After this, there will be more meetings. And there are many things we have to do during the time in between,” she added.

The veteran democracy activist, who spent some 15 years under house arrest during junta rule, urged all sides to “look forward” as the peace process continues.

Distrust of the military still runs deep in Myanmar – especially in the minority areas battered by decades of fighting and oppression.

Many of the conflicts are complicated by tussles over drug trades and lucrative gem and timber reserves in rebel-held areas.

While Suu Kyi has backed the minorities’ calls for greater autonomy in their homelands, it will be a challenge to craft a federal arrangement that meets each group’s unique demands.

Any changes to a junta-era charter will also require support from the still-influential army, which has the power to veto any proposed amendments.

Although the army has loosened its grip the country since the end of junta rule 2011, soldiers still run key government ministries and a quarter of parliament seats.

Lian Hmung Sahkong, a leader from the Chin National Front who helped organize the peace conference, said the next gathering of delegates will be held in 6 months.

“Our current challenge is to get the signatures of ethnic groups that did not sign the NCA,” he said, referring to the limited ceasefire negotiated last year.

A leader from the Kachin Independence Organization (KIO) – a powerful rebel faction that did not sign the truce – stressed that no concrete agreements were reached at this week’s talks.

“We were able to present our proposals at this conference, but nothing important happened,” General Gun Maw told reporters, adding that more discussion is needed before his group will sign a deal.

Myanmar’s diverse patchwork of ethnic groups make up around a third of the population, but the government and military have long been dominated by members of the majority Bamar ethnicity, to which Suu Kyi belongs.

But the deal collapsed after his assassination and was ignored by the junta that seized power, triggering uprisings that have simmered in the country’s borderlands ever since. – Rappler.com