Oct 20, 2012 9:17 AM PHT
Agence France-Presse
Facebook Twitter Copy URL
Copied
Malala Yousafzai, the Pakistani schoolgirl shot in the head by the Taliban, has stood up with help for the first time but remains seriously ill, doctors treating her at a British hospital say 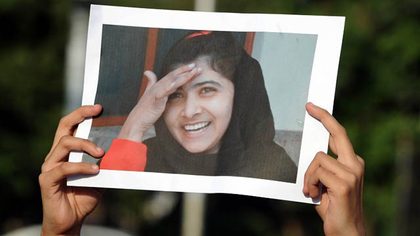 LONDON, United Kingdom – Malala Yousafzai, the Pakistani schoolgirl shot in the head by the Taliban, has stood up with help for the first time but remains seriously ill, doctors treating her at a British hospital said Friday, October 19.

She is unable to talk due to the breathing tube inserted into her windpipe but she can communicate by writing, said Dave Rosser, the medical director at the Queen Elizabeth Hospital in Birmingham, central England.

The teenager escaped certain death by a matter of centimeters (inches), with the bullet grazing the edge of her brain, he revealed.

Though Malala has the potential to make “pretty much a full recovery,” Rosser warned that she is “not out of the woods yet” – her doctors’ chief concern being an infection in the bullet track through her head.

The hospital released a first picture of Malala, in her hospital bed, clutching a teddy bear.

In an attack which outraged the world, she was shot on a school bus in the former Taliban stronghold of Pakistan’s Swat valley on October 9 as a punishment for campaigning for the right of girls to an education.

On Monday she was flown in an air ambulance from Pakistan to Birmingham in a medically-induced coma, and taken to the highly specialized hospital where staff have extensive experience of treating British soldiers seriously wounded in Afghanistan.

“Malala is still showing some signs of infection… in the bullet track which is our key source of concern,” Rosser told reporters outside the hospital.

“It’s clear that she is not out of the woods yet.

“Having said that, she is doing very well. In fact, she was standing with some help for the first time this morning when I went in to see her.”

He explained that Malala’s airway became swollen after the bullet passed through it, so doctors inserted a tracheotomy tube to protect it.

The tube means she cannot speak but there is no reason to believe she would be unable to talk once it is removed, which may happen in the coming days.

She has movement in her arms and legs and is “communicating very freely – she is writing,” Rosser said.

“Malala is keen that I thank people for their support,” he added, after thousands of people left messages for her on the hospital’s website.

With the schoolgirl’s permission, the hospital gave a full breakdown of her injuries, condition and the slow path to her possible recovery.

Rosser explained how the bullet passed through the face of the girl, who the hospital now say is 15 although she has previously been described as 14.

“The bullet grazed the edge of her brain. Certainly if you’re talking a couple of inches more central, then it’s almost certainly an unsurvivable injury,” he said.

Shot at point blank range, the bullet hit her left brow, but instead of penetrating her skull it travelled beneath the skin down the left side of her head.

The shock wave shattered the thinnest bone of her skull and fragments were driven into her brain.

The bullet damaged soft tissues at the base of her jaw and in her neck, which the bullet travelled through before lodging in the tissues above her left shoulder blade.

The bullet was removed in Pakistan soon after the shooting, but specialists have found her left jawbone is injured at its joint, while a bone behind the ear and the base of her skull have been fractured.

Her brain is still swollen, meaning doctors have not been able to do a full brain injury evaluation.

Malala regained consciousness on Tuesday, October 16. She is aware of her surroundings but gets tired very easily.

“She seems to have understood why she is no longer in Pakistan and what has happened to her,” Rosser said.

It was clearly “very difficult” for her to suddenly wake up in a foreign country, he added.

It will take weeks to months for Malala to defeat the infection and recover her strength enough to face surgery.

“Then her skull will need reconstructing either by reinserting the piece of bone that was removed initially or with a titanium plate,” Rosser said.

“Her jaw joint may need further work down the line but that remains to be assessed in a couple of weeks’ time.”

In a separate statement, the hospital stressed that she is “still very ill.”

“This is a fluid situation and she sustained a very, very grave injury,” it said. – Agence France-Presse