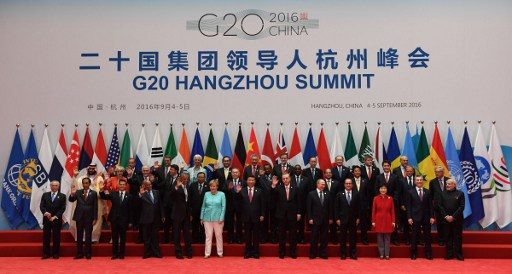 Xi welcomed Group of 20 presidents and prime ministers with a handshake, and an extended clasp with Barack Obama, as both men smiled despite protocol stumbles around the US leader’s visit.

The rise of protectionism is challenging economic globalization, imperiling multilateral trade arrangements, and despite regulatory reforms market volatility is gathering pace, he said.

“We hope the Hangzhou summit will come up with a prescription for the world economy and lead it back to the road of strong, balanced, comprehensive, and sustainable growth.”

The G20 brings together representatives of 85% of the world’s GDP and two-thirds of its population.

But experts fear the gathering will be short on substance, with no acute crisis pushing leaders to defy rising populist sentiment and to take difficult steps such as liberalizing trade.

In a circular conference hall in Hangzhou – the eastern city left deserted by a vast security operation – Xi told leaders the G20 “should work with real action, with no empty talk.”

China is hoping a successful meeting will portray it as an assured and powerful nation ready to assume a role on the international stage that befits its status as the world’s second-largest economy.

Authorities shut thousands of factories to try to clear the skies of smog, and encouraged residents to leave town on free holidays, as well as detaining dozens of dissidents to prevent any hint of unrest.

No deal on Syria

The summit was preceded by a flurry of diplomatic activity on issues ranging from climate change and the war in Syria to international trade.

The US and China on Saturday, September 3, ratified the Paris climate accord, a crucial step towards bringing into force the pact against global warming.

There had been hopes for another breakthrough, on the long war in Syria, after the US said it was close to a deal with Russia on stemming the violence.

But negotiations between Secretary of State John Kerry and his counterpart Sergei Lavrov yielded only an agreement to convene again on Monday, September 5, with Russia accused of “walking back” on key issues.

Moscow and Washington support opposite sides in the conflict, which erupted in March 2011 after President Bashar al-Assad unleashed a brutal crackdown against a pro-democracy revolt.

Successive rounds of international negotiations have failed to end a conflict that has left more than 290,000 people dead and forced millions to flee, a key contributor to migrant flows into Europe.

EU President Donald Tusk said Europe was “close to limits” on its ability to accept new waves of refugees and urged the broader international community to shoulder its share of the burden.

Pictures of a drowned 3-year-old Syrian boy lying on a Greek beach briefly changed the discourse last year, with Germany throwing open its borders, but a major backlash swiftly followed.

Ahead of the summit, Canadian Prime Minister Justin Trudeau warned against “rampant” protectionism and nationalism, saying that “building walls” was not the solution.”

The talks are being held in the wake of Britain’s vote to leave the European Union, which leaves it with the task of renegotiating access to the markets of the rest of the world.

It is a huge job for the world’s 5th-biggest economy, and Australian Prime Minister Malcolm Turnbull said Canberra had “got things moving towards having a free trade agreement with the UK.”

But European Commission chief Jean-Claude Juncker said he opposes such talks while Britain remains part of the EU, insisting they were an “exclusive matter” for the bloc on behalf of its members and “we are sticking to it.”

China craves a polished summit but there were more wrinkles Saturday when a shouting match broke out over access for reporters traveling with Obama as Air Force One arrived on the tarmac.

“This is our country!” a Chinese official, in a dark suit, shouted at a White House staffer. “This is our airport!”

Obama took the fracas in stride on Sunday, saying that although the US insists on press access and does not “leave our values and ideals behind,” the traveling White House juggernaut could be intimidating.

“I think this time… the seams are showing a little more than usual in terms of some of the negotiations and jostling that takes place behind the scenes,” he told a press conference. – Rappler.com