The dispute has raised fears of military confrontation between the world’s superpowers, with China determined to cement control of the strategically vital waters despite a July verdict that its claims have no legal basis.

“The landmark arbitration ruling in July, which is binding, helped to clarify maritime rights in the region,” Obama told Southeast Asian leaders at a summit in Laos.

“I recognize this raises tensions but I also look forward to discussing how we can constructively move forward together to lower tensions and promote diplomacy and stability.”

The verdict by an international tribunal in The Hague said China’s claims to most of the waters – through which $5 trillion in global shipping trade passes annually – had no legal basis.

It also said that a massive burst of artificial island-building activity undertaken by China in recent years in a bid to bolster its claims was illegal.

China angrily vowed to ignore the ruling, describing it as “waste paper”, even though it had legal force through the United Nations Convention on the Law of the Sea.

Obama’s emphasis on the ruling being legally “binding” attracted an immediate reaction from China, which has argued the United States has no role to play in the dispute.

“We hope the US can take an objective and just attitude with respect to South China Sea issues,” Chinese foreign ministry spokeswoman Hua Chunying said in Beijing.

Other claimants in the sea are the Philippines, Vietnam, Malaysia, and Brunei – all part of the 10-member Association of Southeast Asian Nations (ASEAN) bloc meeting in Laos – plus Taiwan.

Chinese Premier Li Keqiang is also in Laos this week, with ASEAN hosting a series of regional meetings, and gathered with Obama later Thursday at an 18-nation East Asia summit.

ASEAN leaders released a statement on Wednesday, September 7, saying they were “seriously concerned” over recent developments in the sea.

But intensive Chinese lobbying helped to ensure there was no mention of the July ruling in the ASEAN statement.

The East Asia statement to be released later Thursday was also going to give a muted response, according to a draft obtained by AFP.

ASEAN works by consensus, and China has successfully pressured Cambodia and Laos in recent years to ensure the bloc does not gang together to heavily pressure Beijing.

However the Philippines released photos on Wednesday it said showed renewed Chinese island-building activity, in a deliberate move to throw the issue into the spotlight.

The Chinese ships were at Scarborough Shoal, a small fishing ground within the Philippines’ exclusive economic zone that China took control of in 2012.

If China did build an island at the shoal, it could lead to a military outpost just 230 kilometers (140 miles) from the main Philippine island, where US forces are stationed.

It would also be a major step in China’s quest to control the sea, giving it the ability to enforce an air defense identification zone across the waters.

Obama warned Chinese President Xi Jinping in March not to build at the shoal. 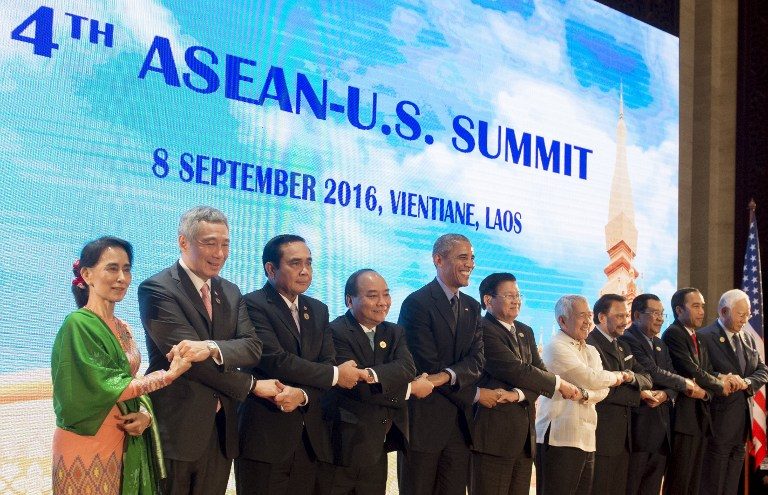 Chinese island-building in the Spratlys archipelago – another strategically important location – has already triggered various US military shows of strength.

China insisted repeatedly this week it was not undertaking any island-building activities at the shoal, and on Thursday repeated its rejection of the tribunal ruling.

A barrage of other security threats were also in focus in Laos on Thursday, including North Korea’s nuclear ambitions following its latest missile tests.

Obama warned on Monday, September 5, that Kim Jong-Un’s regime was dooming itself to further isolation, and the UN Security Council condemned the tests.

A spectacular sideshow in Laos this week has been a spat between Obama and the acid-tongued Philippine President Rodrigo Duterte, whose nations are longtime allies.

Duterte launched a tirade against Obama on Monday after being told the US president planned to raise concerns about a war on crime in the Philippines that has claimed 3,000 lives in just over two months.

“Son of a whore, I will curse you in that forum,” Duterte told reporters.

Obama cancelled a meeting with Duterte scheduled for Tuesday, September 6, because of the outburst, and on Thursday urged the Philippine president to do his crime war “the right way.” – Rappler.com