Sep 9, 2016 10:01 PM PHT
Natashya Gutierrez
Facebook Twitter Copy URL
Copied
Philippine President Rodrigo Duterte says Indonesia and the Philippines have decided to end the problem kidnappings 'once and for all' 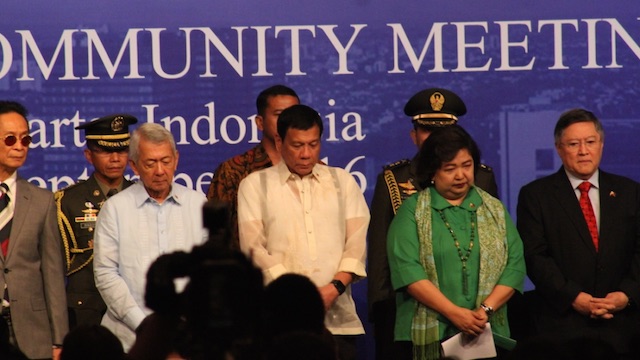 JAKARTA, Indonesia – After a spate of kidnappings at sea by the Abu Sayyaf, Philippine President Rodrigo Duterte made it clear that he was in Indonesia with the goal of speaking to Indonesian President Joko “Jokowi” Widodo about the problem.

“I’m here to get an agreement with him because there is so much piracy in the seas, in the high seas between Malaysia, Philippines, and Indonesia,” Duterte said on Friday, September 9, as he addressed the Filipino community.

“Maybe I will have…even just a memorandum or a note verbale, where we can agree that hot pursuit – those pirates that are being chased out of the territorial waters of Indonesia and in the high seas and towards the jurisdictional waters of the Philippines – they can, they have the right to go in,” he said.

Duterte said that under the rule in international waters, any nation can arrest pirates since piracy is a crime against humanity. Duterte, however, said he wants something harsher to discourage the bandits.

“But this time, we make it clear that if the chase began in Indonesia here, then crosses, the chase continues in the international waters. And if they are really fast enough also, inside now the Philippine waters, they can go ahead and blast them off. That’s the agreement. Pasabugin mo na (Blow them up). That’s what I… that’s one of my words actually to…President Widodo.”

“And I said, blow them up. If there’s a hostage, usually it is the sailors, then I will just have to, maybe come in, and arrest them, and execute them,” he said.

At least 25 Indonesian sailors and a handful of Malaysians have been abducted this year travelling in the Sulu Sea between Indonesia, Malaysia, and the Philippines.

Philippine Islamist extremist outfit Abu Sayyaf, notorious for carrying out kidnappings for ransom, has been blamed for the abductions.

Those abducted are typically taken to Abu Sayyaf strongholds in the southern Philippines. Most have been released, with authorities refusing to confirm whether ransoms were paid or not, although a handful of Indonesians are still being held.

Duterte made the comments hours before he met with Jokowi in the state palace.

After their meeting later in the afternoon, he announced in a joint statement that the two countries “agreed to step up joint measures to address the issue of piracy and lawlessness in the waters in our region.”

Speaking to media afterwards, Duterte said the agreement means “that there will be some interdiction by their Armed Forces and the Armed Forces of the Philippines and that is not really a warning but just a statement that we have decided to end this problem once and for all.”

He said that unlike their previous agreement, this time Duterte allows other countries to chase ships and pursue them even when they are in Philippine waters – “until such time that there is a competent Philippine authority who will take over in the chase.”

“Maybe what’s in my mind really is the hot pursuit and if the hot pursuit is done in the high seas, in the international waters, they can and they can even arrest or destroy them if they present a violent resistance,” he said.

“But entering the Philippine waters, we have agreed really also to just coordinate and if there is a pursuit, in the meantime, they can radio or call our forces nearby to take over because we are entering your jurisdiction.”

The Philippine president said Malaysia will also be involved in the cooperation.

In May, Indonesia, Malaysia, and the Philippines agreed to launch coordinated patrols of the waters, although the countries are still working out the details.  – Rappler.com/with reports from Agence France-Presse