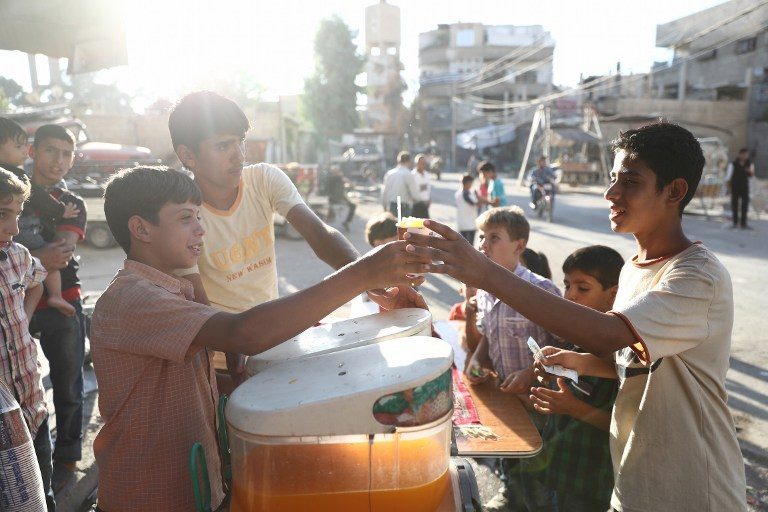 ALEPPO, Syria – UN chief Ban Ki-moon on Wednesday, September 14, pressed Russia and the United States to do more to ensure the delivery of much-needed aid to Syrians as a ceasefire was largely holding.

Russia said the Castello Road – the key supply route into Aleppo – had come under mortar fire, threatening the withdrawal of Syrian troops which had been set to begin at 0600 GMT on Thursday, September 15.

The truce that began at sundown on Monday, September 12, agreed after marathon US-Russia talks in Geneva last week, is part of the latest bid to end a five-year conflict that has killed more than 300,000 people.

Ban said he was in talks with Russia and the United States to turn up the pressure on all sides to guarantee the security of the UN aid convoy.

“It’s crucially important (that) the necessary security arrangements should be given so that they can be allowed to cross the lines,” said the UN secretary general.

Aleppo is in desperate need of humanitarian aid after weeks of heavy fighting. The eastern neighborhoods, where some 250,000 people live, have been under government siege for most of the past two months.

The convoy of aid was supposed to head towards the city on Wednesday, but Ban said the security arrangements were still not in place despite the truce.

“They are at the border with Syria. They are still there,” he said.

Staffan de Mistura, the UN’s Syria envoy, has hailed the truce for bringing about “a significant drop in violence” despite isolated violence.

The Syrian Observatory for Human Rights, a Britain-based monitor of the war, said it had recorded no deaths in the country since the ceasefire took effect.

Residents in Aleppo have welcomed the lull in the conflict that has displaced more than half of the population of their country and destroyed their city, a former economic powerhouse.

But they expressed frustration about the delay in promised aid.

“The truce is good, but it’s not enough. We want food to come in,” said Abu Jamil, a resident of the rebel-held east.

“The situation is still bad as the markets are empty,” said the 55-year-old.

The deal calls for the truce to be renewed every 48 hours, and for Washington and Moscow to begin unprecedented joint targeting of jihadists like ISIS and former Al-Qaeda affiliate Fateh al-Sham Front if the ceasefire lasts a week.

Only hours before the expiry of the first 48-hour period, Russia appealed for it to be extended.

Moscow “calls for the extension of the cessation of hostilities on all Syrian territory for 48 hours,” senior Russian military officer Viktor Poznikhir said, quoted by news agencies.

Initially, the deal allows the Syrian air force to continue strikes in areas where ISIS and Fateh al-Sham, previously known as Al-Nusra Front, are present.

Once the joint Russian-US targeting begins, however, government warplanes “will no longer be able to fly in any areas of Syria where there is opposition or Al-Nusra Front presence,” a senior US administration official said.

Russia said it had targeted jihadists in Palmyra on Tuesday, in the first such strikes during the truce.

The Observatory reported minor violations by both sides, but no casualties.

“If things continue on this path it will be a positive development in protecting Syrian civilians from killing, fighting and displacement.”

But there remains deep skepticism about whether the truce will hold, with the opposition yet to officially sign on.

A crucial part of the deal calls on non-jihadist rebels to break ranks with Fateh al-Sham ahead of joint US-Russian operations against the group.

But many Islamist rebel groups cooperate closely with Fateh al-Sham, and the biggest of them – the powerful Ahrar al-Sham group – has criticized the terms of the Russian-US deal.

If the deal does hold, it could open the door to new peace talks to resolve the conflict, with Russia saying De Mistura could invite government and opposition representatives to new talks “at the very beginning of October”. – Rappler.com