Sep 21, 2016 3:37 PM PHT
Natashya Gutierrez
Facebook Twitter Copy URL
Copied
EXCLUSIVE: Despite the denial of the Philippine and Indonesian governments that ransom was paid, millions of dollars were given to the Abu Sayyaf Group for the release of Indonesian hostages over the past few months 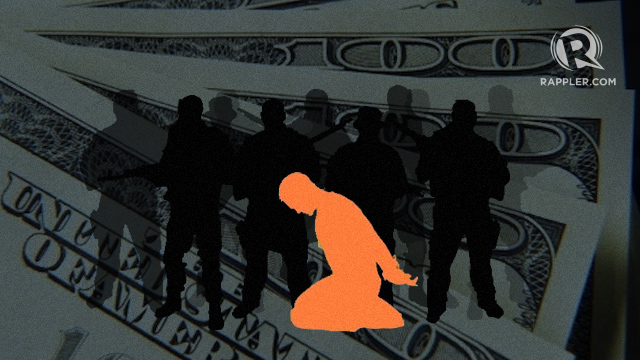 JAKARTA, Indonesia – At early dawn on Sunday, September 18, 3 Indonesian sailors were escorted to the shoreline of the southern Philippine province of Sulu and were released by Muslim rebels after over two months in captivity.

Their release came just two days after Norwegian hostage, Kjartan Sekkingstad, was freed. Sekkingstad was also held by the Abu Sayyaf Group (ASG) in Sulu for a year, after being kidnapped in a Samal resort off Davao City in September 2015.

No ransom payment was mentioned.

A week before he took his oath as president on June 30, 2016, Duterte met with the Norwegian ambassador to Manila and vowed to help in negotiations for the release of Sekkingstad.

The same source said P20 million was paid for the release of the 3 Indonesians, “but the official line or scenario is that the rescue was made by the MNLF.”

But what’s more shocking is the total earnings from ransom payments of the ASG in 2016 alone.

Calculations made by Rappler, based on the documents and the most recent ransom amount paid for the release of the Norwegian and the 3 Indonesians, show that the Abu Sayyaf earned a whopping P354.1 million or $7.4 million (Rp 97.5 billion) minimum just this year.

Of that amount, at least P324.1 million or $6.7 million (Rp 89.1 billion) was earned from ransom payments for Southeast Asian seafarers. 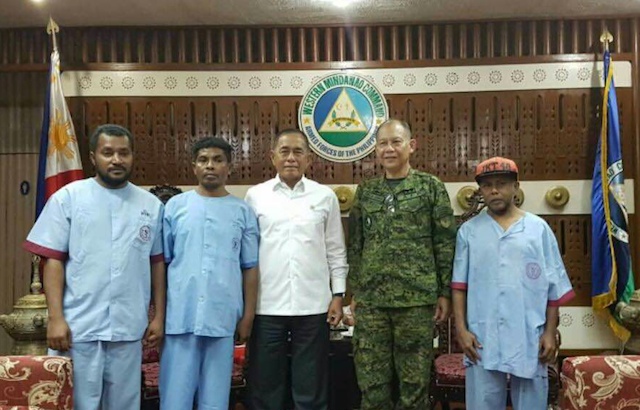 The Abu Sayyaf is a loose network of bandits and militants formed in the 1990s with seed money from Osama bin Laden’s Al-Qaeda network.

It is based in remote Muslim populated southern islands of the mainly Catholic Philippines such as Sulu and Basilan, and has earned millions of dollars from kidnap-for-ransom activities, often targeting foreigners.

While its leaders have in recent years pledged allegiance to the Islamic State (ISIS) group, analysts say the group is mainly focused on a lucrative kidnapping business rather than religious ideology.

The group, which is blamed for the worst terror attacks in Philippine history and listed by the United States as a terrorist organization, has been the target of a military operation since August.

In the last few months, the ASG has been responsible for a spate of kidnappings in the Sulu Sea – including that of at least 24 Indonesians.

Since then, 17 Indonesians have been released – including the 3 freed last week – 2 others escaped, while 5, who were kidnapped in June, remain in captivity. (The Philippine government has been quoted as saying 6 more are in captivity although it is unclear where the extra headcount is from.)

Documents show that all 17 who were released were freed only after paying ransom.

According to an intelligence report which narrated the abduction of the 10 Indonesian sailors in Tawi-Tawi from Brahma 12 Tugboat in March, Joel Mirasol, Operations Manager of the World Mariner Philippines, received a call from the ship owner of Brahma 12 tugboat and was told that the vessel was attacked by armed men who took 10 Indonesians. 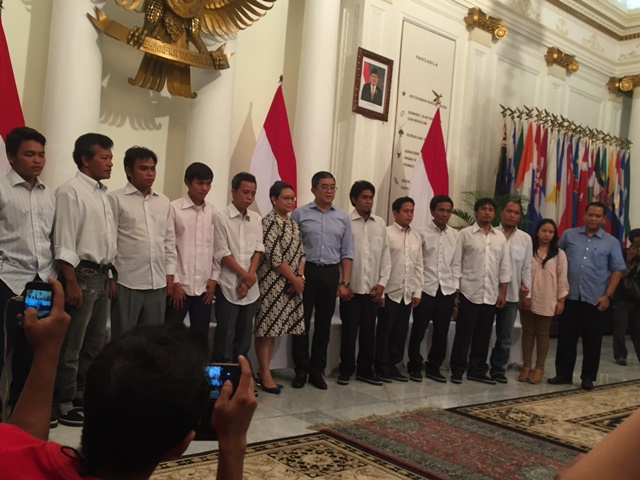 During the conversation, the kidnappers demanded P50 million from the owner as ransom.

Another classified document chronicled the April abduction of 4 other Indonesian sailors, from Tugboat Henry, wherein it said kidnappings would not cease due to the huge ransom payments received by the Abu Sayyaf.

The 10 crewmen of Brahma 12 were eventually released on May 1 this year, while the 4 from tugboat Henry were freed on May 11.

A subsequent document, which chronicled paid ransoms to the ASG from 2015 to the first quarter of 2016, said the Indonesians were released after hefty payments.

The report said P50 million or $1 million (Rp 13 billion) was paid for the release of the 10 crewmen of Brahma 12, while another P50 million was paid to free the 4 from tugboat Henry. But it was a later intelligence document that highlighted the lucrativeness of the ASG’s kidnap-for-ransom business.

That amount, however, has yet to include the recent P30 million paid to the ASG for the Norwegian, and the P20 million for the 3 Indonesians.

The intelligence documents did not say who exactly paid the ransom for Indonesians, although reports point to the companies which employed the sailors, while other documents show the company owners or families are the first ones called by the kidnappers when asking for ransom.

While the governments have insisted no ransom was involved, some officials have started to admit that ransom could have been paid by other parties.

On Monday, September 19, Minister Ryacudu denied the Indonesian government paid ransom for the 3 hostages, but said he did not know if their families or employers did.

A similar sentiment was echoed by Philippines Communications Secretary Martin Andanar, who said, “I would like to reiterate that the government maintains the no-ransom policy. Now, if a third party or the family gives ransom, we do not know.”

MNLF got ransom too

Meanwhile, both the Philippine and Indonesian governments have publicly praised the MNLF for their assistance – but documents show the MNLF also received ransom payment. 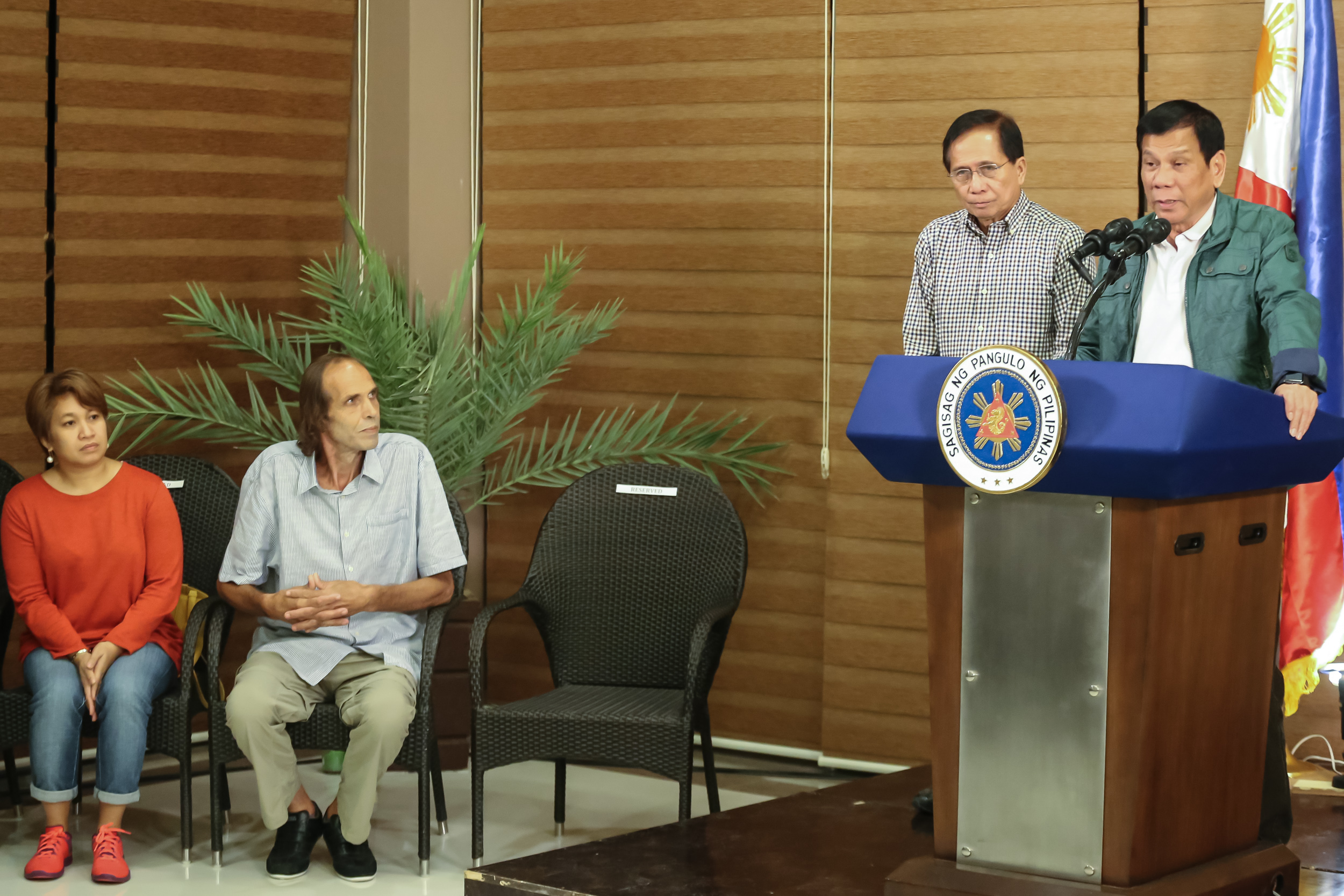 Aside from the intelligence source who said the MNLF received P20 million for assisting with the Norwegian’s release, another confidential report stated that the MNLF was sharing finances with the ASG, which helped fund its weapons and ammunitions.

It also warned of another possible “large scale attack” like the 2013 Zamboanga siege from the MNLF.

The MNLF also helped broker the release of the 14 Indonesians in May.

The involvement of the MNLF comes as Duterte seeks to revive peace talks with the group. Duterte had earlier said that he was planning to talk to Misuari as part of efforts to forge peace among warring groups in the country, but clarified last week that he would wait until 2017 since Misuari does not appear ready to negotiate at the moment.

Misuari, the 77-year-old MNLF leader, has a standing warrant of arrest for rebellion and violation of international humanitarian law in relation to the 2013 Zamboanga  City siege which killed over 200 people and displaced thousands of others, many of whom still live in evacuation centers in the city.

Duterte has given Misuari assurances he would not be arrested or detained.

Misuari and the MNLF had already signed a peace agreement with the Ramos government; he was elected governor of the Autonomous Region in Muslim Mindanao as a result. The MNLF was also provided government posts and millions in livelihood projects under that deal.

Rogue MNLF members, however, have been involved in kidnapping in the past several years, sometimes jointly with the ASG.

Duterte has sworn to eliminate the Abu Sayyaf, ordering the military to “destroy” the group in August after it beheaded a second Canadian hostage. The military has deployed more than 8,000 troops to Sulu, losing 15 of its men in a single battle last August.

An intelligence document, which assessed the Abu Sayyaf situation a few months ago, rings true.

The document said that ransom payment heightened the kidnapping for ransom of the Abu Sayyaf group.

It noted that the group’s strategy has changed, evolving from abduction across Zamboanga to piracy and kidnapping at sea of boats in international waters, and warned that the kidnappings would not stop, seeing that there was great dependence on ransom payments.

The report added that publicized beheadings appeared to be successful in convincing parties to pay ransom. – Rappler.com