Pressure is on Clinton, Trump in first debate 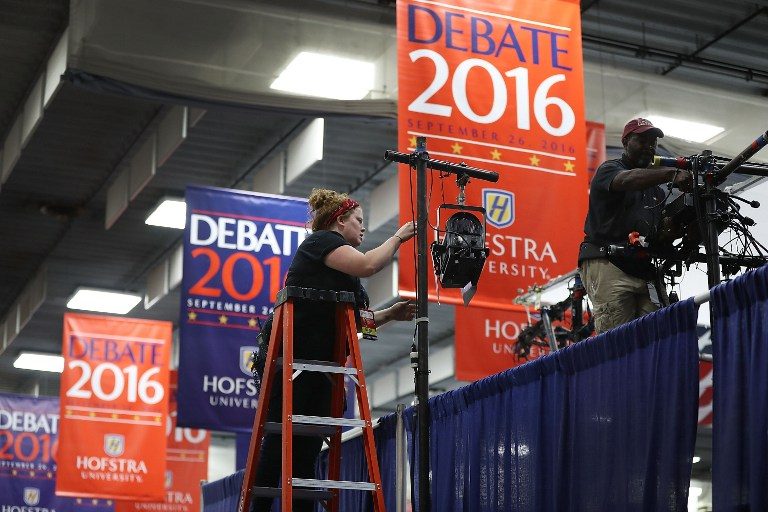 WASHINGTON DC, USA (UPDATED) – Pressure mounted on Democrat Hillary Clinton and Republican Donald Trump Sunday, September 25, as they head into their first presidential debate with a new poll showing them in a dead heat.

Mind games were on display as Trump threatened to invite Gennifer Flowers, a former lover of Bill Clinton, to watch Monday’s high-stakes battle of wits from a front-row seat.

Trump campaign manager Kellyanne Conway said it was meant to show the New York billionaire had ways “to get inside the head of Hillary Clinton” but she told CNN there were no plans to invite Flowers.

“It’s a warning sign before the debate has even started about Donald Trump’s lack of fitness, his bullying tactics that make him unfit to be president,” said Clinton’s campaign manager, Robbie Mook, on CNN.

As many as 90 million people are expected to tune in when Trump and Clinton face off at Hofstra University in New York just 6 weeks before the November 8 election.

Many analysts say debates usually don’t win a candidate the election but can well lose it for them. A single sentence, or the slightest slip, can do serious damage.

Clinton, 68, enters the fray with no cushion. A Washington Post-ABC News poll published Sunday found that her slim advantage from last month has now evaporated.

She is tied with Trump at 41% among registered voters, with Libertarian candidate Gary Johnson at 7% and Green Party candidate Jill Stein at 2%, according to the poll.

In a two-way match-up, Trump and Clinton were even at 46% of registered voters. The survey showed a statistical tie among likely voters as well.

“I think this thing will be close right up until the end,” said Clinton running mate Tim Kaine. “We have to make our case every day. The debates are a great way to do that.”

Plenty of American voters will have made a decision by now, to be sure. Most have.

But 9% by some estimates still don’t know who to vote for, after a long campaign in which bitter attacks have often replaced substance.

And this year has been like none in the past, with Trump, 70, using social media around the clock in combative fashion, while often making mistakes, misstatements, and blunders without troubling his base.

On Saturday, September 24, the New York Times endorsed Clinton, who ahead of the debates has been cloistered with aides and her papers at home in Chappaqua, north of New York, even practicing with relatives playing Trump.

She has been focusing on his psychological profile, with a goal to get Trump to crack, to show that he can’t control himself and lacks the even-handed temperament a president needs.

If he reacts by attacking, Trump also risks losing women’s votes; he already has a harder time with women voters, and they make up 53% of those who turn out. And any slip is sure to be a TV news sound bite.

Clinton’s campaign released a long list of lies it attributes to Donald Trump ahead of the debate.

Trump took Friday to prepare, and still had to work Sunday, September 25, on the debate. But he continues with campaign rallies on other days, including Saturday night in Roanoke, Virginia.

Trump seems unwilling to train with a Hillary stand-in. But he has watched videos of his opponent in previous debates.

Clinton, making her second presidential bid, is an old hand at debates and considered solid. In some ways, she may have more to lose.

After almost 40 years of public service, she is very well versed on the issues, and 88% of Americans believe she is smart.

But in the latest poll 66% say they do not find her honest. And 57% have a negative opinion of a woman they see as cerebral, distant, or cold. Trump’s negative numbers were virtually identical.

Her image has been sullied by Trump attacks over her email scandal, the Clinton Foundation’s alleged pay-to-play donations, and her ties to Wall Street.

“Be yourself and explain what motivates you,” President Barack Obama suggested to his former secretary of state, who as president would carry on the legacy of his two administrations.

Running mate Tim Kaine has said of Clinton: “When the spotlights are at the brightest and the pressure is the most intense, that’s when she brings her A-plus game.”

Trump has not yet experienced a presidential debate: 90 minutes of intense questioning, with only one opponent and a moderator, who on Monday will be NBC news anchor Lester Holt.

But that does not worry the former reality TV star. He is good on his feet, and unpredictable, more comfortable in the limelight than on issues. He has promised to be “very respectful” with Clinton. – Rappler.com