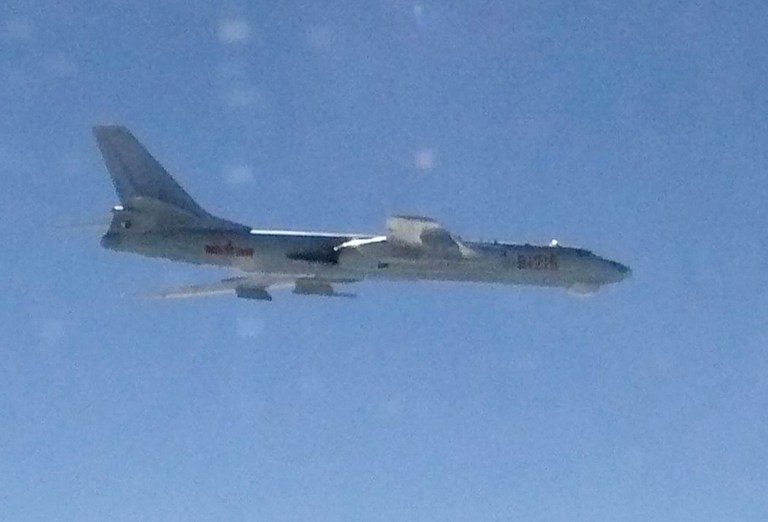 BEIJING, China (UPDATED) – China has sent fighter planes for the first time over a strait near Japan, the two governments said Monday, September 26, after Tokyo announced it may patrol alongside the US in the disputed South China Sea.

More than 40 Chinese military aircraft on Sunday, September 25, traversed the Miyako Strait between Japan’s Miyako and Okinawa Islands, to carry out training in the West Pacific, according to a statement on China’s defense ministry website.

The Sukhoi Su-30 fighters, bombers and refuelling aircraft did not violate Japanese airspace.

Japan’s defense ministry said it was the first time Chinese fighters had passed over the strait.

The move comes after Japanese Defence Minister Tomomi Inada said earlier this month that Tokyo would increase its engagement in the South China Sea through joint training cruises with the US Navy, exercises with regional navies and capacity-building assistance to coastal nations.

Beijing asserts sovereignty over almost all of the South China Sea, dismissing rival partial claims from its Southeast Asian neighbours. It rejects any intervention by Japan in the waterway.

In recent months Japanese Prime Minister Shinzo Abe has criticised China for rejecting a July ruling by an international tribunal, which said Beijing’s extensive claims to the waters had no legal basis.

Tokyo, a key US ally, is also strengthening defence ties with other countries in the disputed region. Japan and China are already at loggerheads over a longstanding territorial row in the East China Sea.

That dispute relates to uninhabited islets controlled by Japan known as the Senkakus in Japanese and the Diaoyus in Chinese.

Abe said on Monday Japan would “never tolerate attempts to unilaterally change the status quo” in the disputed waters, or “wherever else in the world”, in an apparent response to the Chinese move.

“We pledge to protect Japan’s territory, and in the sea and air,” he said in a speech to open a new parliamentary session.

Japan and China “share a mutual understanding that we’re significantly responsible for regional peace and prosperity”, he added.

In its statement the Chinese defence ministry said it had also mobilised an unspecified number of bombers and fighters to patrol the East China Sea Air Defence Identification Zone (ADIZ).

Beijing sparked alarm after it unilaterally established the ADIZ in 2013. It demanded all aircraft submit flight plans when traversing the zone, which covers the islands disputed with Tokyo and also claimed by Taipei.

“Normalizing far sea drills out in the West Pacific and patrols in the East China Sea ADIZ is based on the need for China’s Air Force to protect national sovereignty and security and ensure peaceful development,” air force spokesperson Shen Jinke said in the statement.

The Chinese military has been monitoring and identifying foreign military planes that entered the ADIZ and “took measures according to different air threats” since it was set up three years ago, the statement added. – Rappler.com