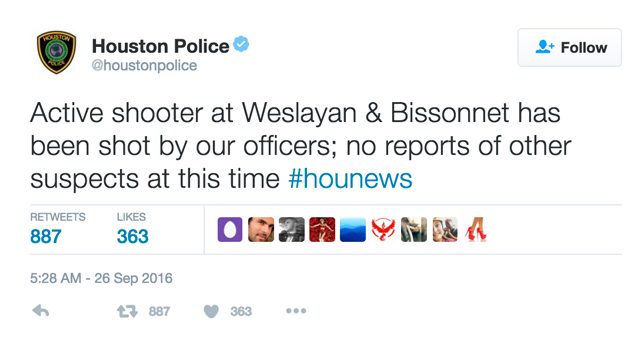 WASHINGTON, DC, USA (UPDATED) – Six people were injured when a gunman opened fire in Houston, Texas on Monday, September 26, just before daybreak, before police shot and killed him, police and firefighters said.

Houston Fire Department spokesman Richard Mann said the injuries were of varying gravity with some people suffering gunshot wounds and others cut by broken glass.

Police shot the shooter and there were no reports of other suspects, the Houston police department said on its Twitter account.

Active shooter at Weslayan & Bissonnet has been shot by our officers; no reports of other suspects at this time #hounews

Police said they were checking the shooter’s vehicle for explosives. Local media reported the car was a black convertible sports car.

Witnesses said the shooter started firing at about 6:30 a.m. (1130 GMT) onto moving cars from an area near an apartment complex, media reports said.

“The shots were coming almost non-stop. Four, five, six at a time,” said Jaime Zamora, a cameraman for Houston television station KTRK who witnessed some of the shooting. He estimated that between 30 and 50 shots were fired.

Emergency responders set up a staging area to help victims at a nearby strip mall.

Officials asked residents in the area to “shelter in place.” – Rappler.com