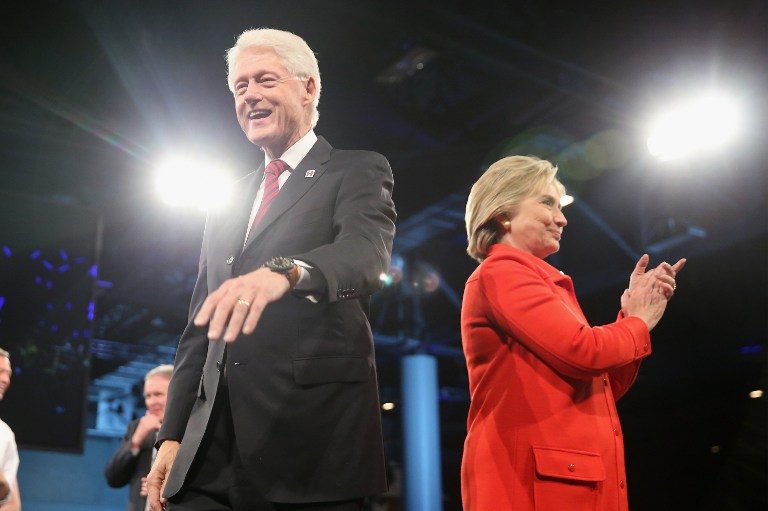 WASHINGTON DC, USA – Donald Trump indicated in a new interview that he’s ready to drag ex-president Bill Clinton’s sex scandals into the White House campaign, after Democrats lashed out at the billionaire’s Twitter rant against a pro-Hillary ex-Miss Universe.

Trump told The New York Times that he believes talking about the sex scandals that stained the career of Hillary’s husband Bill would turn female voters away from her.

“She’s nasty, but I can be nastier than she ever can be,” Trump told the Times in an interview posted late Friday, September 30.

He added: “Hillary Clinton was married to the single greatest abuser of women in the history of politics,” referring to Bill Clinton (president 1993-2001).

“Hillary was an enabler, and she attacked the women who Bill Clinton mistreated afterward. I think it’s a serious problem for them, and it’s something that I’m considering talking about more in the near future,” he told the newspaper.

In an apparent effort to pre-empt the attacks, the Clinton campaign released audio of Bill Clinton talking about his marriage with Hillary.

“I think that she has literally spent a lifetime dealing with not only her joys and her blessings, but also heartbreaks and disappointment, and sometimes unfair treatment,” a reflective Bill says.

The Venezuela-born Machado claims the billionaire bullied her mercilessly after winning the Trump-owned Miss Universe beauty pageant in 1996.

“Did Crooked Hillary help disgusting (check out sex tape and past) Alicia M become a U.S. citizen so she could use her in the debate?” said Trump, in one of a series of virulent tweets.

According to the fact-checking website Snopes, Trump’s sex tape allegation apparently refers to Machado’s appearance on a reality TV show in which she is shown in bed, under covers, with another participant.

Machado also appeared in Playboy magazine. But a pornographic video circulated in recent years purporting to star the former Miss Universe was debunked as a fake.

Clinton, who mentioned Machado in the Monday debate, has blasted Trump’s history of abusive remarks that included humiliating the ex-beauty queen over her weight gain and Latina origins, nicknaming her “Miss Piggy” and “Miss Housekeeping.”

“Who gets up at the at three in the morning to engage in a Twitter attack against a former Miss Universe?” Clinton asked supporters in Florida on Friday.

“His latest Twitter meltdown is unhinged, even for him,” she said.

Trump was unapologetic. “For those few people knocking me for tweeting at three o’clock in the morning, at least you know I will be there, awake, to answer the call!” he wrote.

In the clip Trump opens the door of a limousine as the models emerge. He then pops a bottle of champagne, and a splash of fizzy liquid lands on the Playboy bunny logo.

The Clinton campaign pounced on the story.

“There’s been a lot of talk about sex tapes today and in a strange turn of events, only one adult film has showed up today and it’s star is Donald J. Trump,” wrote Clinton campaign spokesman Nick Merrill.

Clinton up in latest poll

Clinton pulled ahead of Trump by three percentage points in a Fox News national poll out Friday, besting the billionaire 43% to 40%.

Although Clinton’s lead is within the poll’s margin of error, it shows a bump for Clinton, who beat Trump by only one percentage point in the same poll two weeks ago.

The nationwide results come as Clinton’s numbers improve in a number of critical swing states following the debate.

Florida – with its prodigious number of electoral votes – has swung back toward Clinton since Monday’s debate, polling shows.

Also out late Friday was a video deposition from June in which Trump acknowledged that he lost business after disparaging Mexicans at the start of his campaign.

Trump appears answering questions relating to a lawsuit involving celebrity chefs Jeffrey Zakarian and Jose Andres, who pulled out of a deal to work at the real estate magnate’s new Washington DC hotel because of the candidate’s comments.

The Macy’s department store and the Spanish-language Univision network cut ties with Trump after his tirade.

Trump acknowledged that “a few bad days of press” came after his statement, and a loss of some business.

“I don’t know how I can quantify it, but I think we were hurt,” he said.

The video was released at the request of several media outlets despite opposition from the Trump campaign. – Rappler.com