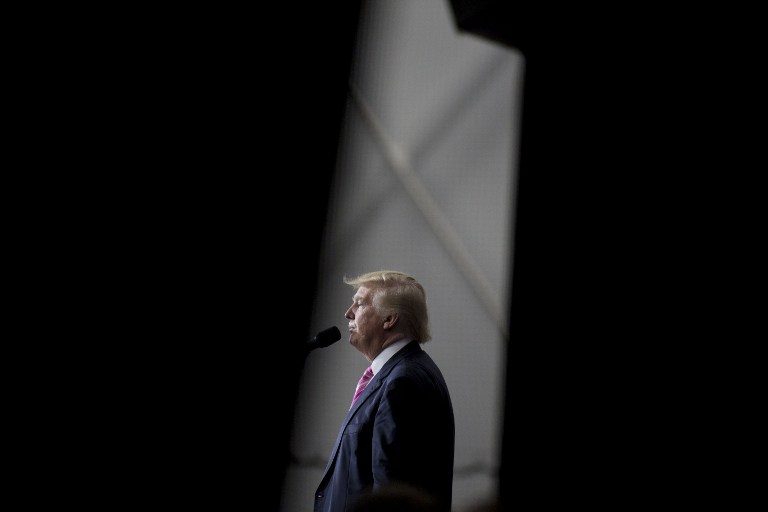 Facebook Twitter Copy URL
Copied
(UPDATED) Trump responds to The New York Times report on his taxes, saying he knows America's 'complex tax laws better than anyone who has ever run for president'

The revelations come after the outspoken Republican presidential candidate repeatedly refused to make his tax filings public, the first candidate to do so since Richard Nixon in the 1970s.

The billionaire’s tax records show “the extraordinary tax benefits” that Trump derived “from the financial wreckage he left behind in the early 1990s through mismanagement of three Atlantic City casinos, his ill-fated foray into the airline business and his ill-timed purchase of the Plaza Hotel in Manhattan,” The Times said in its Sunday, October 2 edition.

While Trump’s taxable income in the following years is unknown, “a $916 million loss in 1995 would have been large enough to wipe out more than $50 million a year in taxable income over 18 years,” the report said.

The Times said it received the 3 pages of the tax returns via mail from an anonymous source, with a return address on the envelope as Trump Tower in New York, the real estate tycoon’s headquarters.

The newspaper said it verified the authenticity of the documents and had them reviewed by a tax expert.

Trump has never held political office, so the core of his campaign relies on his alleged acumen as a successful businessman.

The Trump campaign issued a statement that said nothing about the veracity of the report, and did not address the $916 million loss.

“Mr Trump is a highly-skilled businessman who has a fiduciary responsibility to his business, his family and his employees to pay no more tax than legally required,” the statement said.

The campaign attacked The Times as “an extension of the Clinton Campaign, the Democratic Party and their global special interests.”

“BOMBSHELL,” wrote Clinton campaign spokesman Brian Fallon on Twitter. “Trump’s returns show just how lousy a businessman he is AND how long he may have avoided paying any taxes.”

Soon after the news broke late Saturday, October 1, Trump appeared agitated and veered off message repeatedly at a rally in Manheim, Pennsylvania.

Trump showed up more than 1.5 hours late to the event, then repeatedly rambled off on tangents, talking about his now-canceled reality TV show “The Apprentice,” “crazy” Bernie Sanders, the “dopes at CNN,” “phony pundits,” and how Clinton “could actually be crazy,” The Washington Post reported.

On Sunday, October 2, Trump responded to The Times on Twitter, saying: “I know our complex tax laws better than anyone who has ever run for president and am the only one who can fix them.”

He then claimed to have created “tens of thousands of jobs,” while “Hillary has only created jobs at the FBI and DOJ!” (Department of Justice).

Trump’s Democratic rival Hillary Clinton said Saturday she raised a record $154 million in September for her White House bid, up from $143 million raised in August.

Campaign donations usually increase as the November 8 election approaches, and the money raised is actually divided between Clinton’s campaign and the Democratic Party.

In August, Trump raised $90 million but his campaign has not yet released a figure for September.

Individual Americans can donate up to $2,700 to a candidate in a general election. Larger donations are distributed among the network of state parties.

Clinton and her Democratic allies begin the month of October with a war chest of $150 million to blitz TV, radio, and the internet with ads.

Clinton relies more than Trump on elite private fundraising events in which one ticket can cost hundreds of thousands of dollars.

Barbara Bush – one of Republican former president George W. Bush’s two daughters – was the surprise guest at a Clinton fundraiser for expats in Paris, CNN and Politico reported.

Barbara Bush even posed for a selfie group photo with Clinton confidant and top aide Huma Abedin and others, including a prominent fashion industry insider.

The Bush family has shown no love towards Trump, and Barbara’s 92-year-old grandfather, ex-president George H. W. Bush, reportedly said that he is voting for Clinton.

Clinton has seen her fortunes rebound after her strong September 26 presidential debate performance.

The latest average posted by RealClear Politics shows Clinton ahead of Trump by 3 percentage points, 43.8% to 40.9%.

The former secretary of state is expanding her lead after Trump’s popularity rose to within margin of error territory in many polls, and had crept ahead in some surveys. – Rappler.com