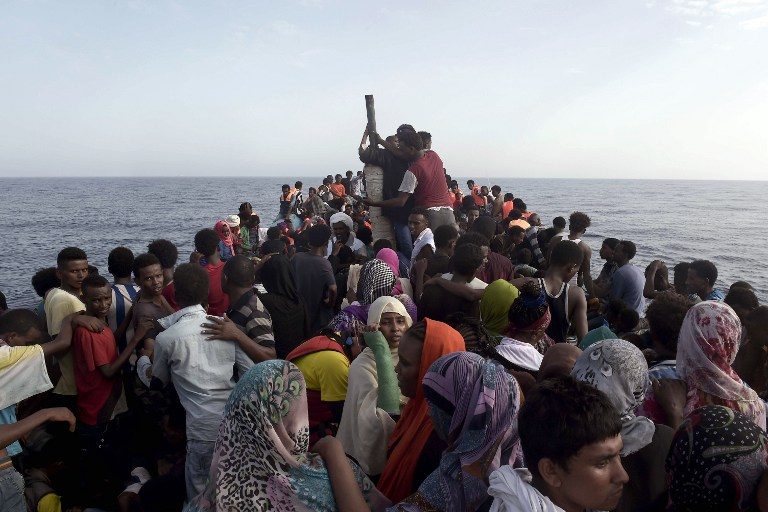 Facebook Twitter Copy URL
Copied
The latest people to be rescued adds to a total of some 132,000 migrants who have landed at Italy's southern ports so far this year

ABOARD THE ASTRAL, Italy – At least 32 Europe-bound migrants were found dead on a day of frantic rescues off Libya on Tuesday, October 4, an Agence France-Presse photographer on board one of the rescue boats said.

The photographer said Wednesday, October 5, that at least 29 people had died in a crush on board a overcrowded rubber dinghy and that three had died on a bigger wooden vessel that was carrying between 700 and 1,000 people.

The Italian coast guard – which is coordinating rescue efforts in international waters north of Libya – said late Tuesday that 28 bodies had been recovered over the course of 33 operations on Tuesday, while 4,655 migrants had been rescued.

The photographer was traveling on the Astral, a ship chartered by Spanish NGO ProActiva Open Arms, which helps with migrant rescues at sea.

It was yet another day of drama at sea after more than 6,000 migrants, most of them Africans in packed rubber dinghies, were rescued off Libya on Monday, October 3. Nine bodies were found in those operations.

With numerous rescue boats en route to Italy to unload the huge human cargo collected on Monday, the Astral was left alone to deal with the overloaded wooden boat for several hours.

It was aided only by lifeboats dropped by a Spanish military plane until the navy arrived at midday.

There was panic, with many people jumping into the water, according to the photographer.

The Astral’s rescue operations had begun before dawn and lasted until nightfall.

The latest people to be rescued will add to a total of some 132,000 migrants who have landed at Italy’s southern ports so far this year, fleeing conflict, poverty or persecution and hoping to start new lives in Europe.

The new arrivals are mostly Africans who plan to try to get to northern Europe but increasingly are obliged to seek asylum or the right to remain in Italy, where reception centers have been strained to bursting point. – Rappler.com