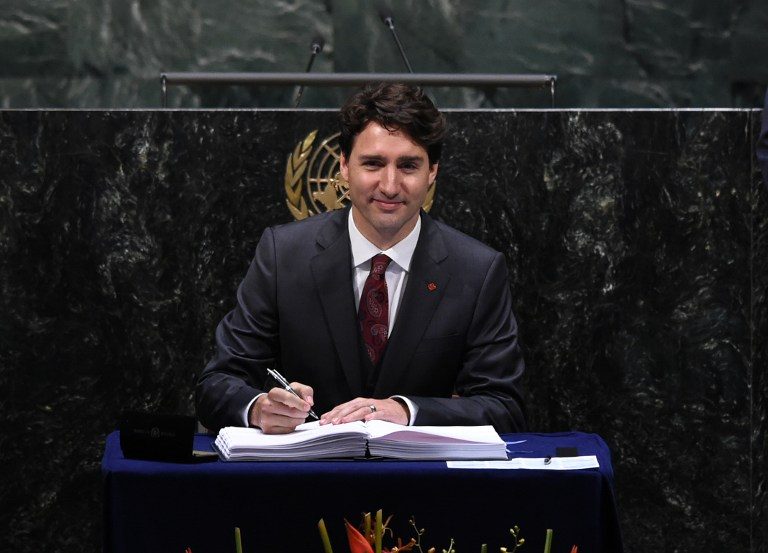 Facebook Twitter Copy URL
Copied
The 207-to-81 vote in the House of Commons came 30 days before the pact comes into force globally, and brings the total number of nations that have endorsed it to 74

The 207-to-81 vote in the House of Commons came 30 days before the pact comes into force globally, and brings the total number of nations that have endorsed it to 74.

Parliamentarians split along party lines, with Trudeau using his Liberal majority to push through ratification as the opposition Tories accused the government of heavy-handedness and betrayal.

The Paris accord requires all countries to devise plans to achieve the goal of keeping the rise in temperatures within two degrees Celsius (3.6 degrees Fahrenheit) above pre-industrial levels and strive for 1.5 C (2.7 F) if possible.

Last year Trudeau reached out to Canada’s 13 provinces and territories, which share responsibility for the environment with Ottawa, to hammer out a national climate strategy.

But each insisted they would tailor plans for their respective regions, which have vastly different economic circumstances and goals.

In a bid to break the deadlock, Trudeau on Monday, October 3, warned that he was prepared to impose a national minimum carbon price if a deal was not reached with the regional governments soon.

Officials from Saskatchewan, Newfoundland and Nova Scotia, however, walked out of a meeting with Environment Minister Catherine McKenna in anger after Trudeau’s bombshell, saying they felt “railroaded” and “betrayed” by the feds after nearly a year of consultations aimed at finding a consensus.

Ahead of the vote Wednesday, Foreign Affairs Minister Stephane Dion dismissed the political firestorm, saying it was “too bad” if the opposition or the regions were not on board.

His position was buoyed by a recent poll showing most Canadians want the federal government to take a leadership role on climate.

“It’s very important that humanity comes together to fight against one of the worst threats of our century, which is global warming,” Dion said.

Canada accounts for 1.95% of global emissions, according to United Nations figures.

An independent parliamentary watchdog said in April that the nation’s carbon emissions linked to global warming have stabilized at just over 700 million tonnes per year.

That is 208 million tons short of Trudeau’s commitment at the climate summit in Paris last December, which was to reduce emissions by 30%, compared with 2005 levels, by 2030. – Rappler.com