Facebook Twitter Copy URL
Copied
Chinese fishing and coastguard vessels have been embroiled in repeated confrontations with Indonesian patrol boats and navy ships in waters around the Natunas this year, sharply raising tensions between Jakarta and Beijing.

JAKARTA, Indonesia – The Indonesian air force Thursday, October 6, held a major exercise around its islands in the South China Sea where there have been clashes with Chinese vessels in waters claimed by Beijing.

Thousands of personnel as well as F-16, Sukhoi and Hercules planes took part in the drill around the remote Natuna islands in the far northwest of the archipelago, with President Joko “Jokowi” Widodo in attendance.

“We are conducting this exercise so that if there is an operation in this area, we know what to do,” he said.

Chinese fishing and coastguard vessels have been embroiled in repeated confrontations with Indonesian patrol boats and navy ships in waters around the Natunas this year, sharply raising tensions between Jakarta and Beijing. 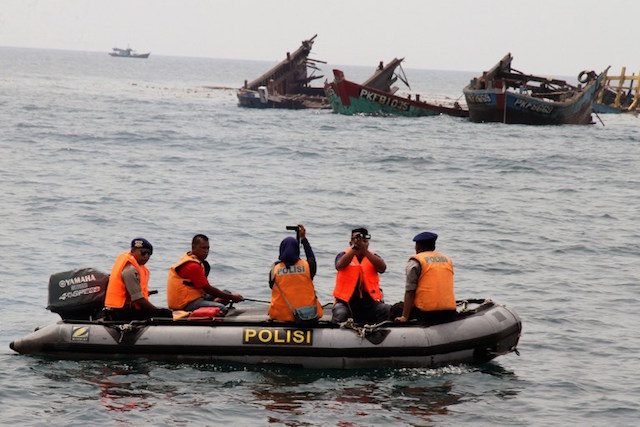 Indonesia is bolstering its defenses around the Natunas – a remote scattering of islands, home to rich fishing grounds – and plans to deploy extra warships, fighter jets and surface-to-air missiles.

Unlike some of its Southeast Asian neighbors, Jakarta has long maintained it has no maritime disputes with Beijing in the South China Sea and does not contest ownership of reefs or islets there.

But Beijing’s expansive claims in the sea overlap Indonesia’s exclusive economic zone – waters where a state has the right to exploit resources – around the Natunas.

China has defended its incursions into Indonesian waters around the islands, saying its trawlers are operating in “traditional Chinese fishing grounds”. But Jakarta disputes this. (READ: China angry after Indonesia fights back, seizes Chinese fishing boat)

Jokowi flew to the Natunas early Thursday to watch the air force drill, inspect weapons systems and observe the development of the fishing industry, his second visit to the islands in recent months.

In June he toured the islands on a warship to send a strong message to China to respect Indonesian sovereignty.

In July a UN-backed tribunal in The Hague ruled against China’s claims, finding in favour of a challenge from the Philippines which has long-running territorial disputes with Beijing in the waters. – Rappler.com