With one month to go, US election is Clinton’s to lose 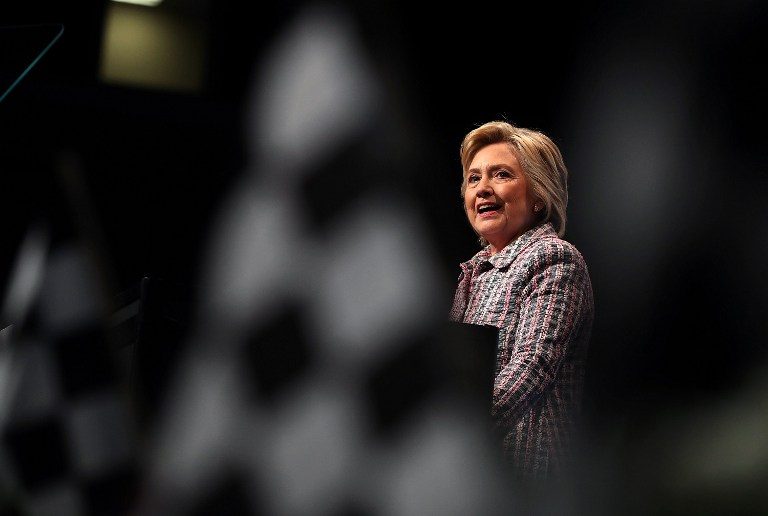 Facebook Twitter Copy URL
Copied
The possible pitfalls are unknowable now, but they have a potential to upend an already extraordinary 2016 campaign

WASHINGTON DC, USA – One month from Saturday, October 8, Hillary Clinton is favored to make history as the first female US president. But with a resilient Donald Trump standing in her way, the Election Day outcome remains anything but certain.

The possible pitfalls – an “October surprise,” a Clinton debate meltdown, damning revelations from her controversial private emails or an act of terrorism – are unknowable now, but they have a potential to upend an already extraordinary 2016 campaign.

The Democratic candidate has a 3.2-point advantage over her Republican nemesis, according to the RealClearPolitics national poll average, heaping pressure on Trump to make up ground in the closing weeks of their battle to succeed Barack Obama in the White House.

Trump, 70, is leading in Iowa and the crucial state of Ohio, where he claims strong support among working-class white voters. But Clinton, 68, would not need those states if she can hold other battlegrounds.

Campaign momentum had swung in Trump’s favor ahead of his first debate with Clinton, on September 26. The provocative real estate tycoon had seized on Clinton’s description of half of his supporters as “deplorables,” and earned praise for acting more disciplined.

But Trump – whose incendiary rhetoric and propensity to go off script have been campaign hallmarks – did not toe the line for long.

Not only did most analysts declare Clinton the debate’s winner, but Trump’s subsequent pre-dawn rant about a former Miss Universe raised doubts about his temperament as he seeks the world’s most powerful job.

“That looked pretty unpresidential, tweeting at 3:00 in the morning,” Shapiro said. “The polls have moved further in Hillary Clinton’s direction.”

Last week’s revelations that Trump’s declared loss of $916 million in 1995 allowed him to avoid paying federal taxes for almost two decades have not helped, even as he presented himself as “smart” for exploiting the complex tax code to his maximum advantage.

Democrats remain cautious about November 8, however.

Despite a cascade of insults and problematic policy proposals – Trump has described Mexican immigrants as “rapists,” called for a ban on Muslim visitors, and suggested providing Japan and Saudi Arabia with nuclear weapons – the celebrity billionaire emerged triumphant from the Republican primaries.

He swept aside 16 challengers, including Senator Ted Cruz, who branded him a “pathological liar.”

Trump became “the Teflon Don;” the more he was attacked, the stronger he became.

“I could stand in the middle of 5th Avenue and shoot somebody and I wouldn’t lose any voters, OK?” Trump exulted in January.

The most caustic US presidential campaign in decades has potentially turned off millions of voters.

But after 30 years in public life, Clinton – a former secretary of state, senator and first lady – remains deeply unpopular.

The case of her private email server, Republican exploitation of her handling of the deadly 2012 attack in Benghazi, Libya, concern over donations to the Clinton Foundation, and her connections to Wall Street collectively reinforce a narrative that she is not trustworthy.

Many Republican voters will be converting their hatred for Hillary into motivation to head to the polls.

Their overwhelming desire for change after 8 years of Obama is another factor. While Trump began the race with no political experience, he tapped into a deep well of anger at a system that many voters say has left them behind.

Trump – who, like Clinton, is viewed unfavorably by more than half of Americans – has harnessed that anger, but he, too, turns off voters.

“He has never been able to be consistent,” said political science professor Jeanne Zaino of Iona College.

“He has a few good weeks, and then he ends up with the Khan situation,” she said, referring to Trump’s attacks against the Muslim parents of a slain US soldier.

“He has a few good weeks, and he is attacking women calling them fat,” including beauty queen Alicia Machado, the subject of Trump’s late-night tweet storm.

For months, supporters urged Trump to start acting more presidential and even-tempered, but “it looks like he may have passed the point of no return on that,” Shapiro said.

The real estate billionaire has insulted Muslims and Hispanics, and broken with tradition by refusing to release his tax returns. Yet he continues to surprise.

He became the voice of millions frustrated by globalization, fearful of terrorism and betrayed by the political establishment.

Can he still bounce back with sharp performances in the second and 3rd presidential debates on October 9 and 19? Zaino predicted that would be difficult.

“I think it is really an uphill battle for him.” – Rappler.com