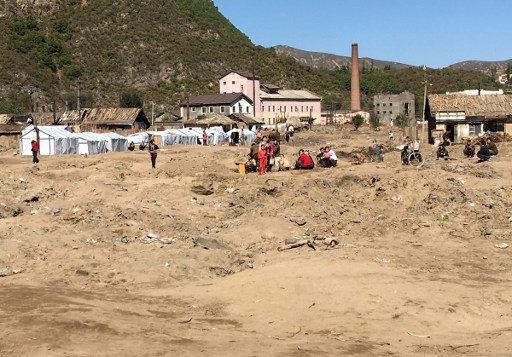 Facebook Twitter Copy URL
Copied
'Thousands of children are suffering and the impending winter will trigger a second disaster if we do not increase assistance for children and families,' says UNICEF's country head in North Korea Oyunsaihan Dendevnorov

SEOUL, South Korea – Humanitarian agencies are warning of a “second disaster” in flood-hit North Korea with tens of thousands – many of them children – still homeless as the region’s bitter winter approaches.

Nearly 70,000 people are estimated to have lost their homes in disastrous flooding in North Hamgyong province in August and September that claimed more than 130 lives.

In a joint statement Friday, October 7, Save the Children and UNICEF warned that flood-hit areas would begin to see sub-zero temperatures from the end of October as the “long and bitter” winter sets in.

“Thousands of children are suffering and the impending winter will trigger a second disaster if we do not increase assistance for children and families,” UNICEF’s country head in North Korea Oyunsaihan Dendevnorov said.

“They have lost everything: clean water, food, medicine and shelter. Without more attention, the suffering of children will only get worse,” Dendevnorov added.

The floods along the Tumen River, which partially marks the border with China and Russia, tore through villages, washing away buildings and leaving hundreds of thousands in urgent need of food and shelter.

Paolo Fattori, Save the Children’s Program Director in North Korea, urged donors to come through with funds before winter arrives. (READ: South Korea rules out flood aid to North Korea)

“The situation right now is urgent and on an enormous scale not seen here in decades. That’s why we need the international community to step up,” Fattori said.

The agencies are calling for $28.2 million in funding for immediate and long-term assistance, including repairing broken water systems and providing daily necessities like food, hygiene kits and temporary shelter.

The Red Cross has echoed the call for “urgent action” before winter sets in, but only 11% of the $15.5 million emergency appeal it launched on September 21 has been covered.

Aid agencies say raising money for humanitarian assistance in North Korea has become an increasingly difficult task given the global condemnation of its nuclear weapons program.

Some donors have questioned how the North can afford to develop and test nuclear weapons, but still need financial help to alleviate the suffering of flood victims.

The International Federation of Red Cross and Red Crescent Societies (IFRC) said homeless flood survivors were burning bits of wood in makeshift stoves to stay warm after losing their coal supplies in the flood waters.

“Last year that was in the 3rd week of October. People lack proper shelter, clothing and other basic items to stay warm and healthy through the winter,” Staines said, following a visit to the affected areas.

The impoverished and isolated North is vulnerable to natural disasters, especially floods, due partly to deforestation and poor infrastructure.

At least 169 people were killed by a massive rainstorm in the summer of 2012. – Rappler.com