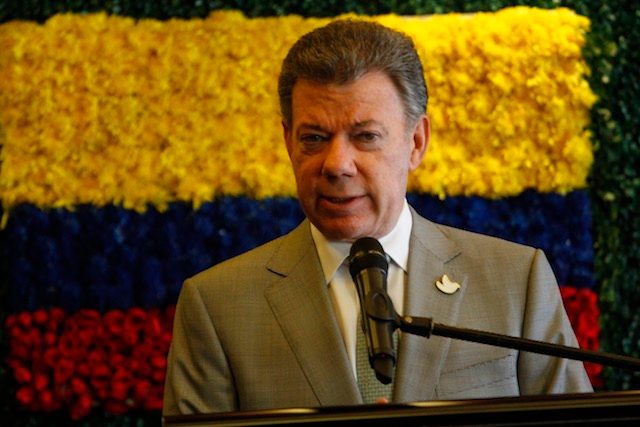 CARTAGENA, Colombia – Colombian President Juan Manuel Santos, who won the Nobel Peace Prize on Friday, October 7, is a wealthy businessman who staked his political legacy on making peace with the FARC rebels.

He sealed a historic deal last month with his former mortal enemy, the FARC guerrilla leader Timoleon “Timochenko” Jimenez, to end 5 decades of conflict – only to see it rejected by voters in a referendum last weekend.

“The Norwegian Nobel Committee has decided to award the Nobel Peace Prize for 2016 to Colombian President Juan Manuel Santos for his resolute efforts to bring the country’s more than 50-year-long civil war to an end,” said committee chairwoman Kaci Kullmann Five.

Santos and Timochenko come from different worlds: one a rich businessman and politician; the other a country boy turned Marxist guerrilla leader.

Santos, 65, led a major offensive against the Revolutionary Armed Forces of Colombia (FARC) as defense minister from 2006 to 2009.

After becoming president in 2010, he shifted tack and negotiated for a settlement with the guerrillas.

“He made war as a means to achieve peace,” said his brother-in-law and adviser, Mauricio Rodriguez.

“He weakened the FARC to make them sit at the negotiating table.”

The peace drive “required courage, audacity, perseverance and a lot of strategy – those are Santos’s strengths,” Rodriguez added.

Despite fierce opposition to the talks from some former allies, Santos staked his presidency on the peace process.

“I am not looking for applause. I just want to do the right thing,” he once said.

He won reelection in 2014 in a vote widely seen as a referendum on the talks.

Santos, who was born in August 1951 in Bogota, is the scion of a wealthy, powerful family entrenched in Colombian politics and the media.

He has described himself as politically in the “extreme center.”

He was educated at the London School of Economics and began his career as a journalist, covering the Sandinista revolution in Nicaragua as a young man.

He then switched to politics, serving in various ministerial posts. – Rappler.com