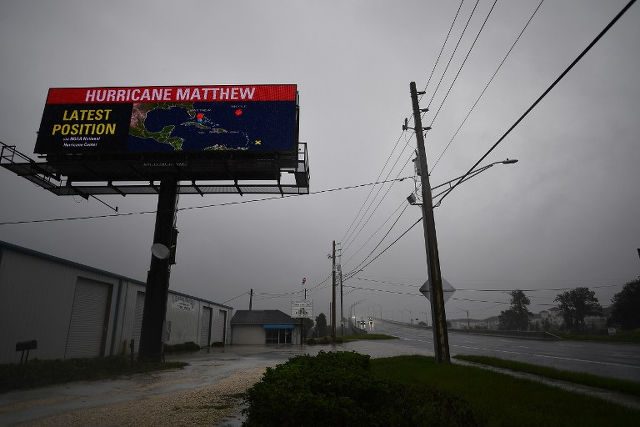 Facebook Twitter Copy URL
Copied
(3rd UPDATE) Emergency services are on lockdown and millions of people are urged to evacuate. Matthew hit Haiti as a Category Four hurricane, but weakened as it approached the US mainland.

JACKSONVILLE, USA (3rd UPDATE) – Hurricane Matthew weakened to a Category 1 storm Saturday, October 8, nearing the end of a four-day rampage that left a trail of death and destruction across the Caribbean and up the Atlantic coast of Florida.

The death toll in Haiti, where Matthew first made landfall on Tuesday, rose to at least 400, officials said, as the scope of the devastation became clearer in the impoverished Caribbean country’s hard-hit south.

But by 1300 GMT, a weakening Matthew appeared to be nearing the end of its run, lashing the southern coast of South Carolina after leaving more than a million people without power in Florida and claiming five lives in the United States.

The Miami-based National Hurricane Center (NHC) downgraded the storm to a Category 1 hurricane, with maximum sustained winds subsiding to a still dangerous 75 miles (130 kilometers) per hour.

It was located 20 miles southeast of Charleston, South Carolina, a port city with a historic city center.

The NHC said hurricane and tropical storm conditions were expected in Georgia and South Carolina, but the bigger threat may be a storm surge of as much as nine feet (three meters) in places.

“The combination of a dangerous storm surge, the tide, and large and destructive waves will cause normally dry areas near the coast to be flooded by rising waters moving inland from the shoreline,” the NHC said.

Authorities in South Carolina ordered thousands to evacuate inland to shelters, where people sprawled out in school gyms.

Millions of Americans were subject to evacuation orders and curfews were slapped on cities as the lethal storm barreled north after storming through Haiti, Dominican Republic, Jamaica, Cuba and the Bahamas.

“The weather experts have described Matthew as a once in a 100-year type of storm,” said Mayor Lenny Curry in Jacksonville, Florida, home to 850,000 people — nearly half of whom had been evacuated.

“We want our citizens to be safe. Our focus throughout this event has been public safety.”

At least five people died in hurricane-related incidents in Florida – two women killed by falling trees, a third woman from a heart attack and a couple killed by carbon monoxide as they ran a generator in their home’s garage.

In St Augustine – a former Spanish colony that calls itself the nation’s oldest city – roads were deserted Friday, many blocked by downed trees or flooded with ocean water and the city eerily empty under darkly menacing skies.

Mayor Nancy Shaver said up to half the population in vulnerable zones had refused to evacuate. Officials up and down the coast urged people to stay at home once the storm moved in.

Evacuation orders covered some three million residents, with cities like Jacksonville and Savannah, Georgia. in the storm’s path.

Cities including Savannah and Charleston in South Carolina ordered dusk-to-dawn curfews to keep people off the streets and guard against looting.

“Pray,” Republican Congressman Buddy Carter, whose district includes the Georgia coast, told a news conference. “Pray that this storm moves offshore and doesn’t come in to harm anyone.”

The presidential candidates – Republican Donald Trump and Democrat Hillary Clinton – received briefings on the storm from Homeland Security and each offered messages of solidarity to those affected.

Around 2,200 vulnerable people, including the sick, the elderly and young families, were bused out of Savannah. Officials threatened to arrest anyone caught defying a night-time curfew.

“To save my life, I’d leave home anytime,” said Eugene Johnson, 40, a forklift operator leaving with his 76-year-old father who recently suffered a stroke and has a heart condition.

“You gotta evacuate. If you stay, that’s like signing a death certificate. I don’t want to die, I’ve got to take care of my dad.”

The South Carolina Emergency Management Division tweeted that the situation was “DIRE for barrier islands” most exposed to the ocean.

South Carolina Governor Nikki Haley said the storm was “getting worse.” More than 300,000 of the 500,000 people in at-risk areas had been evacuated but that “was not enough.”

Some coastal islands, Haley added, “will be under water.” – Rappler.com