Clinton-Trump debate: The objectives of each candidate 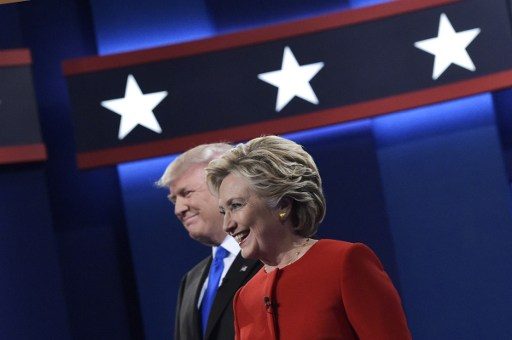 WASHINGTON DC, USA – For the 2nd US presidential debate on Sunday night, October 9, in St Louis, the pressure is squarely on Donald Trump, who needs a moment of political magic to reverse his slide in polls barely 4 weeks from Election Day.

Even though the Republican candidate trails Hillary Clinton in the polls, he wasted opportunities to regain the advantage over his Democratic rival in their September 26 showdown.

He often interrupted his opponent, showed flashes of petulance, and offered spotty answers to questions. He also failed to pursue several expected lines of attack against Clinton, including about the Clinton Foundation, her private emails while secretary of state, and her derogatory remark about Trump supporters as “deplorables.”

On Sunday, he will need more discipline in order to ignore the kinds of provocations that Clinton used to such advantage last month as she blunted Trump’s message. He must also adopt a more reassuring posture in order to attract moderate, centrist voters still waffling between the candidates.

The format poses its own difficulties for Trump: Half of the questions will be asked by undecided voters. He will want to build a personal connection with these everyday Americans and show his capacity for empathy, a quality that often has been drowned out in his large, raucous campaign rallies.

The Democrat, currently in the race’s pole position, aims to perform at least as well as she did in the first showdown.

She is more experienced than her rival in debates, having participated in more than 30 of them since launching her first White House bid, in 2008. She also took part in several events during the primary race that were similar to town meetings, where participants asked questions.

Clinton appeared uncomfortable in their first clash when she sought to justify her past positions on trade, including her early support for the North American Free Trade Agreement signed by her husband Bill and so heavily criticized by Trump.

She will likely seek to avoid the lawyerly presentation of her trade position that she offered on September 26, which may have contributed to the sense of distrust that many voters feel about her.

Clinton may also be prepared to deliver a fresh apology about her use of personal email while secretary of state, and provide a clearer explanation for what some have branded conflicts of interest regarding how her husband raised donations to the Clinton Foundation from business and foreign leaders.

As a woman who prepares meticulously for such debates, she no doubt has anticipated a possible attack by Trump on her husband’s past infidelities. – Rappler.com