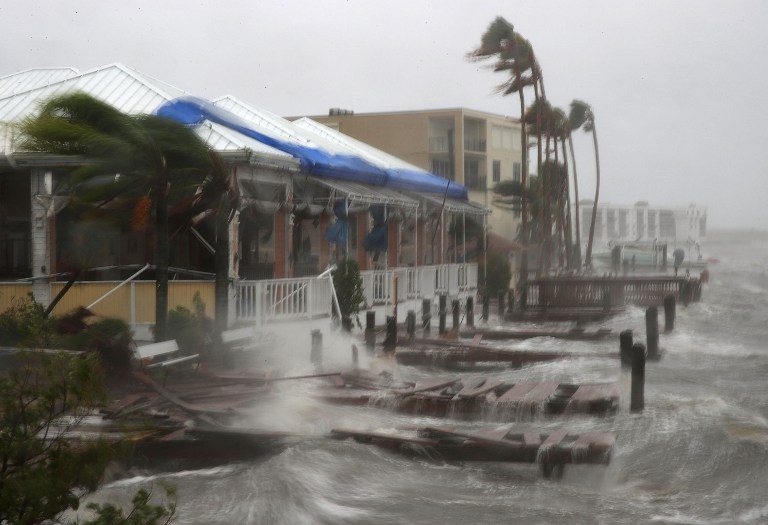 Facebook Twitter Copy URL
Copied
In Haiti, where Matthew was a monster Category 4 when it slammed into the poorest country in the western hemisphere Tuesday, October 4, the official death toll rises to at least 336

JACKSONVILLE, Florida / SAVANNAH, Georgia, USA – A weakened Hurricane Matthew made landfall Saturday, October 8, in South Carolina, nearing the end of a 4-day rampage that left a trail of death and destruction across the Caribbean and up the southeastern US coast.

In Haiti, where Matthew was a monster Category 4 when it slammed into the  poorest country in the western hemisphere Tuesday, October 4, the official death toll rose to at least 336.

Nine were killed in the United States.

The scope of the devastation in the south of the country was becoming clearer as the toll remains provisional due to the difficulty of gaining access to some areas and communications.

At least 336 people were dead, the head of Haiti’s civil protection services, Marie-Alta Jean Baptiste, told Agence France-Presse. “We won’t have a definitive toll before Wednesday [October 12],” she said.

Other officials said earlier that at least 400 were dead.

Half a million children live in the worst-hit departments in southern Haiti, according to UNICEF, which said it needed at least $5 million to meet the children’s immediate needs.

Pledges of aid have flooded in, with the United States announcing it was sending the USS Mesa Verde, whose 300 Marines will add to the 250 personnel and nine helicopters already ordered to deploy to Haiti.

France announced it was sending 60 troops, with 32 tons of humanitarian supplies and water purification equipment.

Matthew, downgraded to the lowest-level Category 1 hurricane, lashed the coast of South Carolina as the storm moved inland.

But despite flooding, fallen trees and power outages, most of the American southeast appeared to have been spared catastrophic damage as the storm surge turned out to be less severe than expected.

As Matthew approached – after storming through Haiti, the Dominican Republic, Jamaica, Cuba and the Bahamas – millions of Americans were ordered to evacuate and curfews were slapped on cities.

On Saturday, the center of Matthew made landfall in the South Carolina town of McClellanville and there was a “serious inland flooding event unfolding,” the Miami-based National Hurricane Center said.

McClellanville is about 35 miles (56 kilometers) northeast of Charleston, a port city with a historic city center.

The hurricane had maximum sustained winds of a still-dangerous 75 miles (130 kilometers) per hour.

The NHC predicted hurricane and tropical storm conditions in Georgia and South Carolina that could produce “life-threatening” flooding.

At least 4 people died in Georgia – including at least 3 killed by falling trees, officials said. Five people died in hurricane-related incidents in Florida.

The mayor of Georgia’s ocean-fronting community of Tybee Island described Matthew as the worst storm to hit the area since 1898.

Nearly 120,000 customers remained without power in the city of Savannah and its surrounding Chatham County, officials said.

Various roads were still impassable, there was a curfew on Savannah for a second night running and residents became increasingly frustrated that they were prevented from returning to homes.

Eric Thomas, 42, a local business owner, brought his own chainsaw to cut down a fallen tree that blocked access on the road from Savannah to Tybee Island, desperate to get home.

Although he and his friends cleared the road, police barred residents from driving across until Sunday at the earliest.

Thomas told Agence France-Presse that he heard there was “substantial” damage on the island.

In Florida, power was slowly being restored. Officials said that some 879,000 customers still were without power, or nine percent.

In Jacksonville, Florida, the rain had stopped. There were fallen trees and flooding but no major damage.

But the nearby historic town of St Augustine, a former Spanish colony that calls itself the nation’s oldest city, was not so lucky.

There was “a lot of damage,” Commander Chuck Mulligan, spokesman for the St Johns County Sheriff’s Office, told Agence France-Presse.