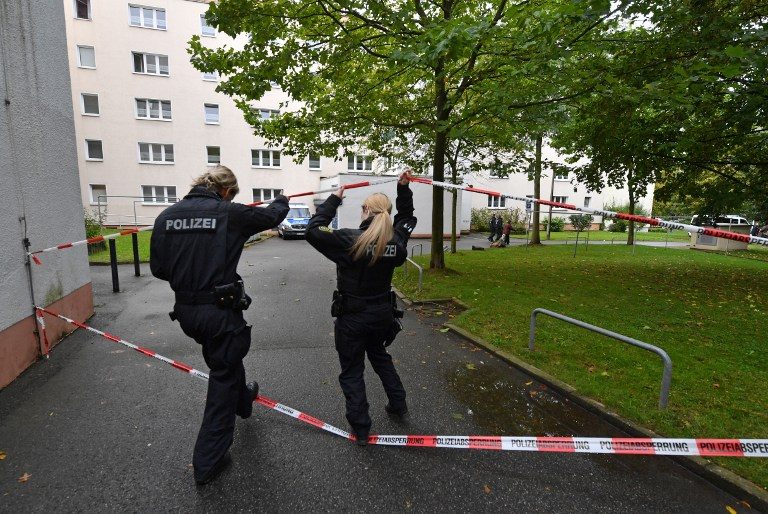 CHEMNITZ, Germany – German police on Sunday, October 9, hunted for a Syrian man suspected of plotting a jihadist bomb attack as investigators questioned his flat-mate after finding explosives in their apartment.

The man being questioned, a Syrian who had been detained the previous day, was remanded in custody by a judge on charges he had helped to plan a “serious act of violence.”

Security was stepped up at airports and train stations as it was unclear whether the fugitive, Jaber Albakr, 22, was carrying more bomb-making material or weapons.

“The search for the suspect is under way,” police said on Twitter. “We do not know where he is and what he’s carrying with him. Be careful.”

Albakr had narrowly escaped police commandos at dawn Saturday, October 8, as they prepared to arrest him in his flat in the eastern city of Chemnitz, about 260 kilometers (160 miles) south of Berlin.

Officers fired a warning shot when they saw the man leave the communist-era apartment block, but he managed to escape, reported news weekly Spiegel, labeling it “a possible police failure.”

Police said they then found several hundred grams of an “explosive substance more dangerous than TNT” in the flat, adding that “even a small quantity … could have caused enormous damage.”

Local media reported the material – which a bomb disposal squad destroyed in a controlled blast – was TATP, the homemade explosive known as “mother of Satan” that was used by jihadists in the Paris and Brussels attacks.

Albakr may have “an Islamist motive,” police sources on Saturday told AFP. German news agency DPA, citing security sources, said he was believed to have links to the Islamic State (ISIS) group.

Police rounded up 3 of Albakr’s known associates Saturday and remanded one in custody on Sunday, while letting the other two go.

“One of those arrested yesterday at Chemnitz railway station is the man renting the apartment that was searched yesterday and where several hundred grams of explosives were found,” said police spokesman Tom Bernhardt.

“An investigation into complicity is ongoing against this compatriot of the suspect … He has been presented to a judge” to be kept in detention, he said.

Bernhardt added that the search for Albakr has been extended “beyond the borders of Germany,” with police in contact with their counterparts in other EU countries.

Spiegel said Albakr had entered Germany on February 18, 2015 and two weeks later filed a request for asylum, which was granted in June that year.

Police said they were following some 80 possible leads against the fugitive, who was shown in a wanted picture wearing a dark hooded sweatshirt.

In one false alarm on Sunday, police led a passenger who they thought resembled the suspect off a Eurowings jet about to take off from Berlin’s Tegel airport, reported DPA.

Spiegel Online said that Germany’s domestic security service had on Friday, October 7, informed police that Albakr had been studying online how to assemble an explosive device and had recently obtained bomb making materials.

Police confirmed that as they prepared their raid around 7 am local time Saturday, Albakr emerged from the building, either by coincidence or because he had noticed the police.

“We were preparing the raid when the suspect left the building,” the police officer was quoted as saying by Spiegel.

Heavily-armed police commandos, wearing helmets and balaclavas, then evacuated over 100 residents from the building and blew open the door to the flat.

On Sunday, police maintained a high presence in Chemnitz and conducted searches at airports and other transport hubs.

Germany has been on edge since two ISIS-claimed attacks in July – an axe rampage on a train in Wuerzburg that injured 5, and a suicide bombing in Ansbach in which 15 people were hurt.

The bloodshed has rattled Germans’ sense of security and fueled concerns over the country’s record influx of nearly 900,000 refugees and migrants last year.

German police say they have foiled a number of bomb attacks this year.

In late September, police arrested a 16-year-old Syrian refugee in Cologne on suspicion he was planning a bombing in the name of ISIS.

A week earlier, they detained 3 men with forged Syrian passports who were believed to be a possible ISIS “sleeper cell” with links to those behind the November Paris attacks.

German authorities have urged the public not to confuse migrants with “terrorists,” but have acknowledged that more jihadists may have entered the country among the asylum seekers who arrived last year.

Chancellor Angela Merkel has come under pressure for her open-door policy for refugees, while the xenophobic and anti-Islam Alternative for Germany party has gained support, winning seats in 10 of the country’s 16 state assemblies. – Rappler.com