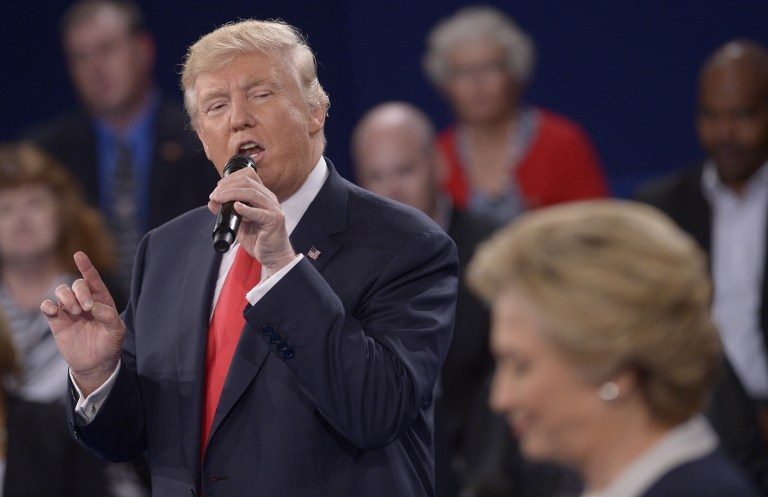 ST LOUIS, USA – A chorus of critics painted Donald Trump as a dictator in the making Sunday, October 9, after he threatened to imprison Hillary Clinton if he wins the White House.

Trump was called “dangerous,” “unfit” to be president and drew a series of unfavorable comparisons to Venezuela and Russia after he told his rival he would have her jailed if he were victorious in November.

“If I win, I’m going to instruct the attorney general to get a special prosecutor to look into your situation because there’s never been so many lies, so much deception,” the Republican told his Democratic rival during their second presidential debate.

He was referring to Clinton’s use of a private email server, which the Federal Bureau of Investigation has looked into and declined to prosecute.

When Clinton said that it was “awfully good” that someone with Trump’s temperament was not leading the nation, he shot back: “Because you’d be in jail.”

Former Attorney General Eric Holder led the condemnation, describing Trump as “dangerous/unfit” and pointing out that even president Richard Nixon’s top lawyer resigned when ordered to probe a political opponent.

A US president does not order the legal investigation of individuals.

Former US ambassador to Russia Michael McFaul tweeted that the comment “reminds me of autocracies I study. Embarrassed this is happening in America.”

Nobel Prize winning economist Paul Krugman said: “Let’s be clear: a candidate for president promised to put his opponent in jail if he wins. Everything else is secondary.

Trump was also tarred as undemocratic by fellow Republicans.

“Presidents don’t threaten prosecution of individuals. Trump is wrong on this.”

Bush speechwriter David Frum said: “Who would consent to serve as attorney general to a president who believed he could direct prosecutions of his political opponents?” – Rappler.com