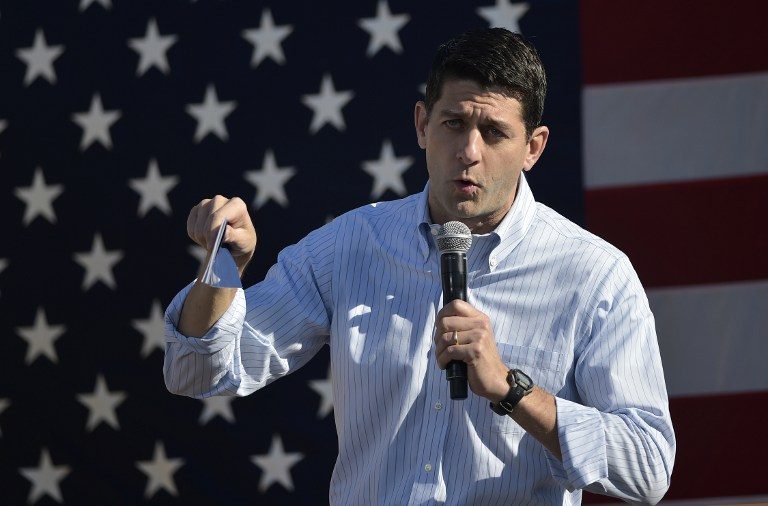 Facebook Twitter Copy URL
Copied
US House Speaker Paul Ryan tells fellow Republican lawmakers that he could no longer 'defend' Trump, and that the priority now is maintaining the party's control of Congress

With Trump’s campaign already teetering on the precipice after revelations of his lewd comments about women, US House Speaker Paul Ryan told fellow Republican lawmakers that he could no longer “defend” Trump, and that the priority now was maintaining the party’s control of Congress.

As Trump and Clinton headed Monday to key swing states after their fiery debate clash, with 29 days to go until Election Day, Ryan said he would not campaign with or for the provocative New York real estate mogul for the remainder of the race.

“He will spend his entire energy making sure that Hillary Clinton does not get a blank check with a Democrat-controlled Congress,” said a source on Ryan’s conference call with lawmakers.

“You all need to do what’s best for you in your district,” Ryan said, effectively giving cover to lawmakers considering severing ties with the controversial GOP flagbearer.

Trump quickly fired back on Twitter, saying Ryan “should spend more time on balancing the budget, jobs and illegal immigration and not waste his time on fighting Republican nominee.”

Ryan’s move sent the already unprecedented 2016 race into uncharted waters, as Trump grapples with the fallout from his own remarks and the wave of Republican lawmakers who have already abandoned him, including some who have urged him to step aside.

Trump’s candidacy suffered a crippling blow after a 2005 tape was released Friday in which he made lewd comments about women, including his ability to grab them by the crotch with impunity because, as a celebrity, “you can do anything.”

A new NBC News – Wall Street Journal poll, conducted after the video was released but before Sunday’s (October 9) debate, showed Clinton with an 11-point lead in a 4-way election – 46% to 35% – and a 14-point lead in a head-to-head match-up.

Trump’s running mate Mike Pence, who earlier condemned Trump’s remarks as offensive, was one of the few Republicans who offered his full-throated support on Monday, saying the nominee was a “big man” to apologize.

“I’m honored to be standing shoulder to shoulder with him,” Pence said.

Clinton and Trump sparred in Sunday’s town hall-style debate, which was a study in heated personal attacks and a stark reminder of the divisiveness that has come to mark the presidential race.

Before an estimated 66.5 million television viewers and a live audience including Bill Clinton and 3 women who have accused the former president of sexual misconduct, Trump threatened to jail his Democratic rival and lobbed incendiary allegations against her husband.

The 70-year-old real estate mogul apologized for “locker room talk” in which he bragged about groping women. But he stated baldly that “Bill Clinton was abusive to women.”

Asked repeatedly and directly if he had ever kissed or groped women without their consent, Trump finally answered: “No, I have not.”

Shattering the last vestiges of political decorum, Trump threatened the 68-year-old former secretary of state – whom he accused of having “hate in her heart” – with imprisonment if he wins the presidency.

On Monday, Trump doubled down on his pledge to investigate his rival if he wins, despite the suggestion being roundly denounced when he uttered it in the debate.

“Special prosecutor here we come,” Trump sneered at a rally in Ambridge, Pennsylvania.

Trump also took his assault on Bill Clinton a step further, branding him a “predator” and threatening to stay on the attack if more damning video about Trump emerges.

“If they want to release more tapes… we’ll continue to talk about Bill and Hillary doing inappropriate things,” Trump said.

He also sent a dark warning about the November 8 election, telling supporters it was “so important that you watch other communities, because we do not want this election stolen from us.”

Clinton meanwhile visited Detroit, Michigan, where she criticized Trump for deflecting responsibility for his past misogynistic statements.

During the debate, “Donald Trump spent his time attacking when he should have been apologizing,” she said.

Meanwhile, as Trump’s campaign was scrambling to avoid a full-on implosion, Ryan’s move triggered exasperation among some conservatives.

“We can’t even unify around the concept of defeating Democrats? What good are we?” Rush Limbaugh, a leading conservative talk radio host, said Monday. – Rappler.com