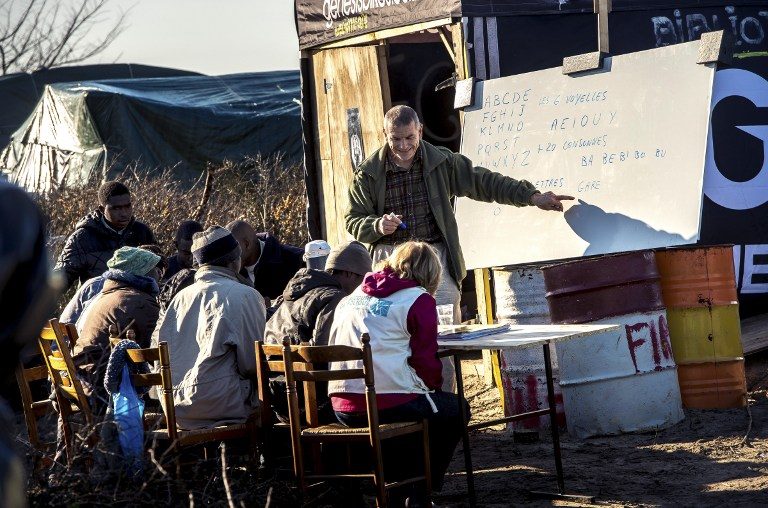 Facebook Twitter Copy URL
Copied
Britain has a 'moral duty' to let hundreds of migrant children join their relatives across the Channel, France says days before the notorious 'Jungle' camp in Calais is due to be bulldozed

PARIS, France – Britain has a “moral duty” to let hundreds of migrant children join their relatives across the Channel, France said Monday, October 10, days before the notorious “Jungle” camp in Calais is due to be bulldozed.

Campaigners are worried about the fate of unaccompanied child migrants, some as young as 8, at the sprawling shanty town on the north coast of France, once the authorities dismantle the site.

After meeting Cazeneuve later Monday, Rudd said that while Britain was ready to cooperate, it was still waiting for France to deliver a list of the children concerned.

“There are several hundred unaccompanied minors in Calais who have family in Britain,” Cazeneuve told RTL.

“We are in the process of drawing up a precise list and the British need to live up to their responsibilities.

Rudd, in a statement to parliament Monday, insisted Britain was ready to cooperate.

But she added: “The primary responsibility (for the children involved)… lies with the French authorities. The UK government has no authority in France.”

Britain was keen to bring as many eligible children over to Britain before the “Jungle” site was dismantled, Rudd said.

But before they could act, French officials needed to provide a list of the children concerned, she added.

“We will move with all urgency. A matter of days, a week at most,” said Rudd.

But while they were working to get an agreement from the French, “we haven’t got one yet”.

French officials have said that work to clear the camp could begin next week, with residents to be spread around reception centers across France.

The makeshift settlement has become a focal point in France of Europe’s migrant crisis, the subject of heated debate among politicians and a constant source of tension with Britain.

Cazeneuve said last week there were up to 950 children living in the “Jungle”, many of them unaccompanied.

The British Red Cross said 178 unaccompanied children in the camp had already been identified as having the right to claim asylum in Britain as they had family there.

The charity called on both governments to slash through the paperwork.

“We need urgent action from both the UK and French governments,” said spokesman Alex Fraser as the group released a report on the issue Sunday.

While both countries were working on the problem, “more can and must be done, on both sides of the Channel,” he added.

The Archbishop of Canterbury, Justin Welby, the leader of Anglicans worldwide, was among signatories of an open letter calling for the children to be admitted.

The children “have fled conflict and persecution, are now stuck in northern France, deeply traumatised and at great risk,” said the letter.

A number of other British religious leaders from different faiths also signed the letter, which was drawn up by the charity Citizens UK.

Another migrant died this weekend in the Calais region, the 14th such death this year.

The Eritrean died after being hit by a car on a motorway near the port city late Sunday.

Migrants desperate to get to Britain regularly try to stow away on lorries heading to the Channel ports for the crossing to England. – Rappler.com