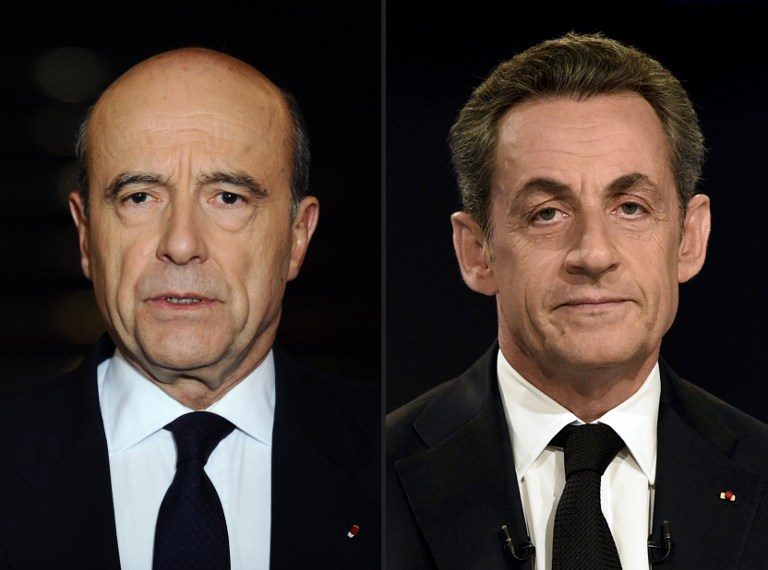 Facebook Twitter Copy URL
Copied
The brash Nicolas Sarkozy, 61, is waging an uphill fight for a return to the office he held from 2007 to 2012, lagging far behind his mild-mannered 71-year-old rival Alain Juppe in voter surveys

PARIS, France – France’s ex-president Nicolas Sarkozy and former prime minister Alain Juppe will come face to face on Thursday, October 13, for a televised debate ahead of a November primary widely seen as the main battle for the presidency.

The stakes could not be higher, as pollsters say whoever wins the nomination for the center-right Republicans party on November 27 is likely to take on – and defeat – far-right leader Marine Le Pen in the 2017 presidential election.

The brash Sarkozy, 61, is waging an uphill fight for a return to the office he held from 2007 to 2012, lagging far behind his mild-mannered 71-year-old rival in voter surveys.

Polls show Juppe with a lead of between 8 and 14 percentage points over Sarkozy for the first round of the primary on November 20, with five other candidates trailing behind.

All seven will take part in the debate on Thursday, the first of 4, including one on November 24, 3 days before the run-off for the nomination.

Meanwhile the left is flailing without a viable candidate for the presidential vote in April and May, with the deeply unpopular President Francois Hollande yet to decide whether to stand for re-election.

Le Pen of the National Front, riding high in the polls thanks to a surge of anti-migrant sentiment, is expected to place second or even win the first round on April 23.

With no left-wing figure likely to make it to the May 7 second round, the run-off is expected to pit Le Pen against either Juppe or Sarkozy, with the center-right candidate forecast to prevail.

Sarkozy is struggling for traction and has been accused of borrowing Le Pen’s themes, tapping into fears about immigration and Islam following a string of jihadist attacks in France in the past two years, coupled with the Europe-wide migrant crisis.

The former president confronted both subjects during a rally on Sunday, October 9, pledging to hold two referendums immediately after taking office – one aimed at curbing immigration and the other designed to make it easier to round up suspected Islamist radicals.

Juppe, currently France’s most popular politician, is taking the opposite tack, positioning himself as a unifier and a moderate, notably on immigration.

On Monday, October 10, he said Sarkozy was merely helping Le Pen with his proposals.

Sarkozy, who was faulted for flaunting his wealth in what was dubbed a “bling-bling” presidency, painted Juppe as an elitist on Sunday.

Without naming his rival, Sarkozy said: “I am running to talk about the daily lives of the French, not to represent an elite for whom everything is fine.”

Both men have been tarnished by scandal, though Sarkozy’s are fresher.

The ex-president faces inquiries into alleged influence-peddling and suspected illegal funding of his failed 2012 election campaign.

Juppe too was involved in a party finance scandal, which saw him convicted in 2004.

Those with longer memories will recall that Juppe’s austerity policies as prime minister sparked the longest period of strikes and stoppages France had seen since May 1968, bringing the Paris metro to a standstill for a month in 1995.

Juppe got his job back as mayor of Bordeaux after sitting out politics for two years in Canada in the wake of the 2004 conviction.

In a book out in September, he rankled at being seen as a cold, insensitive technocrat. “With time, I have softened, at least psychologically,” he wrote.

Philippe Marcacci of the Est Republicain daily said: “Besides the (rivals’) opposite styles of fire and ice there is the political wager.”

Marcacci wrote in an editorial that while Sarkozy has chosen to hammer away on security and immigration, Juppe “has made another choice – that of the centre”.

Gael Sliman of the Odoxa polling firm told Agence France-Presse: “Everyone expects Sarkozy, the outsider, to do a lot, even too much, to regain ground. He will have to be careful not to go overboard” during the debate.

Juppe, on the other hand, “should put himself above the fray without coming across as arrogant.” – Rappler.com