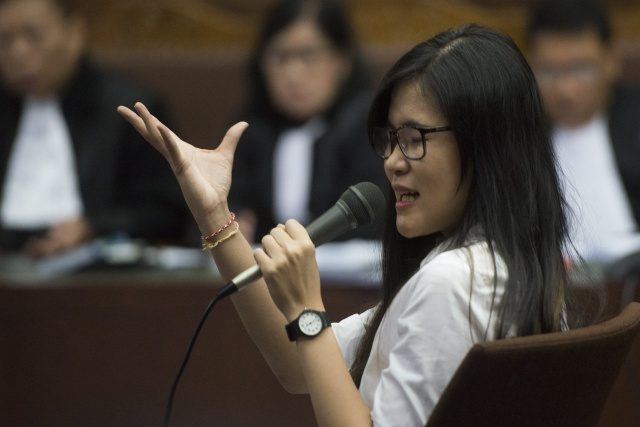 Facebook Twitter Copy URL
Copied
'I swear, I am not a murderer,' said Jessica Wongso, through tears

JAKARTA, Indonesia –An Indonesian woman accused of murdering her college friend by slipping cyanide into her coffee broke down in tears Wednesday, October 12,  as she took the stand to deny carrying out the crime.

Prosecutors are demanding that Jessica Kumala Wongso, an Australian permanent resident, be jailed for 20 years for the murder of Wayan Mirna Salihin, who collapsed and died after being poisoned at an upmarket Jakarta cafe in January. (READ: Did a 27-year-old kill her best friend?)

The “poison coffee” case has generated huge interest in Indonesia, with crowds packing out the court during the trial and TV networks showing it live, and in Australia where the victim and alleged murderer studied together at a design college.

Wongso, 28, strenuously denies the premeditated murder of her friend and on Wednesday took the stand in the Jakarta court to issue an emotional plea for the judges hearing the case to find her innocent. (READ: Trial begins for woman accused of killing her friend by poisoning her coffee)

“I swear, I am not a murderer,” she told the court, speaking through sobs.

“I didn’t kill Mirna so there shouldn’t be any reason to treat me like garbage.”

Wongso told how she had endured a nightmare since her arrest as she was locked up in a small police cell, and labelled a murderer by the police and Salihin’s family. (READ: Suspect in murder trial featured in fashion piece, angers citizens) “It makes me think, are they mean because they lost Mirna or did they lose Mirna because they are mean?” she told the court.

Prosecutors last week recommended the hefty jail term for Wongso, alleging that she decided to kill the victim after Salihin, 27, advised her to break up with her boyfriend as he was using drugs.

They accused the bespectacled design graduate, who lived in Sydney until last year, of planning the murder “meticulously” before inviting Salihin to a cafe at a mall, where she slipped cyanide into her Vietnamese iced coffee.

The defense team in the trial, which began in June, asserts the case against their client is weak and lacks evidence to prove guilt.

Australian authorities agreed to assist with the case after receiving assurances that Wongso would not be handed the death penalty if found guilty of murder, a capital crime in Indonesia.

A verdict will be handed down at a later date. – Rappler.com