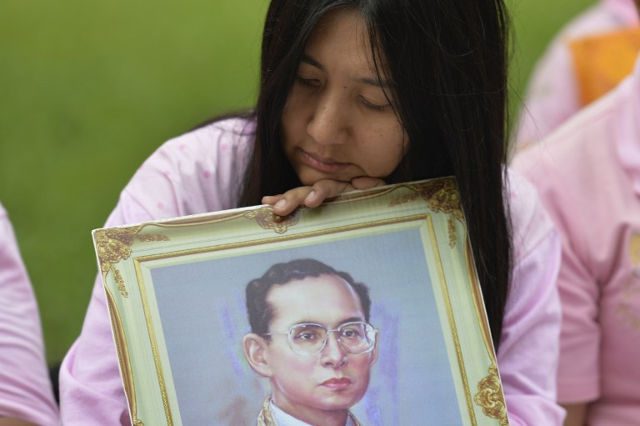 Facebook Twitter Copy URL
Copied
(UPDATED) Bhumibol is the world's longest-reigning monarch and beloved by many in Thailand, where is he is seen as a unifying figure in a country riven by political rivalries.

BANGKOK, Thailand (UPDATED) – The health of Thailand’s King Bhumibol Adulyadej is “still unstable”, the palace said late Wednesday, October 12, with the 88-year-old on a ventilator and battling a new infection as crowds gathered to pray outside his Bangkok hospital.

Bhumibol is the world’s longest-reigning monarch and beloved by many in Thailand, where is he is seen as a unifying figure in a country riven by political rivalries.

But he has not been seen by the public for nearly a year as he battles a series of ailments in a Bangkok hospital, a source of great anxiety for many in the kingdom.

In a fresh health update released on Wednesday evening, the palace said new blood tests from Tuesday showed the king’s liver was working “irregularly” and that there was heightened levels of uric acid in his blood.

Both are signs of organ failure.

“The doctors have given him antibiotics and have corrected acid levels in his blood, placing him on a ventilator together with CRRT (Continuous Renal Replacement Therapy),” the Royal Household Bureau said in a new statement.

“His illness overall is still unstable,” it added.

The statement followed a similarly pessimistic palace health update on Sunday that has triggered market jitters inside Thailand this week as well as public prayers for his well-being.

By late evening around 300 well-wishers had gathered outside Siriraj Hospital where the king has spent much of the past two years. Many held aloft portraits of the king and were moved to tears by a week of grim news.

“It feels like he is getting worse this time,” said Somchit Naravichit, 58, tears welling in her eyes.

“Millions of Thais are sending him support, praying for him and wanting him to get well soon,” she told the Agence France-Presse.

Around lunchtime Thai media travelling with junta chief General Prayut Chan-O-Cha in the eastern province of Chonburi said the leader had abruptly cancelled all official engagements and returned to the capital with little explanation.

The stock market promptly plunged, losing as much as 6.8% soon after the announcement although it later recovered to close 2.5 percent down.

By late afternoon junta officials downplayed the significance of Prayut’s urgent departure and said he returned to the capital to meet with named heir Crown Prince Maha Vajiralongkorn, who spends much time outside the country.

“The Prime Minister did not undertake his official duties in Chonburi province today in order to prepare for an audience with His Royal Highness the Crown Prince for a routine presentation on the government’s work in progress,” said junta spokesman Lieutenant General Sansern Kaewkamnerd.

Bhumibol’s health is a sensitive subject and palace officials maintain tight control over news about his condition.

Privately many business leaders — both domestic and foreign — fret that the king’s demise could lead to economic instability, especially as there is no official discussion on how the country will handle his passing.

The baht was headed towards its steepest weekly drop in three years, trading at 35.90 on Wednesday, according to Bloomberg data.

“It’s about the political stability that the king has provided and his being a reconciliatory buffer between the major parties,” he told Bloomberg.

The last two health statements are noticeably grim in their prognosis. Previous statements have tended to end on a positive note after successful treatment.

The king has battled a range of ailments in the last two years including regular infections, breathing difficulties, renal failure and hydrocephalus — a build-up of cerebrospinal fluid commonly referred to as “water on the brain”.

Most Thais have known no other monarch and many revere Bhumibol as the kingdom’s moral leader.

Vajiralongkorn, 64, has yet to attain his father’s widespread popularity.

There was no official confirmation on where the Crown Prince was travelling from although publicly available flight records showed his private Boeing 737 flew from Munich, where he owns property, to Frankfurt early on Wednesday morning.

Since Sunday’s announcement, many Thais have started wearing pink in the belief it will bring the king good luck.

Security was stepped up at the riverside hospital where Bhumibol is being treated, with a spokeswoman saying they expected the Crown Prince to make an imminent visit to see his father.

“The king is very important to us because he has done everything for the people,” Suwanna Kaennumtiang, a 62-year-old woman holding a portrait of the king, said.

“He is like my angel. I pray to his photo on my bedside everyday.” – Rappler.com