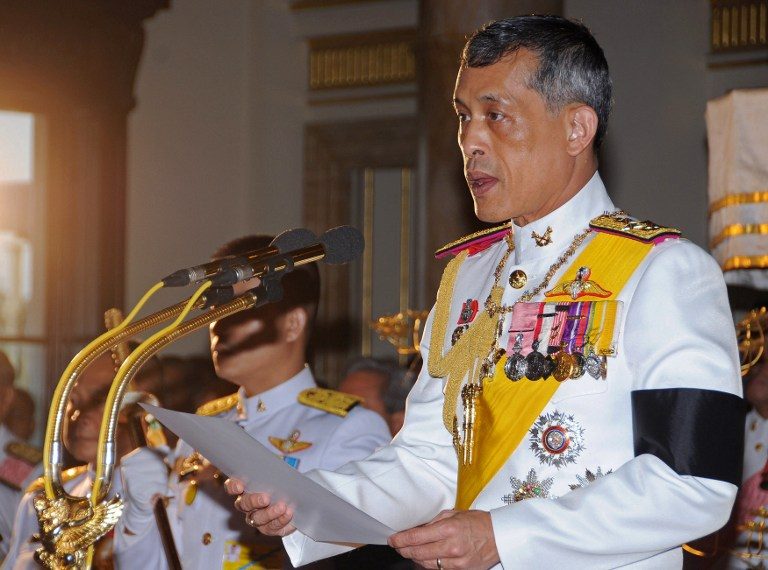 Facebook Twitter Copy URL
Copied
(UPDATED) 'I had a royal audience with the Crown Prince (Maha Vajiralongkorn) and he asked for time to prepare before being proclaimed as the new king,' Prime Minister Prayut Chan-O-Cha tells reporters at Government House

BANGKOK, Thailand (UPDATED) – Thailand’s junta chief late Thursday said the country’s crown prince has asked for time before being officially proclaimed the next monarch following the death of his father King Bhumibol Adulyadej earlier in the day.

“He asked for time to prepare for legal processes in order to proclaim him on the throne at the appropriate time,” Prime Minister Prayut Chan-O-Cha told reporters at Government House after holding an audience with Crown Prince Maha Vajiralongkorn.

In a unexpected announcement that could fuel concerns over the succession, Prayut added the prince asked for “time to prepare and expressed regret together with the Thai people” for the loss of his father.

The 64-year-old prince has been Bhumibol’s named successor since 1972.

In a nationally televised statement immediately after Bhumibol’s death was announced, Prayut confirmed that the crown prince was his named successor.

The latest announcement now suggests there will be a delay between Vajiralongkorn being officially made the next king as he mourns his father and prepares to take on the royal mantle.

“When the appropriate time comes, the crown prince said he is already aware of his duty as the heir or crown prince,” Prayut told reporters.

“I hope everyone will understand and not cause chaos,” he added.

Bhumibol was immediately proclaimed successor the same day his brother died in 1946.

Thailand’s parliament held a late night special session at which many had expected the crown prince to be officially proclaimed the new king by lawmakers.

But the session ended after a short statement was read out announcing Bhumibol’s death and after a 9-minute silence was held for the deceased monarch, marking his official title Rama IX. – Rappler.com