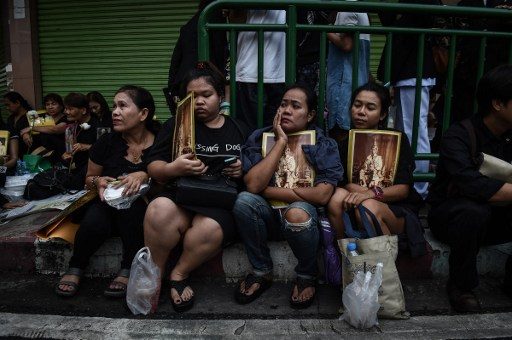 BANGKOK, Thailand – Many Thais revered late king Bhumibol Adulyadej, who passed away at the age of 88 on Thursday, October 13, with near god-like devotion. Here’s why.

Is his popularity among Thais comparable to how Europeans feel about their royal families?

The love is much more intense among Thais who undoubtedly felt a deep spiritual connection with their king. He was widely seen as a serene and caring father of their nation and a representation of their own best Buddhist values and beliefs. Most genuinely love him for what they see as his modesty, humility and life-long commitment to helping the poor.

In a near cult-like atmosphere, the king’s picture hangs in every taxi, office and shop. Before movies, cinema-goers stand in homage as images of him flash across the screen.

Thai politics has seemed to be in a constant state of chaos during his 7-decade reign. Why is he not blamed?

While Bhumibol was monarch there were more than a dozen coups or attempted coups, and the kingdom is once again under military rule after generals ousted another democratically elected government in 2014.

Yet many Thais do not see their late king as a contributor to the turmoil, but rather a much-needed figure of authority and stability who yielded his power sparingly but decisively.

In one of his most famous interventions, Bhumibol in 1992 called then-prime minister General Suchinda Kraprayoon to his palace and humiliated him on television for ordering a bloody military crackdown on demonstrations against his government. The prime minister resigned.

But he did not intervene during some other political crises, and approved most of the successful coups during his reign. (READ: Thai King Bhumibol, late father of a divided nation)

How did he actually help Thais, in tangible economic terms?

Many Thais believe the king devoted his life to helping the poor, and he sponsored thousands of royal projects aimed at alleviating poverty. Thais credit him with water-control projects that have stopped flooding in Bangkok, and pioneering cloud-seeding technologies that brought rain over drought-stricken farmlands. He is also hailed for helping to quell opium growing among hill tribes in the north of the country by introducing alternative farming opportunities.

What do Thais love about him personally?

In his younger days, Bhumibol enjoyed a reputation for having that X-factor of coolness and charisma. He was heavily promoted as an accomplished jazz saxophonist, composer, photographer and yachtsman. Bhumibol once played the saxophone with jazz legend Benny Goodman and won a gold medal for sailing at the Southeast Asian Peninsula Games in 1967. In his later years he was seen as a sage, dispensing advice through parables about his favourite dog, an adopted stray. Books about his dog outsold bestsellers, such as Harry Potter, in Thailand.

Was he really as talented, skilled, compassionate and virtuous as all this?

A relentless and powerful propaganda machine has burnished the king’s reputation. He also built a fortune for the monarchy worth tens of billions of dollars, while siding with the elites that have perpetuated their rule over the masses.

And although he famously said in 2005 that he was not above criticism, the law says otherwise. Thailand has lese majeste laws that carry penalties of up to 15 years for anyone who “defames, insults or threatens” the king. (READ: Tributes for Thai king as concern swirls over nation’s future) – Rappler.com