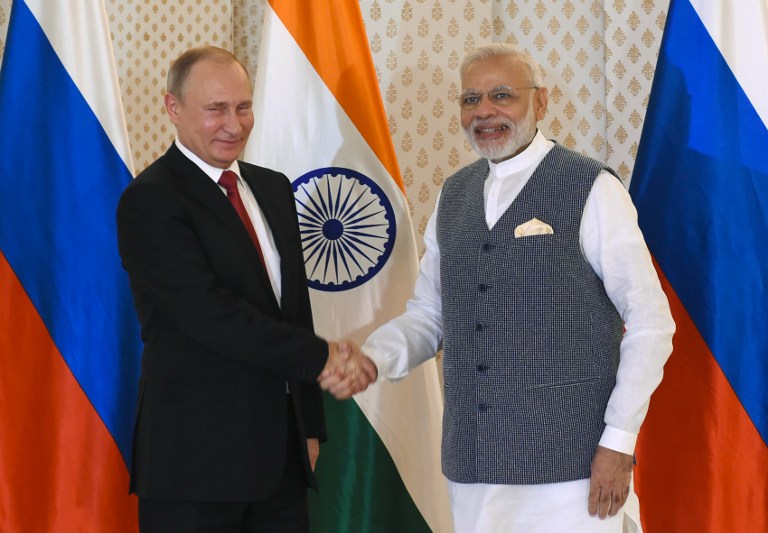 Modi hailed Putin as an “old friend” after their meeting in the Indian state of Goa, where leaders of the other BRICS emerging nations were also gathering for a summit.

“Your leadership has provided stability and substance to our strategic partnership,” Modi said alongside Putin at a beachside resort, after officials signed up to 20 agreements between the two nations.

Modi said the pacts on jointly producing light military helicopters, building frigates and other areas of cooperation “lay the foundations for deeper defense and economic ties for years ahead”.

They also signed an initial agreement on India’s purchase of Russia’s state of the start defense system, capable of shooting down multiple incoming missiles, although there were no details on a timeframe for delivery.

India, the world’s top defense importer, is undergoing a $100-billion upgrade of its Soviet-era military, as it looks to protect its borders from arch-rival Pakistan and an increasingly assertive China.

But India has increasingly turned to the United States, and more recently France, rather than Russia, for its hardware, as Modi cultivates closer ties with Washington.

Putin has been seeking to seal deals with India in an attempt to help revive Russia’s recession-hit economy, following sliding oil prices and Western sanctions over the Ukraine crisis.

The leaders also focused on energy deals to meet India’s growing thirst for fuel and electricity for its fast-growing economy.

Russia’s biggest oil company Rosneft signed an agreement to buy India’s Essar Oil reportedly for $13 billion, in what will be one of the largest foreign investments in India’s refining sector.

The leaders also signed a framework agreement to supply more reactors to a nuclear plant in Kudankulam in southern India, which is attempting to reduce its reliance on highly polluting coal for power.

The leaders discussed the threats posed by regional and “global terrorism” although it was not clear if this included India’s hiked tensions with archrival Pakistan.

Putin was seen as unlikely to weigh into the dispute between the rival neighbours, as Moscow also eyes closer defense ties with Islamabad. Russia and Pakistan carried out their first joint military exercise last month.

The deal for Russia’s most modern air defense system has been in the pipeline for a few years, along with the helicopters, and the building of up to four frigates in India.

India will purchase about 200 of the choppers to replace its ageing fleet under a joint venture over several years, with some manufactured in India, as it reduces its reliance on military imports.

“In the next few months, a  place will be allocated (for manufacture) and there will be investments,” Russian Trade and Industry Minister Denis Manturov told Agence France-Presse (AFP).

India and Russia have traditionally held strong ties dating back to the 1950s after the death of Stalin. But trade has slipped beneath $10 billion since 2014, as Modi cultivates closer diplomatic and economic ties with Washington, while Russia eyes Pakistan and also China.

Modi will also hold talks with China’s President Xi Jinping late Saturday, also in the hope of boosting investment and trade. Relations however have been frustrated by Beijing’s decision so far to block New Delhi’s entry to a nuclear trade group, among other issues.

China and India, the world’s two most populous nations, are jockeying for regional influence in Asia.

Modi will host a dinner for the leaders of the BRICS club – which also includes South Africa and Brazil — who arrived Saturday ahead of talks on Sunday that are expected to focus on trade and terror-related threats.

BRICS was formed in 2011 with the aim of using its growing economic and political influence to challenge Western hegemony. – Rappler.com