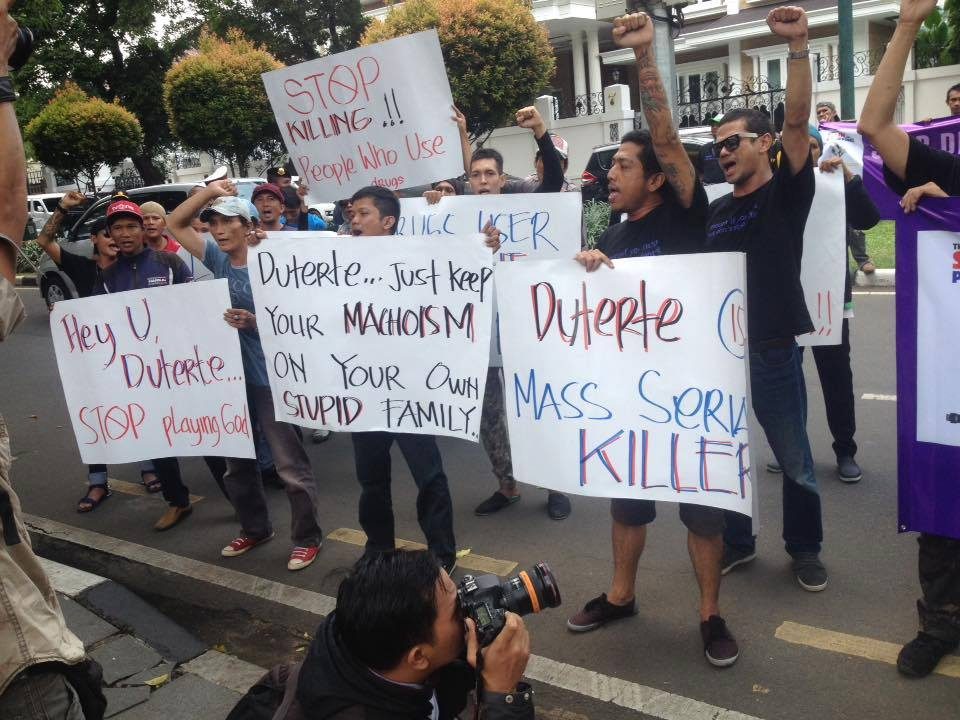 Facebook Twitter Copy URL
Copied
From Indonesia to Canada, open letters are sent to Philippine President Rodrigo Duterte asking him to change his approach to a more constructive, evidence-based one that addresses the root causes of drug use

JAKARTA, Indonesia (UPDATED) – Across the ocean from the Philippines, Indonesians refused to keep quiet about the drug-related killings in their neighboring country.

“Duterte is [a] mass serial killer,” read one poster. Another was more direct: “Stop killing people who use drugs.”

The harsher ones were unforgiving. A poster with Duterte’s face and a Hitler-like mustache was displayed alongside the words: “Duterte… Stop playing God!”

Still another read in broken English: “Duterte, just keep machoism on your own stupid family.”

Protesters raised their arms and chanted their disapproval of a policy the group’s leadership said “will serve only to further marginalize and punish the poor.”

In an open letter addressed to Duterte which the group submitted through the embassy of the Philippines in Indonesia, Edo Agustian, the group’s national coordinator, asked for a halt “on the killing of people who use drugs in the Philippines.” “I implore your Excellency President Duterte to reconsider the current approach of executing people who use drugs in favor of internationally accepted evidence-based alternatives,” the letter said.

The PKNI is the Indonesian arm of the International Network of People who Use Drugs (INPUD). INPUD, headquartered in London, describes themselves as a “global peer-based organization that seeks to promote the health and defend the rights of people who use drugs.”

On their website, the groups says they aim to “expose and challenge stigma, discrimination, and the criminalization of people who use drugs and its impact on the drug-using community’s health and rights.”

The protest comes in response to Duterte’s war on drugs, which has been linked to the deaths of more than 4,000 people allegedly involved in illegal drugs. (IN NUMBERS: The Philippines’ war on drugs)

Duterte had said that his critics have overlooked the gravity of the drug problem in the country which, he said, has 3.7 million drug users based on data from the Philippine Drug Enforcement Agency. 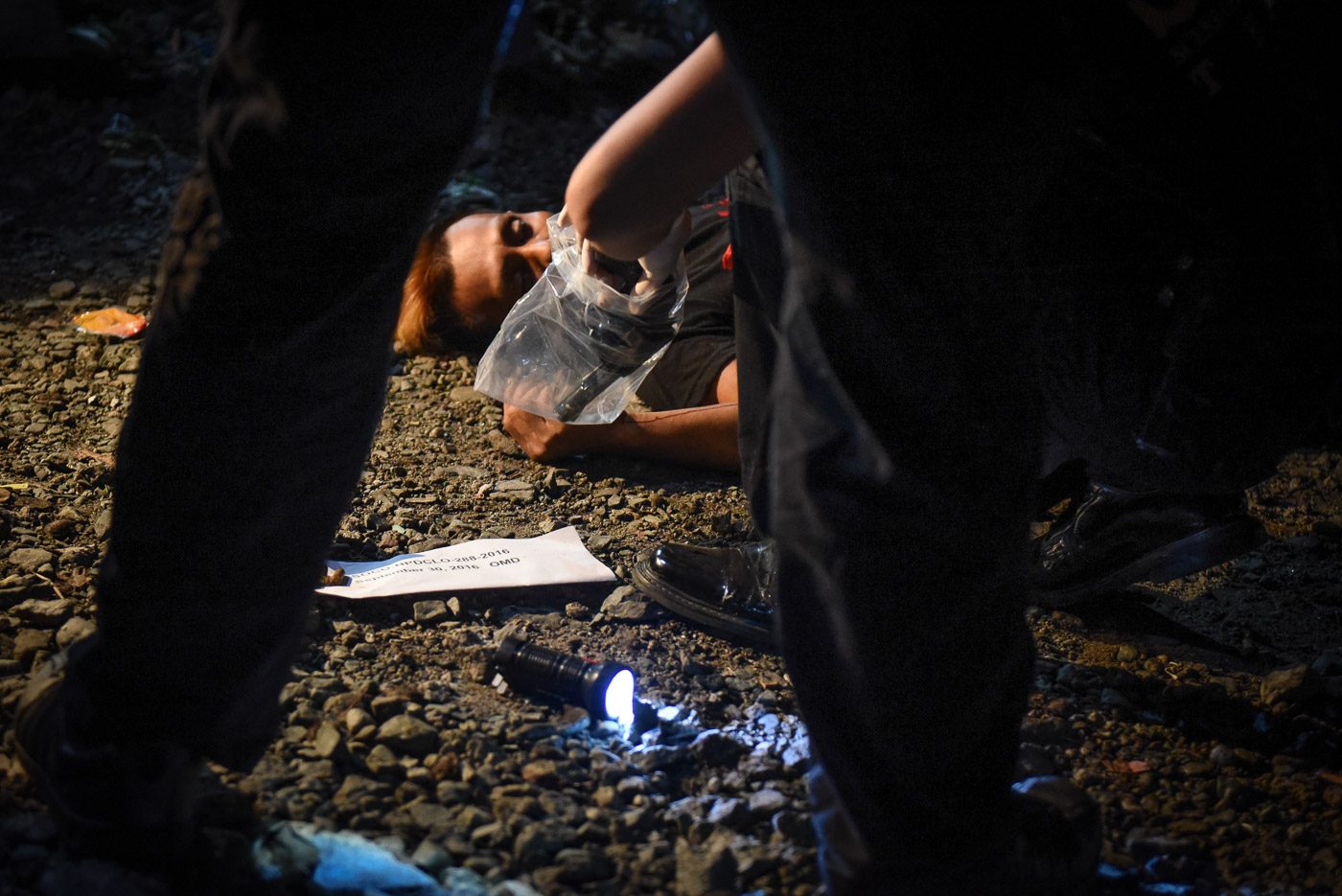 The Dangerous Drugs Board, however, places the figure at less than half or 1.8 million, based on its latest survey.

The President had likened his war on drugs to Adolf Hitler’s annihilation of Jews during the last war, a comparison that drew international outrage, prompting him to issue a public apology to the Jewish community.

The letter addressed to Duterte referenced recommendations from the United Nations and the World Health Organization to bolster their appeal, arguing that both organizations have “recommended that the most effective and successful responses to drugs involve tolerance and social inclusion for people who, for whatever reason, use psychoactive subtances.”

It said what is important in eliminating drug use is alleviating poverty and marginalization, and promoting inclusive communities and families, as proven by data and evidence.

“An overwhelming focus on punitive responses towards people who use drugs has not diminished harm and misery, but in fact has only served to reinforce and create more misery and harm for communities,” it said. The letter urged the Philippine president to “consider alternative systems of social support and treatment for people who use drugs” an approach which “sits within the public health framework of harm reduction, which seeks to use science and evidence to minimize the harms associated with drug use.”

Agustiar did not blame Duterte for alleged extrajudicial killings and acknowledged his “intention to find a rapid solution to drug use in the Philippines,” but called for a more humane approach.

“I understand that you have not ordered extrajudicial killings; however some of your words, suggesting people kill drug users in the streets, may have indirect consequences of being taken literally. The recent spate of killings is of great concern,” he said.

“Your reputation as a guardian of the poor precedes you Mr President, yet this approach of killing drug users will serve only to further marginalize and punish the poor.”

The Asian Network of People who Use Drugs (ANPUD) supported the same message.

The protests were encouraged by IPUD on its Global Week of Action to address what they called a “crisis for people who use drugs in the Philippines.” “People who use drugs no longer have the right to life in the Philippines,” it said in its call to action addressed to drug user networks and activists, and human rights and drug policy agencies around the world.

The IPUD called for groups to hold “peaceful demonstrations at embassies and consulates of the Philippines around the world.”

It also circulated a poster that read, “There’s a stain on the Philippines. Stop killing people who use drugs!”

Aside from Indonesia, other countries followed suit to protest the killings.

In Canada, at least 7 groups signed an open letter addressed to Duterte calling for 3 things: an immediate end to the extrajudicial killings, harassment and violence by the police against people use drugs; prosecution of those responsible for extrajudicial murders; and for the Canadian government to end its training and cooperation with the Philippine National Police and the Armed Forces of the Philippines implicated in the recent extrajudicial killing of people who use drugs.

Overseas reactions that have decried the President’s drug policy have come from the United Nationas, the US government, US President Barack Obama, the European Parliament, the European Union, and other human rights organizations.

Department of Foreign Affairs spokesperson Charles Jose reacted to the protests before the Indonesian embassy and the open letters sent to the President, saying only that killings are not sanctioned by the government.

“We have been clear and consistent in our position, i.e., there are no state-sanctioned killings. The Philippines adheres to the rule of law and to the principles of human rights,” he said in an email to Rappler.

“The Philippine government does not condone the alleged extrajudicial killings. In fact, President Duterte has ordered that these alleged EJKs be investigated.” (READ: Duterte gives middle finger to EU again)

This is not the first protest against Duterte in Indonesia. Members of the Confederation of Indonesian Workers Union decried what they perceived as the lack of government action on the recent spate of kidnappings by the Abu Sayyaf, a violent Islamic separatist group based in the Philippines, and asked Duterte to stop the kidnappings.

Indonesian hostages have since been released under Duterte’s presidency, with only two Indonesians left in captivity.