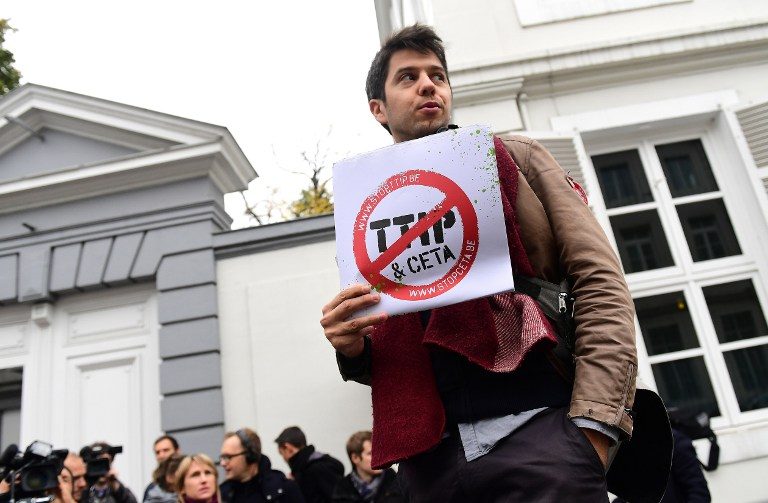 But Tusk said after a telephone call with Trudeau late Monday that the Comprehensive Economic and Trade Agreement (CETA) could still be salvaged.

“Together with PM Justin Trudeau, we think Thursday’s summit still possible. We encourage all parties to find a solution. There’s yet time,” Tusk tweeted.

He did not say whether Thursday’s summit would involve signing the accord or involve more negotiations on a deal which took seven years to nail down and another two years to get to the final approval stage.

She added: “Canada is ready to sign CETA, but the ball is in Europe’s court and it’s time for Europe to do its job.”

Belgian Premier Charles Michel said his government could not endorse the deal after brief talks in Brussels failed to win over the leaders of Wallonia and other French-speaking regions.

“We are not in a position to sign CETA,” said Michel who pointed out that the federal government, the Dutch-speaking region of Flanders and the German-speaking community all supported the agreement.

To go ahead, all 28 EU member states, including Belgium, must endorse the pact that would link the EU’s single market of 500 million people – the world’s biggest – with the 10th largest global economy.

The European Commission, the EU executive, also said earlier there was still time to conclude the agreement despite fears in some quarters it was now close to collapse.

Wallonia leader Paul Magnette said as he left talks with Michel that he could not endorse the accord under what he called the pressure of an ultimatum, after Tusk called for an answer by late Monday.

“It is evident that in the current circumstances, we cannot give a ‘yes’ today,” he said.

Magnette and other critics criticize terms of the deal intended to protect international investors which, they say, could allow them to force governments to change laws against the wishes of the people.

CETA is opposed by anti-globalization groups who say it is a test model to push through an even more controversial EU-US trade deal called TTIP, on which talks have also stalled.

Wallonia has support around Europe and from non-government organizations like Greenpeace, which fears the deal will reward “corporate greed” at the expense of hard-won EU health and environmental standards.

Apart from sowing tensions with the European Council and the European Commission which strongly support the deal, Wallonia’s position highlights long-standing divisions in Belgium between the northern and wealthier Flemish-speaking region of Flanders, which backs CETA and sees its southern, French-speaking left-leaning compatriots as wasteful spendthrifts.

It also delivers a fresh blow to the EU, still in shock after the June Brexit vote and trying to cope with its worst migration crisis since World War II – alongside a faltering economy.

Canada has made no secret of its anger with Belgium and the EU after talks last week with Magnette ended frustratingly for Freeland.

She ended up walking out of the negotiations and blasting the EU as “incapable” of signing international agreements.

Businesses back CETA as a guarantee of much-needed jobs and growth in the EU, as well as a testament to its trustworthiness as an actor on the international stage.

“We still can and we have the duty to urgently bring home the best trade agreement the EU has ever negotiated,” BusinessEurope lobby group head Emma Marcegaglia said in a statement.

Bernd Lange, chairman of the International Trade Committee of the European Parliament and fervent CETA supporter, doubted the Belgians would move much further if they had been unable to do so under the current pressure.

“CETA is de facto dead. Possibly there will be another try to sign it in a few weeks but I am not persuaded that this will succeed,” Lange said. – Rappler.com