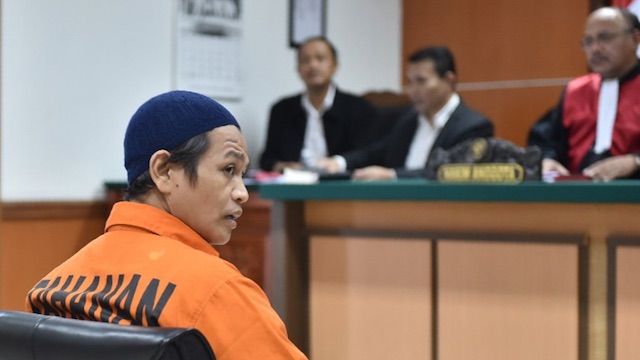 JAKARTA, Indonesia – An Indonesian court Tuesday, October 25, jailed an Islamic State group supporter for 8 years for his role in a deadly gun and suicide bombing attack in Jakarta, the latest extremist sentenced over the assault.

Ali Makhmudin, 41, was found guilty of breaking anti-terror laws by helping prepare bombs used in the attack in the heart of the Indonesian capital in January, which killed 4 civilians and 4 attackers.

The attack – the first claimed by IS in Southeast Asia – saw dramatic scenes as a suicide bomber blew himself up in a Starbucks and security forces battled gun-toting militants.

It was the first major attack for 7 years in Indonesia, which has long struggled with Islamic militancy.

A Jakarta court found Makhmudin guilty of committing an act of terror and sentenced him to 8 years in jail.

Although he did not directly take part in the assault, presiding Judge Muhammad Noor said his actions had nevertheless “caused widespread public fear and ran counter to the government’s programme to eradicate terrorism”.

Makhmudin, who pledged allegiance to IS in 2014, said he accepted the court’s decision.

The court heard that Makhmudin made casings for several pipe bombs used in the attack after he was contacted for help by a militant, who went on to take part in the assault.

Makhmudin gave the devices to another militant, who transported them to Jakarta and handed them to the attackers. They were later found at the scene of the attack.

The sentencing came after two other IS supporters were jailed last week over the assault, one for helping to make a bomb and a second for trying unsuccessfully to procure weapons and ammunition.

Dozens of people have been arrested over suspected involvement.

IS has proved a potent new rallying cry for radicals in Indonesia, the world’s most populous Muslim-majority country, and hundreds have flocked to the Middle East to fight with the jihadists.

Last week police shot dead a man carrying knives, suspected pipe bombs and an IS symbol after he assaulted officers near Jakarta.

Other IS-linked incidents this year include a foiled plan to launch a rocket at an upmarket Singapore waterfront district from an Indonesian island and a botched suicide bombing attack on a police station that killed only the assailant. – Rappler.com