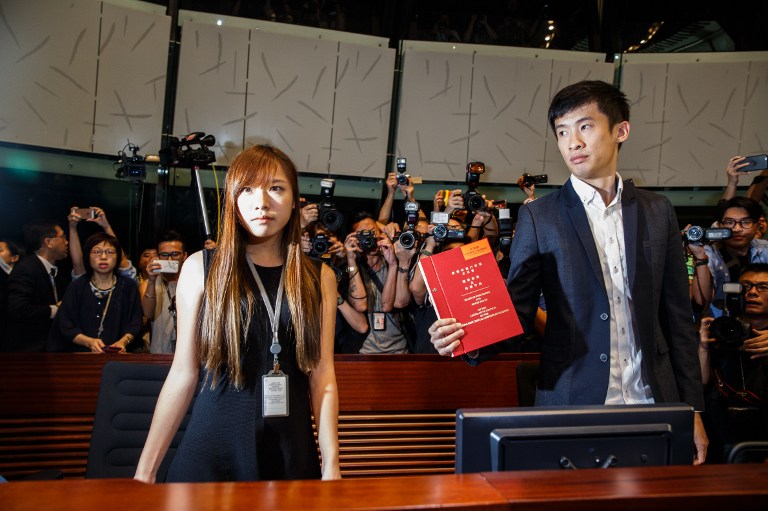 HONG KONG – Hong Kong’s legislature was again reduced to chaos Wednesday, October 26, as political divisions deepen over the swearing in of two new lawmakers who advocate a split from Beijing.

There are growing concerns in the semi-autonomous city that China is tightening its grip, fueling an independence movement.

But new pro-independence lawmakers Yau Wai-ching and Baggio Leung are yet to be sworn in to the Legislative Council (Legco) – Hong Kong’s lawmaking body.

Their oath-taking was put on hold and they were temporarily barred from meetings Tuesday, October 25, pending a judicial review into their first attempt at taking the pledge two weeks ago.

At that ceremony, they draped themselves in “Hong Kong is not China” flags and altered the wording of their pledges, including derogatory terms and expletives.

But on Wednesday morning they were bundled in to the chamber through a media scrum by supportive legislators demanding they be allowed to take their oath.

The pair ignored repeated calls from pro-Beijing Legco president Andrew Leung for them to leave, with some pro-democracy lawmakers shouting for him to resign.

The session was abandoned after around 30 minutes.

New lawmaker Nathan Law, who advocates self-determination for Hong Kong, said that while he may not endorse the pair’s behavior when they first took their oaths, they should be allowed to sit as elected lawmakers.

“What we are trying to protect is people’s rights to vote, and Hong Kong’s legislative system,” Law told reporters.

Outside the building, thousands of pro-Beijing supporters waved China’s national flag and called Yau and Baggio “scum”, holding up photos of them pierced with darts.

Legco president Leung gave Baggio and Lau a second chance to take their oaths last week – but pro-Beijing legislators staged a walkout and that session was unable to continue.

Pro-Beijing lawmakers had again threatened to walk out this week if the two were allowed to re-take their oaths.

Hong Kong’s city leader and the justice secretary also last week launched a legal bid to disqualify Yau and Baggio because of their behavior during the first swearing-in session.

Leung said Tuesday night he would defer Baggio and Yau’s oath-taking until the judicial review is complete – it is due to start on November 3, but could last months.

Until that time they would not be able to enter the chamber, he said.

“This decision is painful but necessary. If I did not make it, Legco would stop functioning,” Leung told reporters Tuesday.

Pro-Beijing legislators supported his decision Wednesday, while critics said he had caved in to pressure from the pro-China camp.

“We hope the Legislative Council can resume order as soon as possible, and respect the decision made by the president,” pro-Beijing lawmaker Starry Lee told reporters. – Rappler.com