Oct 26, 2016 4:04 PM PHT
Agence France-Presse
Facebook Twitter Copy URL
Copied
(3rd UPDATE) Around half of the camp's estimated population of 6,000 to 8,000 migrants have been transferred out since Monday, October 24 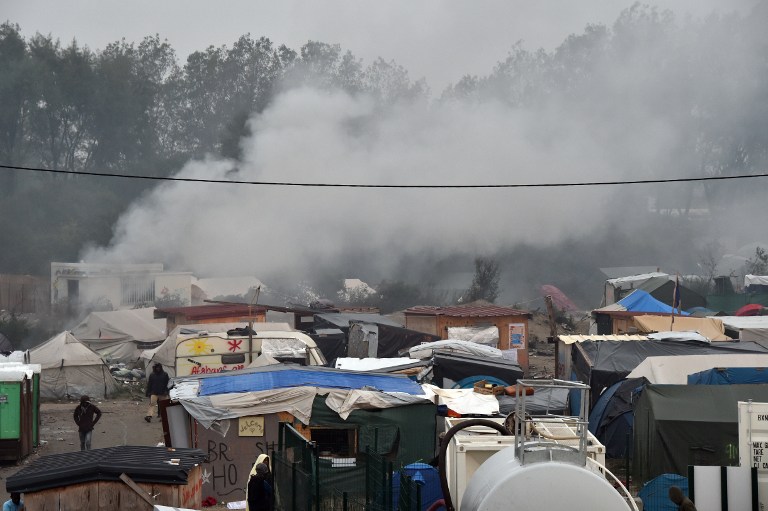 CALAIS, France (3rd UPDATE) – Fresh fires broke out Wednesday, October 26, in the “Jungle” on the second day of operations to dismantle the squalid migrant camp in northern France, sending people fleeing with their meager belongings.

Huge clouds of black smoke billowed over the sprawling settlement near the port city of Calais, which the French authorities said they expect to finish clearing by the evening.

Scores of riot police were massed on the outskirts of the Jungle, where the flames destroyed many of the tents and makeshift shelters that had housed the thousands of migrants and refugees including children.

“We have it within our means to close the waiting lines by this evening. After the last migrants are taken in hand, the lines will close,” senior local official Fabienne Bucco told AFP.

Migrants and officials alike said the fires that blazed through the camp overnight and early Wednesday were set deliberately, while exploding gas cylinders caused them to spread.

Police said 4 migrants had been arrested on suspicion of arson.

“They are angry because the Jungle is finished and they cannot go to England,” Yones said.

Many migrants could be seen taking selfies with the flames in the background.

“You have to leave,” an aid worker shouted at some migrants. “You have these gas cylinders in your caravan, get them out!”

Scores of people escaped to an area just outside the camp. Police barred them from going back in and they were seen on the road, some carrying backpacks and suitcases.

Around half of the camp’s estimated population of 6,000 to 8,000 migrants have been transferred out since Monday, October 24, boarding buses to centers around France.

Nearly 800 unaccompanied minors – whose fate has been a key cause of concern on both sides of the Channel – have been moved to shipping containers converted into temporary shelters in the Jungle, according to the interior ministry.

Meanwhile, workers in orange overalls ramped up demolition operations, tearing down tents and makeshift shelters at the lawless camp that has become a symbol of Europe’s migrant crisis.

Fires broke out Tuesday, October 25, within hours of the start of the demolition.

A Syrian man was taken to hospital with injured eardrums after a gas canister exploded in the flames.

French Interior Minister Bernard Cazeneuve said Tuesday that all minors “with proven family links in Britain” would eventually be transferred there.

He said London had committed to reviewing all other cases where it was “in the child’s interest” to settle across the Channel.

British interior minister Amber Rudd on Monday pledged to bring eligible children from France to Britain “as quickly and as safely as possible,” without specifying numbers.

The head of Save the Children on Tuesday called for a smooth process to ensure their safety.

“It’s very scary, I think, for kids particularly… This is where children have been living for weeks and months in some cases,” Carolyn Miles told AFP in New York.

‘There’ll be another Jungle’

Britain took in around 200 teenagers in the week before the clearance began, with the transfers resuming Tuesday after a pause on Monday.

Dozens of mainly Eritrean and Ethiopian women, who make up a tiny minority at the Jungle, staged a protest on Wednesday to demand attention to their own needs.

“Underage, overage, we are the same!” they shouted.

Located next to the port of Calais, the Jungle has for years been a launchpad for migrants attempting to make it to Britain by sneaking onto lorries or jumping onto trains heading across the Channel.

Calais police have battled near-nightly attempts by migrants to reach Britain over the past year.

The authorities have said those who agree to be moved can seek asylum in France. Those who refuse risk deportation.

Many locals fear more settlements will sprout up in the area once the Jungle is razed.

Aid worker Christian Salome said migrants still bent on reaching Britain were looking for places to stay in and around the city of Calais.

“I’m staying here,” said Kanami, a Pakistani. “There will be another Jungle.” – Rappler.com