Oct 26, 2016 7:10 PM PHT
Agence France-Presse
Facebook Twitter Copy URL
Copied
(UPDATED) Tens of thousands of Iraqi fighters continue to advance on Mosul from the south, east, and north, as they aim to retake the city from the Islamic State 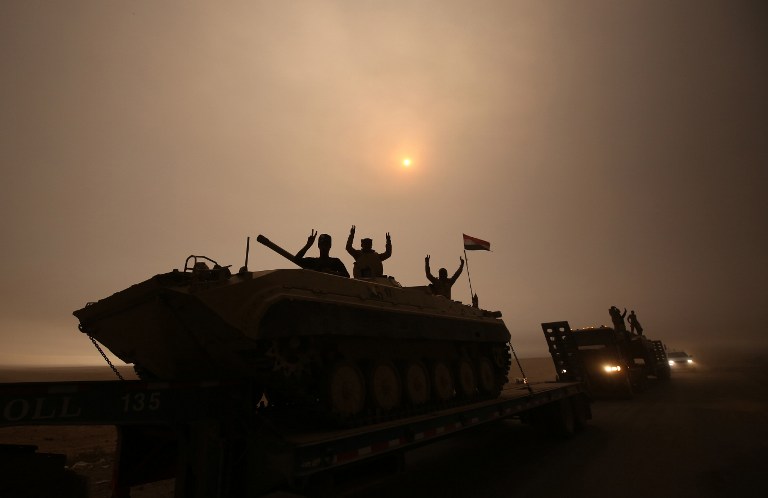 KHAZIR, Iraq (UPDATED) – Jihadists with the Islamic State (ISIS) group were shaving their beards and changing hideouts in Mosul, residents said, as a major Iraqi offensive moved ever closer to the city on Wednesday, October 26.

With pressure building on the 10th day of the Mosul assault, Western defense chiefs were already looking ahead to the next target – ISIS’ other major stronghold of Raqa in Syria.

Recent advances on the eastern front have brought elite Iraqi forces to within 5 kilometers (3 miles) of Mosul, and several residents reached by AFP said the jihadists seemed to be preparing for an assault on the city itself.

“I saw some Daesh (ISIS) members and they looked completely different from the last time I saw them,” eastern Mosul resident Abu Saif said.

“They had trimmed their beards and changed their clothes,” the former businessman said. “They must be scared… they are also probably preparing to escape the city.”

Residents and military officials said many ISIS fighters had relocated from eastern Mosul to their traditional bastions on the western bank of the Tigris river, closer to escape routes to Syria.

The sounds of fighting on the northern and eastern fronts of the Mosul offensive could now be heard inside the city, residents said, and US-led coalition aircraft were flying lower over the city than usual.

Tens of thousands of Iraqi fighters have been advancing on Mosul from the south, east, and north after an offensive was launched on October 17 to retake the last major Iraqi city under ISIS control.

Raqa ‘in next weeks’

The assault is being backed with air and ground support from the US-led coalition which launched its campaign against ISIS two years ago, shortly after the jihadists seized control of large parts of Iraq and Syria.

Iraqi federal forces, allied with Kurdish peshmerga fighters, have taken a string of towns and villages in a cautious but steady advance over the last week in the face of shelling, sniper fire, and suicide car bombings.

About 3,000 to 5,000 ISIS fighters are believed to be inside Mosul, Iraq’s second city, alongside more than a million trapped civilians.

With the noose tightening on Mosul, officials from the 60-nation anti-ISIS coalition have increasingly pointed to the next phase of the fight.

Both US Defense Secretary Ashton Carter and British counterpart Michael Fallon said Wednesday they expected an offensive on Raqa to be launched within weeks.

“It starts in the next few weeks,” Carter told NBC News before arriving in Brussels for a two-day meeting of NATO defense chiefs.

“That has long been our plan and we will be capable of resourcing both,” Carter said.

If Mosul falls, Raqa will remain as the only major city in either Syria or Iraq under ISIS control, the vestige of a cross-border “caliphate” the jihadists declared after seizing large parts of both countries in mid-2014.

An offensive on Raqa is likely to be far more complicated than the assault on Mosul however, because unlike in Iraq, in Syria the coalition does not have a strong ally on the ground.

Aid workers have warned of a major potential humanitarian crisis once fighting begins inside Mosul itself and civilians were already leaving in growing numbers.

An Iraqi minister said Wednesday that more than 3,300 fleeing civilians had sought help from the government the day before, the most for a single day so far.

There was “a big wave of displaced people… the greatest number since the start of the military operation,” Displacement and Migration Minister Jassem Mohammed al-Jaff said.

Numbers of displaced residents were growing but stood at a relatively low 8,940 on Wednesday, according to a UN tally, because most of the fighting so far has taken place in sparsely populated areas.

Civilians in villages on the eastern outskirts of Mosul were being bused to a camp near Khazir, an AFP correspondent reported.

“The army made us get out, they told us to leave and said we would see about the details of our settlement” in a camp, said Umm Ali, a 35-year-old woman.

“We used to live in terror night and day, the shelling was coming closer. The Islamic State controlled our lives, so we decided to flee,” said Essam Saadou, a 22-year-old student. – Rappler.com