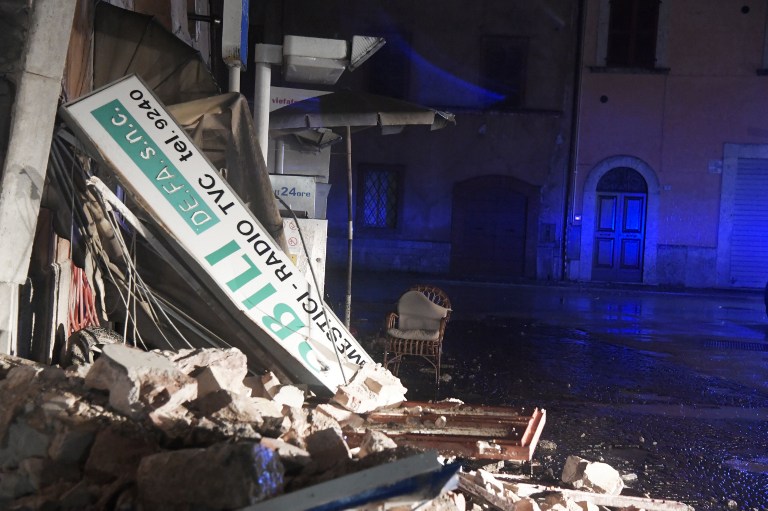 But rescuers working through the night and in the rain were struggling to assess the full extent of the disaster.

“Many houses have collapsed. Our town is finished,” Marco Rinaldi, mayor of the mountain town of Ussita, told Sky Italy television by telephone.

“The second quake was a long, terrible one,” he said.

“I’ve felt a lot of earthquakes but that was the strongest I’ve ever felt. Fortunately everyone had already left their homes after the first quake so I don’t think anyone was hurt.”

“Ultimately, the situation is not as catastrophic as might have been expected” given the strength of the tremors, he said.

The quakes were felt in the capital Rome, sending residents running out of their houses and into the streets. The second was felt as far away as Venice in the far north, and Naples, south of the capital.

The US Geological Survey (USGS) registered a first 5.5-magnitude quake at 1710 GMT, with the second two hours later. In both cases the epicenter was near the village of Visso in the central Marche region.

In August, a 6.0-6.2 magnitude quake flattened the mountain town of Amatrice – 70 kilometers (45 miles) from Visso – killing 297 people and injuring hundreds of others.

The area is also not far from L’Aquila where a powerful earthquake killed more than 300 in 2009.

After the second quake, Italian television channels broadcast images of collapsed buildings and people standing dazed in front of their toppled houses.

“It is not very easy to make assessments in the dark and the weather is bad in the whole region. We will have to see more precisely in the light of day,” said Curcio.

For people who are unable to return home immediately, civil protection has arranged accommodation in gyms and prepared to reopen some of the tent camps which were set up after the August earthquake. Many residents prepared to spend the night in their cars.

“I want to thank those working in the rain in the earthquake zones. All of Italy is wrapping its arms around the communities that have been hit once again,” Prime Minister Matteo Renzi tweeted.

In Rome, the quakes rattled windows and doors. The imposing foreign ministry headquarters was temporarily evacuated.

A Serie A football match between Pescara and Atalanta was halted for several minutes when the first tremor hit.

The mayor of Serravalle del Chienti, Gabriele Santamarianova, said the quake felt “like bombs were falling”.

“We saw a cloud of dust, we don’t yet know what has fallen down. We’ll see once the sun comes up.”

Castel Sant’Angelo’s mayor Mauro Falcucci told Sky: “There is no electricity. There are bound to be house collapses. On top of this there are torrential rains.”

The little town of some 300 people is near Arquata del Tronto, one of the areas worst hit in the August 24 earthquake.

In Ascoli, another town hit hard in August, the mayor said spooked residents were fleeing by car.

Schools here and around the affected region will not open Thursday to allow officials to carry out safety checks.

Italy’s national geophysics institute said the latest quakes were linked to the August one, which was followed by thousands of aftershocks, some of them very strong.

Visso’s mayor Giuliano Pazzaglini said telephone links in his town had been restored. But television images showed rubble piled outside a local church.

Around two-thirds of the deaths occurred in Amatrice, a beauty spot and popular tourist destination packed with holiday-makers when the quake struck at the height of the summer season. – Rappler.com